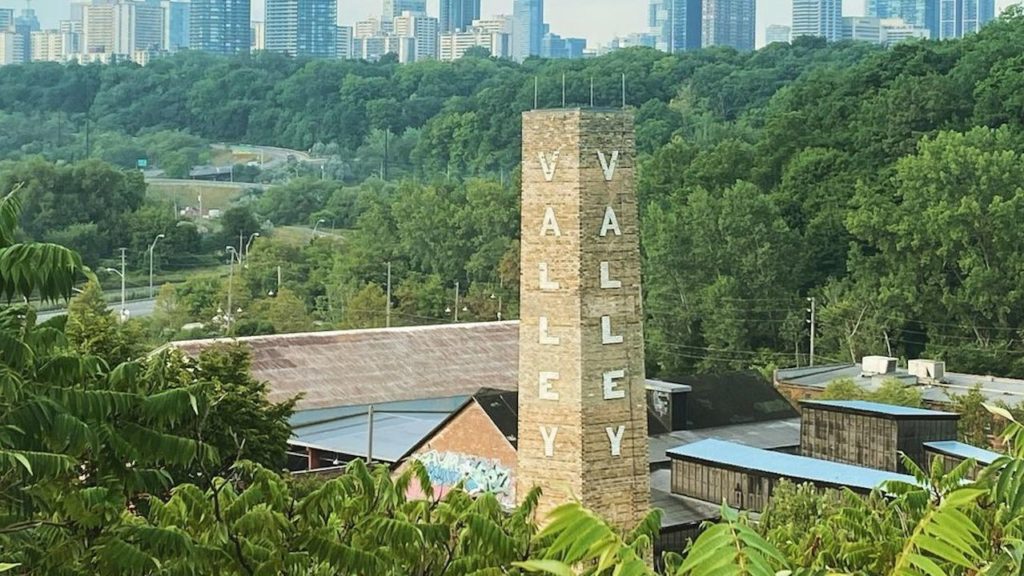 Known for its many arts and cultural events, beautiful walking trails and nature-inspired playscape, tens of thousands of visitors pass through the Evergreen Brick Works (also known as the Don Valley Brick Works) in Toronto every year.

But if you look beyond its modern reputation as a well-loved and highly celebrated community space, the Toronto Brick Works has a fascinating history.

Prehistoric wonders and a 200-pound beaver


Have you ever wondered why Toronto has so many waterways and valleys? It’s all thanks to the end of the last ice age, which saw the enormous Lake Iroquois shrink into oblivion. In its wake, it left large deposits of yellow Iroquois sand, glacial clay and wide stretches of the Don Valley, which open into what is now Lake Ontario.

Still viewable today, the Weston Family Quarry Garden’s north slope was the site of major discoveries throughout the 1920s by geologist A.P. Coleman. Here, he unearthed remnants of an ancient tropical seabed with fossils such as gastropods, crinoids, and plants. He also found bones of mammoths, mastodons, and even a giant prehistoric beaver who now resides at the ROM.

The Don Valley: home of the Anishinaabe for millennia

For over 7,000 years, the land where the Brick Works now stands was a thriving settlement of Anishinaabe people, who lived and farmed along the Don River’s edge.

Long before the use of slate and clay for brick production, the Haudenosaunee and later the Mississaugas used these naturally found elements for pottery, tools, and weapons — with artifacts scattered all through the ravine system. Displaced during colonization in the 1700s, the history of these communities has been under-acknowledged.

The rise of an empire: one brick at a time

It all happened by chance when the Taylor family, who owned the neighboring Todmorden Mills, decided to expand their paper mill.

Out digging fence posts, one of the three Taylor brothers discovered a massive amount of clay. With innovative thinking, the brothers decided to test-fire the clay for quality. To their delight, it produced a beautiful red brick. The wheels were in motion. By 1889, they opened the Don Valley Pressed Brick Company.

Becoming one of the largest and best brick manufacturers in Canada, they helped to create many of Toronto’s historic landmarks, such as Casa Loma, U of T, Massey Hall and Queens Park — not to mention pretty much every house in the city.

At the height of production in Toronto, the Brick Works offered over 400 types of brick in numerous colours and styles, including enamelled, ornate, and moulded varieties — which won them several awards, including at the 1893 Chicago World’s Fair.

A phoenix out of the ashes: the Great Fire of Toronto


In April 1904, a fire of epic proportions lit up the night sky. Burning so fiercely that it was visible across the lake, the flames miraculously took no lives.

In the wake of the Great Fire of Toronto, building safety codes got quickly updated. What was once an over-densified tinderbox was rebuilt mainly out of high-quality brick.

Known for their superior brickmaking and variety, the recently renamed Don Valley Brick Company was the preferred supplier. With many of these buildings still around today, Don Valley bricks essentially rebuilt our city.

Despite their brief success as brickmaking entrepreneurs, in 1901, the Taylors went bankrupt and sold the quarry to brother-in-law, Robert Davies, who owned a nearby brewery. The new owner was a shrewd businessman and successfully turned things around.

With ownership changing several times over the century, the massive 40-acre-wide quarry continued to provide many locals with work and produced tens of millions of bricks a year.

Shipped across the continent to places like Montreal, Chicago, Detroit and even Vancouver, Don Valley bricks are everywhere.

Throughout the 1930s, the Great Depression found many people homeless and living in valley shanties, but brick production continued to boom. In an act of goodwill, many individuals got permission to sleep warmly among the newly kilned bricks throughout the winter.

WW2 and the prisoners of war of Todmorden

Throughout the second world war, production slowed significantly because of the war efforts. Todmorden Mills became a POW (prisoner of war) camp for German merchant marines, and because of its proximity to the brick works, the prisoners found themselves labouring at the quarry.

Shortly after the war ended, the prison buildings were destroyed by vandals. To this day, it remains a parking lot.

An edgy underworld transforms into a green dream


Having produced bricks for nearly a century, the quarry fell silent in 1989. The massive pit got filled in, and the kilns left unlit. Business at the brick works had finally come to an end.

Toronto developers quickly planned to bulldoze the historic site to make way for condos. With a joint effort by groups such as “Friends of the Valley,” the plans were quashed.

Transformed into the Weston Family Quarry Garden, the grounds breathed new life as a nature park, but the brick factory sat derelict. Over the years, the buildings became a popular spot for underground parties, photo shoots, amazing graffiti and a farmers market that grew into Toronto’s largest.

In 2008, Evergreen stepped in with an eco-vision. Re-imagining the space as an urban green hub, they began transforming the long-neglected site.

In 2010, the doors opened to a trailblazing eco-centre with a ton of recognition, including from National Geographic. The rest is history.