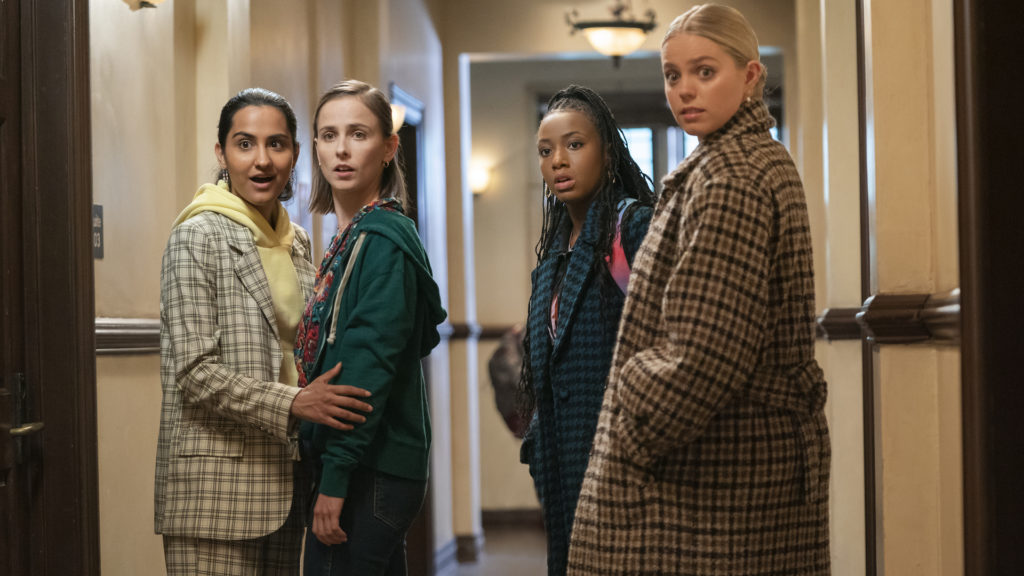 With season two of the Mindy Kaling hit show The Sex Lives of College Girls premiering this week, it’s hard to imagine the show without Bela, the group’s fearless leader and sex enthusiast played by Amrit Kaur. But the Toronto actor almost didn’t audition at all for the show. The reason? Because she’s Canadian. Everyone auditioning for the show from outside the United States needed an O-1 visa, which allows people in the arts to work in the U.S. for three years.

“My manager at the time said that if they like your work, they’ll go for it anyway. But I had a callback, and they cancelled my callback because they found out that I didn’t have the visa,” Kaur says.

She says her manager convinced someone that they’d be able to get her the O-1 visa quickly, so she auditioned again only to find out that she didn’t get the visa. At that point, she applied a second time, this time with the help of her entire team and the team behind The Sex Lives of College Girls (including Mindy Kaling herself) pleading her case to the immigration office.

But Kaur says that aside from the factual story of how she got the part, the real reason she ended up here is something much deeper. “I think the way I got called to this show is by accepting the way I look,” she says. She says she spent so much time trying to change her nose or being very conscious of it, and had to figure out how to “accept her face.”

“I realized I don’t need to look like the 1 per cent to tell a story. There are a lot of people who will relate to a woman who looks like me, and I should be big and bold in my personality to empower them,” she says. “And that, I think, called Mindy, because that’s what Mindy is.”

Kaur plays Bela in The Sex Lives of College Girls, a character who certainly embodies that big and bold personality, especially in relation to sex. But Kaur says her university experience – at York University’s theatre program – was far from Bela’s college experience of parties, experimenting with sex and stepping outside of her comfort zone.

Kaur grew up in Markham, and her family comes from a village in Punjab, an Indian state. “I came from a very sheltered place, very conservative, so I wasn’t allowed to go out much, and I didn’t have my sexual awakening until much later,” she says. “So I am very much living vicariously through Bela. And not every South Asian experience is my experience or Bela’s experience – I would love to see even more specificity in all the different cultures that are in South Asia. That’s the next step in Hollywood, I think.”

Kaur says she’s learned so much from playing Bela, including starting stand-up thanks to Bela’s love of comedy. “I learned a lot from her bravery when it comes to exploration, and the fact that she doesn’t [subscribe] to any labels,” she says.


Season two, which premieres on Crave in Canada on Nov. 17, picks up where it left off, with Kimberley, Whitney, Bela and Leighton returning from their Thanksgiving break and happy to reunite. Bela is navigating the start of her own all-female comedy troupe while dealing with the trauma of the sexual assault she experienced from a member of the college’s official comedy group. And while she has certainly grown from the first season, Kaur says Bela is still stuck in a similar pattern – seeking external validation.

“She’s very much still addicted to external validation in season two. And she gets in trouble. She still wants to f**k the famous guy, she wants to be the head of a magazine, she wants to be on top,” she says. “She’s addicted to being the person in power as a result of her trauma. And that approach makes her very sad and forces her to face herself by the end of the season.”

Kaur says that while season two doesn’t specifically address Bela’s trauma, but she wanted to show that there was a change in her in the way she carried herself and the way she said her lines. “I myself have been through sexual assault and harassment. I think, unfortunately, a lot of us women have. There’s not one way to deal with it,” she says. “So if Bela encourages people to find healing and share their story with someone and seek help, I think that’s great.”

The new season is full of all the college hijinks we loved in the first season, but with some new and surprising story arcs for a few of the leads. From a rambunctious strip show to raise money to party planning gone wrong, you’ll find yourself rooting for all four women – and here in Toronto, we’re rooting for Bela even harder.