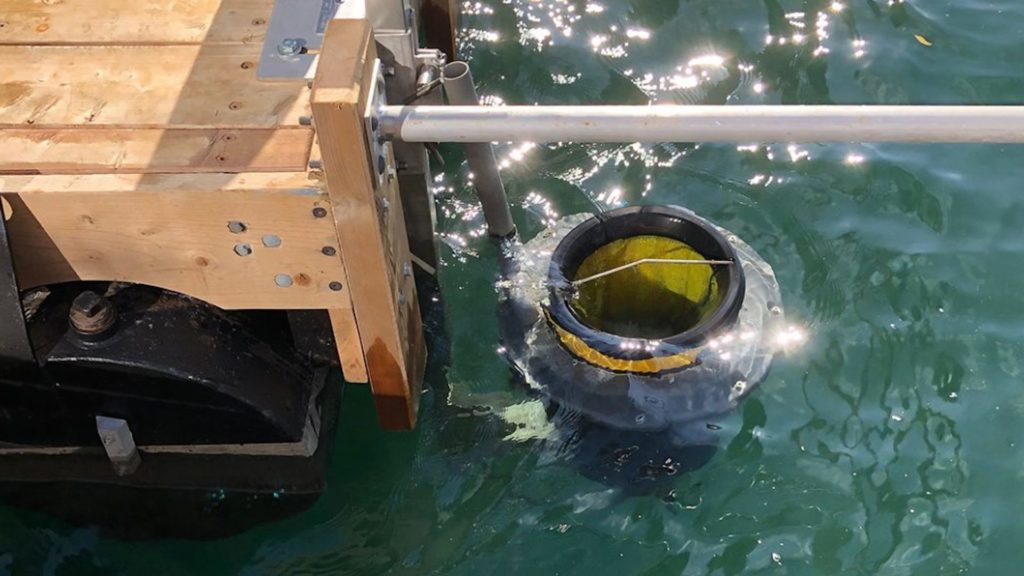 Toronto is getting a new waste removal system that is straight out of WALL-E. Ports Toronto, the Waterfront BIA and the University of Toronto Trash Team have joined forces to deploy a fleet of Seabins along the Toronto waterfront to suck floating litter out of Lake Ontario.

What is a Seabin, you might ask? “Think of it as a floating trash can,” says Cassandra Sherlock.

As the community outreach and research specialist with the University of Toronto Trash Team, Sherlock has been with the Seabins project from pilot to present.

“Essentially what it does is it creates a suction within a 50-metre radius,” Sherlock says, “so anything that’s floating on the surface within the radius will eventually be sucked into the catch bag.” From there, the bin needs to be emptied once a day, just like taking out the trash at home.

For Oliver Hierlihy, the Seabins are a welcome alternative to dealing with floating trash in the harbour. During his time as the director of operations for the Waterfront BIA, he says he has seen the ongoing frustration caused by trash in the harbour first-hand. “We actually went as far in 2019 as to buy our own nets to try and scoop out the garbage from the water ourselves,” Hierlihy says. “It’s a ton of work.”

Through a partnership with the City of Toronto’s BIA Office Innovation Grant, Hierlihy and his BIA are involved with sponsoring the Seabins project.

The Seabins, which are set to become fixtures on Toronto’s waterfront, are the culmination of a project that initially began with the thought of installing a “trash wheel” (akin to the one in Baltimore) somewhere within the Toronto system. While this never materialized, Seabins were seen as a cost-effective alternative. Thus, a pilot project was launched.

Something neat is happening at @OHMToronto today!

Three Seabins were set up along the waterfront, with their plunder set to be analyzed by the Trash Team. Over the course of 19 weeks, the Seabins pulled 85,000 pieces of “small debris” from the lake. Further analysis of the catch brought about an interesting discovery.

“We found that [the Seabins] are really effective at not only capturing big things like water bottles and takeout containers but small things like microplastics,” said Sherlock. Included within their findings were 11,000 pre-production pellets as small as two millimetres. The ability of the Seabins to capture items this small is a huge benefit, according to Hierlihy.

“Before, they did manual cleanups where they were just getting rid of large debris,” Hierlihy says. “With the Seabins removing microplastics, that’s really the more ecologically important element.”

The Seabins are also a catalyst for potential policy changes. “By finding and understanding what we capture in these bins, we can target the source and then stop it upstream and prevent it from coming downstream,” Sherlock says. “If we’re finding a lot of these pellets, we can hopefully bring that to policy and try to bring light on this and prevent it from happening in the future.”

Hierlihy also sees analyzing the data gathered by the Seabins as a way to promote change. “Hopefully, we’ll have a meaningful impact with what we’re finding, but also with what we can advocate for, which is the biggest key,” Hierlihy says. “These Seabins will not clean the [entire] lake, but they will start to help us understand what’s in the lake and put an effort towards cleaning the lake.”

Sherlock also views the Seabins as a tool for community outreach. During a workshop last March, the Trash Team emphasized that the Seabins can be used for educational purposes. “We want to get Torontonians asking, ‘what is this thing in the harbour?’ and ‘what is it doing?’ so then we can educate them on what individual impact they can make and give some examples of the things we clean up,” Sherlock says.

With the installation of the Seabins now approved by city council, Sherlock is excited about what the new additions to the harbour will mean for both her team’s data collection and the quality of the waters.

“What would be really great is to see a high accumulation zone this year, put a Seabin in, and then go back next year and see that there’s maybe two or three pieces of litter instead of a swamp of it,” Sherlock says. “I think that would be the ultimate goal of this project.”