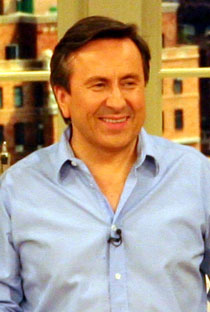 It’s happening again. It wasn’t even a month ago when everyone went gaga at the prospect of David Chang setting up shop in Toronto, and now we’ve caught wind that Daniel Boulud – a multiple Michelin-starred chef from NYC – has his sights on Toronto, too, but nothing is confirmed as of yet.

Our interest was first piqued by a Chowhound forum post, in which a user claimed to have met someone who witnessed the chef sign on to bring a restaurant to the Four Seasons Hotel in Yorkville.

We spoke to an individual at Four Seasons media relations who said “I can’t comment on anything,” but we were told that someone else could contact us with more details and are waiting on that.

We also contacted Georgette Farkas, a spokesperson for the chef. “He’s looking at a project in Toronto,” she told us. “Nothing’s signed, nothing’s confirmed.” Farkas did not disclose whether the project was related to The Four Seasons, but did say she would provide more information as it became available.

An interesting prospect, and who knows, maybe he actually has two restaurants in the works.

UPDATE: Alex Filiatrault, director of marketing at the Four Seasons Hotel, got back to us with the following: “We have not identified or entered any agreement just yet with any restaurateur regarding the new hotel, so no announcement has been made.”