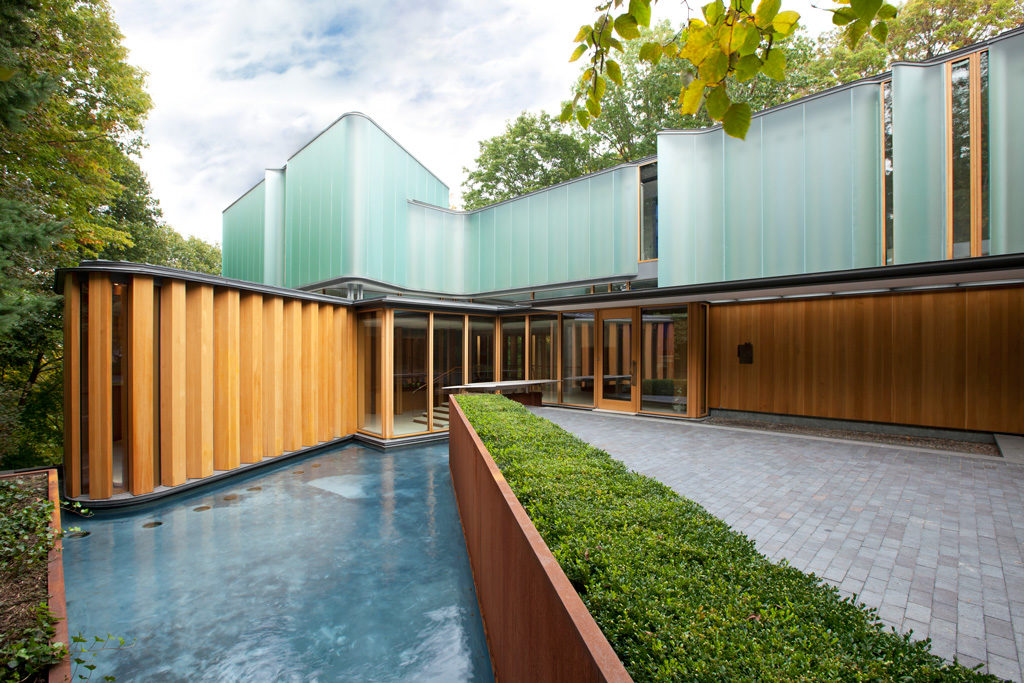 The Integral House, an acoustic and architectural wonder, commissioned by the mathematically-inclined mind and musically stirred soul of James Stewart (back in 1999), has become more than just a home, it has become an award-winning cultural landmark.

James Stewart was a professor at McMaster University and an accomplished mathematician, earning millions after authoring a series of best-selling calculus textbooks — but he also had a real penchant for music. Formerly a concert violinist who played for the Hamilton Philharmonic Orchestra, Stewart had grown accustomed to holding private concerts at his home. So when he embarked on the design of The Integral House, he did so with the intent of creating a larger, more elaborate space for musicians to perform.

The house at 194 Roxborough Drive was designed by architectural firm Shim-Sutcliffe Architects of Toronto. Construction began in 2003, after Stewart had purchased the property in Rosedale and demolished the former house that sat on it. The project was then completed in 2009, and Stewart was left with an architectural marvel that earned him a Governor General’s Medal in Architecture in 2012. Unfortunately, on Dec. 3, 2014 he passed away from cancer at 73.

The death of Stewart begs the question: What will become of this remarkable estate? The home was put on the market on April 22 for $28 million, with Paul Maranger, Christian Vermast and Fran Bennett of the Trilogy Team, Sotheby’s International Realty Canada overseeing the sale.

According to Paul Maranger, broker and senior vice president, sales, Sotheby’s International Realty Canada, the team remains confident that they will find someone who appreciates exceptional design and music as much as Stewart did.

The house was built with a performance space that can handle an audience of about 150 people, with vertical oak fins and glass used alternately throughout its design, providing sun shading on the exterior as well as contributing to the acoustics on the inside. The curved walls are instilled with the memory of concerts and cantatas, along with the remarkable people who have gathered within them to listen or perform. David Bowie and Iman, Adrienne Clarkson, Justin Trudeau, Philip Glass, Joshua Bell, and Measha Brueggergosman are just a few of the prestigious guests. The space also held fundraising performances by Soundstreams and the Necessary Angel Theatre Company.

Called “one of the most important private houses built in North America in a long time,” by Glen Lowry, the director of the Museum of Modern Art in New York, the four-bedroom and eight-bathroom house features 18,000 square feet of living space over five storeys that overlooks the Rosedale Ravine. The stairwell, ensconced in hand-blown laminated blue glass rectangles by artist Mimi Gellman and supported by cast bronze clips and stainless steel cables, complements the large upper skylight and is a work of art in and of itself.

The modern home also boasts an exercise room, sauna, and indoor pool with an integrated hot tub. The indoor exercise pool has a gentle current to swim against and when activated, the water level of the pool lowers and the adjoining hot tub wall acts as a waterfall. In the summer months, the approximately 30-foot-long window wall can descend down into the floor to open the pool complex to the outdoors.

True to form, earnings from the sale will be going to various organizations and companies Stewart believed in, including the Canadian Opera Company, National Ballet of Canada, Toronto Symphony Orchestra, National Youth Orchestra Association, University of Toronto Faculty of Architecture, St. Michael’s Hospital Cancer Care Ward, and others.

A feature-length documentary on Stewart and the house started before his death, it was entitled The Integral Man and is slated to be released in 2016.