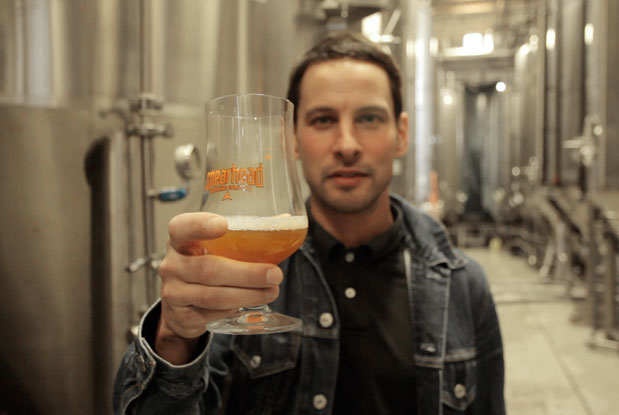 There's a new trend in the craft beer community—attaching a celebrity name to a special release. Recently, beers have hit LCBO and Beer Store shelves sporting well-known names such as Tom Green and Curtis Joseph (former Toronto Maple Leafs goaltender), amongst others. It's okay, we’re good with it. The Tom Green milk stout from Beau’s, for one, is delicious.

The latest beer slated for bar and restaurant taps across Ontario (as of June 14) is the Sam Roberts Band Session Ale from Spearhead Brewing Company. Sam Roberts is, of course, a well-known Canadian rock musician whose latest album is Lo-Fantasy. Roberts will be in town for Toronto Beer Week pouring his signature suds at the Spearhead booth.

Spearhead Brewing was founded in 2011 by Dimitri van Kampen. Post City caught up with Roberts to ask him about his introduction to craft brewing.

Tell me about your interest in brewing.

Oh well, I mean, I think it was time for us to just acknowledge we love beer, take the relationship to another level and show some commitment—make an honest woman out of her.

I’m assuming you did a fair amount of sampling to get this just right?

Ya, no doubt. That, to me, is the most interesting part of the process for sure, sitting there and trying to identify what it was exactly that we loved to taste in a beer, and try to hone in on something reminiscent of the things we love but also something new and different and our own.

Well, starting with colour, it has a beautiful colour to it—an amber golden ale. We didn't want it so dark that it was intimidating. The colour can really influence how you perceive a beer before you even taste it basically. It has the character of an ale, sort of even level of hops to it, little bit of a bite, some citrus-y characteristics, [and a] bit of caramel to it as well. To me, it is reminiscent of the great English pub ales, which was sort of the blueprint for what we were going after. The alcohol level is 4.4 per cent, so it's something you can have more than one of.

And how did you hook up with the folks at Spearhead?

They approached us, basically, and asked if this is something we’d be interested in attempting. And, you know, it’s definitely not on the day-to-day agenda. And even our long-term future planning did not include brewing our own beers until very recently. The reality is that we jumped on the chance to do it, just to do something different.

What are a few of your favourite craft beers?

Well, I recently tried Heady Topper, out of Vermont. There’s so many. I live close to Vermont, and there and Quebec there is a long-standing tradition. Now I'm basically drinking Spearhead, there's competition within the company, and so many good beers they are brewing right now.

And what’s the best beer to have while listening to Sam Roberts?

Well, it’s going to be the Sam Roberts Session Ale that’s for sure. It’s scientifically brewed to perfectly harmonize with the sounds.

What further promotions will you be doing?

Well, it’s certainly not going to be taking over my day job, but we’re going to go to a craft beer festival in Toronto for the launch and who knows? It’s really wide open, I’ve really enjoyed being a part of it.

What music goes best with a few pints?

Definitely rock 'n' roll. Rock and beer go hand in hand, you know, [and] reggae also, they go very well together. But throwing on a Rolling Stones record in the afternoon, and having a few beers — definitely those two things were created for each other.