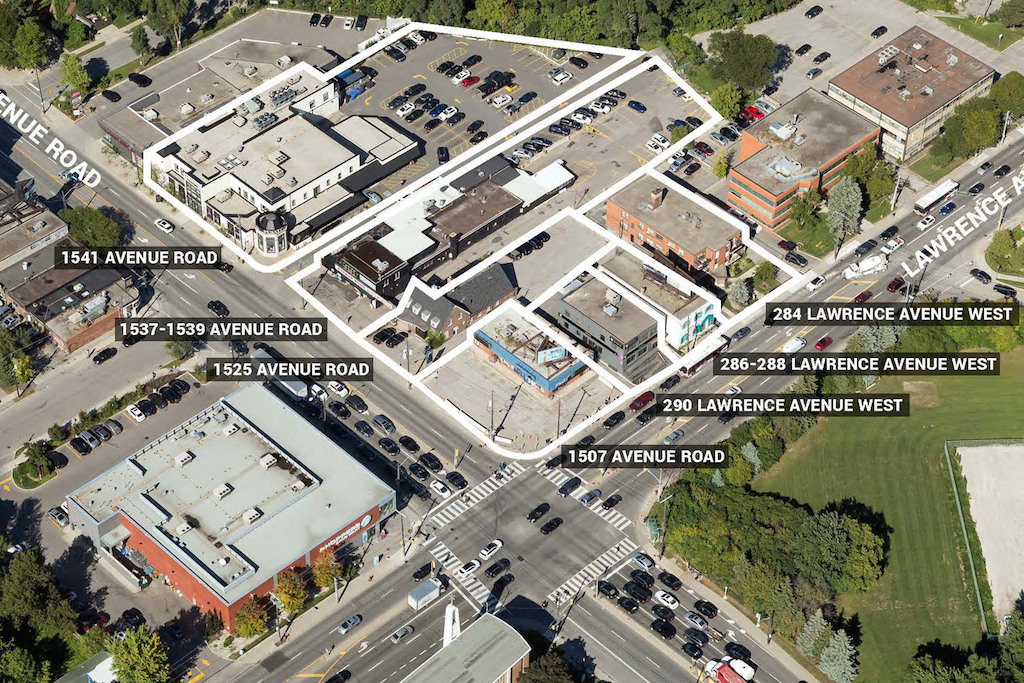 A revised development application for Avenue and Lawrence at the site of high-end grocery store Pusateri’s will go before city council this fall.

The application for 1507-1545 Avenue Road and 284-290 Lawrence Avenue West was resubmitted on Aug. 10 after concerns over its previous proposal in 2020. Developer First Capital Holdings now calls for two buildings 14 and 10 storeys in height and 532 residential units, an increase from the 455 units previously proposed and 13 storeys for one of the buildings. This application does not include 1549 Avenue Rd., which abuts Pusateri’s and is home to the store Royal Lighting.

In 2020, four residents’ associations jointly signed a letter to North York Community Council outlining concerns over traffic and that no greenspace was included in the plans. First Capital has since added a nearly 1,000 square feet public park on the site and has acquired an extra building at 272 Lawrence to give more breathing room. The developer will also now incorporate a new access road going north-south between its site and 250 Lawrence, which is currently under construction, to aid with traffic concerns. A traffic light will be installed at the intersection.

Local councillor Mike Colle told Post City that traffic has always been a problem in that area given the busy medical centre at 250 Lawrence, and so the new traffic signals will help improve safety greatly. Overall, Colle is supportive of the application given its midsize-range height, as other applications in the area have reached up to 40 storeys.

“This is much lower density and height than what I’m getting with other applications,” Colle said. “This is a welcome change to see buildings that have are mid-size range.”

There will also be a new privately-owned public space of about 364 square metres as part of the development to allow pedestrians to cut through, and the sidewalks on Lawrence will be widened. Colle looks forward to the new residents joining the area to give a boost to local businesses, though it isn’t clear whether Pusateri’s will remain at the location.

Bedford Park Residents Organization President Ted Butler is also pleased with the new application after he said the developer went “back to the drawing board.”

“There’s a lot of respect for both land-use and the neighbourhood continuity, and not over-building,” Butler said. “Their proposal has been fair given some of the comparable ones that we’ve seen in similarly designated intersections.”

Butler hopes that Pusateri’s will remain at the location, and said it will still be available through much of the construction.

The application should go before council in November or December to get final approval, Colle said.