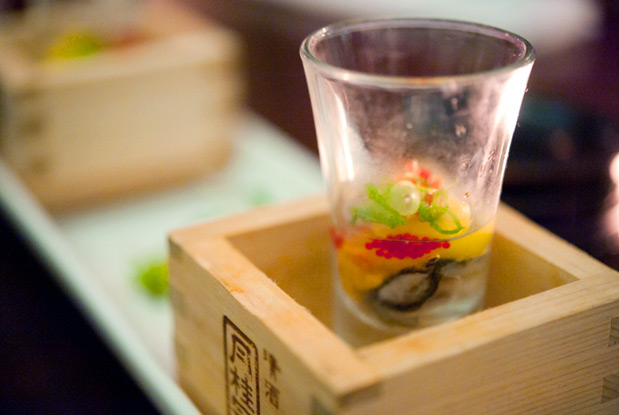 Opened in 2008, Yuzu No Hana on Adelaide has become a name synonymous with great sushi in the heart of downtown Toronto. Despite its location along club row, this chic, upscale Japanese restaurant has stood the test of time (and a recession, so that’s got to count for something). Owned by the same people behind Japango, one of the signature dishes of the family is the oyster shooter. Yuzu’s oyster shooter starts with a fresh oyster: silky with bright flavour. Next is a raw quail egg with a beautifully deep, creamy-sweet, yellow-orange yolk. To finish, there’s a touch of uni for a savoury-sweet flavour, bright red tobiko for a tiny bit of crunch and green onion for an extra pop and garnish. For $7, it’s a well thought-out dish with colour to appease the eyes and texture for the mouth. Like many of Yuzu's other dishes, it comes presented in a wooden box, complete with Japanese markings, that highlights how the restaurant's menu concept is part traditional in its arrangement and its use of classic Japanese ingredients but has all the fixings and intricate detail to make it a dish worthy of a high-end restaurant.