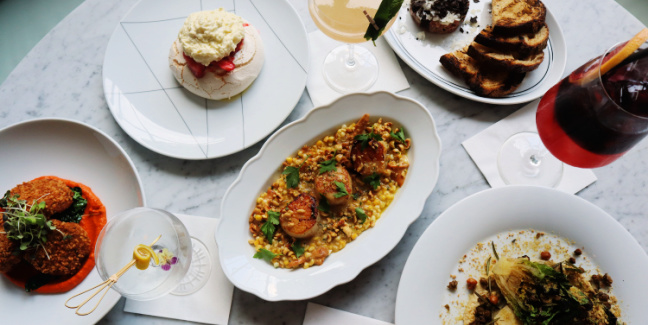 “Amanda and I chose this location because we wanted to bring our touch to this neighbourhood,” says Goodfellow. Vela pays homage to glamorous hotel lobby bars with its retro-meets-modern design, menu rooted in classic American fare and a cocktail menu inspired by places both real and imaginary. “It shouldn't really be about coming in and bowing down to the food and drinks. There’s going to be a band, there’s going to be interaction and the food just needs to be tasty,” says Goodfellow of the concept. Although there is plenty of meat on the menu (including a section dedicated to steaks), many dishes put a vegan spin on familiar favourites. The artichoke cakes, for example, are a play on crab cakes that come served with a swirl of romesco plus dandelion, kale and black olives. “We always wanted to have a vegan feature,” says Goodfellow. The Vela Caesar is another stealthily vegan dish, featuring crispy chickpeas in place of bacon bits along with sunflower Parmesan. The beef tartare gets a luxe, savoury finish of truffles and Parmesan and comes served with beautifully charred slices of grilled sourdough. The pan-seared scallops rest on a bed of corn puree, hazelnuts and chanterelles — an unexpected combo that pays off in the delicate balance of sweetness brought by the corn and scallops. You’d be hard-pressed to imagine an old-school hotel bar that doesn’t offer cheesecake as a final course and Vela riffs on this idea with its pavlova, which sees light, crispy meringue finished with cheesecake foam, pink peppercorn, strawberries and lemon curd.

Vela's cocktail menu features four themed sections: champagne-based drinks; “vacation drinks” inspired by different cities around the world; classic cocktails; and “reality check” cocktails, which are influenced by bars featured in movies and TV shows. The Jack Rabbit Slims, for example, is named after the bar in The Shining. The Mari is a show-stopping drink from the champagne cocktail section. Martini fiero, grapefruit, oro blanco and sparkling red create a lovely, layered effect in the glass. The London, from the “vacation drinks” section, is a spirit-forward twist on a Vesper made with
no. 3 gin, Stoli vodka, lime stone, white vermouth and tarragon.

“I basically took the hundreds of popular classics and I took 30 that I wanted to improve,” says Goodfellow of the global classic cocktail section, which includes drinks like this Old Cuban with Bacardi 8 rum, lime, sugar, mint and sparkling wine. The cocktail menu also includes a section of alcohol-free “placebo cocktails” like the Helter Seltzer, a revival from Goodfellow’s erstwhile bar with Grant van Gameren, PrettyUgly. Red nomaro and tonic give the drink a pleasantly bitter, Campari-like flavour.

Vela's wine list continues the emphasis on champagne and sparkling with several European by-the-glass or bottle options. There’s also a few skin-contact bottles, as well as a mix of Old and New World whites and reds available. The brief beer list offers a handful of mainly local brews. Curated by architecture studio Partisans, the interior’s most eye-catching element is integrated LED ceiling lighting. Its wave-like pattern is reminiscent of the undulating design lines of Bar Raval. Vela was designed with acoustics in mind, with Goodfellow noting that they eventually hope to host live music performances. In addition to its 4,000 square-foot interior, the restaurant also has a 2,000-square foot patio that’s heated for when the temperatures drop. With Vela originally slated to open in early 2020 before the pandemic hit, Goodfellow and the team are excited to finally see the restaurant come to life after a long wait. “I've done 11 openings. If I had known that I was going to have to go through something like this, I would have really felt blessed about how hard my past openings were,” says Goodfellow. “But the reviews have been just so nice. I can’t believe how positive the response has been so far.”