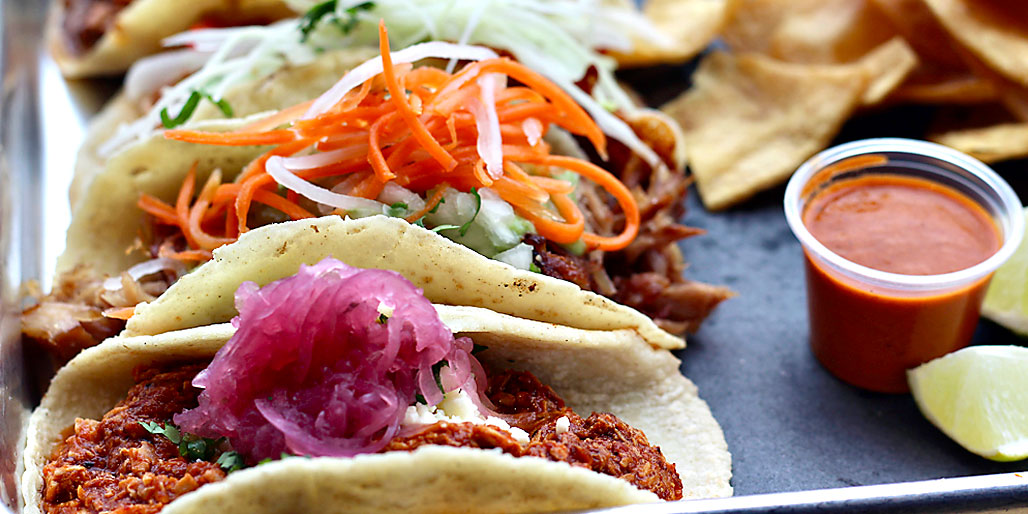 Decidedly more than a food court, The Annex Food Hall has been opening its doors slowly since the beginning of February. But now, the new community-focused food hall is in full, vibrant swing. The co-op of elevated casual fare, which takes over for the once-infamous 24-hour snack provider Bloor Superfresh, is an amalgamation of seven Toronto-tested restaurants, serving up fast eats at affordable prices, without sacrificing flavour or quality ingredients.

The 98-seat hall is exceptionally spacious, clearly having been stripped down to post and brick. The industrial quality is both modern and comfortable; with communal, light wood picnic tables, concrete floors and black-painted exposed stone walls. With the help of DIALOG, the multi-city design firm, The Annex Food Hall has taken a relatively unremarkable space and turned it into a ideal locale for casual hangs, business meetings and family meals.

Owners Jae Pak and James Lee have known each other since high school, and had worked together previously. “We always had a great positive energy working together,” says Pak of his co-owner. “Taking over the old Bloor Superfresh was James’ idea.” Taking notice of the recent trend of food halls in Toronto, the two thought Toronto’s Annex neighbourhood could use a similar type of concept. So Lee set about to carefully curate a list of quality food vendors that would fit the space’s casual hangout vibe.

“All of the vendors had great reputations and existing businesses in Toronto,” says Pak. Of the seven vendors, there is truly a bit of something for whatever you’re craving, making The Annex Food Hall the perfect destination for a group of diners all desiring a different type of nosh.

Try the scrumptious k hao soi ($13.95) from Eat BKK’s unbeatable Thai kitchen, tasty tacos (3 for $13) from El Naual Tacos or a healthful vegan bison salad ($10.84) from Urban Herbivore. From coffee to, homemade vegan spaghetti and tomato sauce ($8) at Dal Moro’s, to a fried chicken sandwich at PG Clucks (the jalapeno & honey for $9 is particularly ooey gooey and fantastic), The Annex Food Hall really does have everything you need.

Operations manager Darrin Harkins is working with the owners to secure an upcoming bar and liquor license so mom can get a cocktail while the kids sate their craving for a Montreal style smoked meat sandwich ($11.50) at Smoked Up Meats or some Mean Bao. So be sure to look out for that exciting option in the near future.

“We’re offering seven shared experiences,” says Harkins. “This is a friendly collegial atmosphere. It’s a community space that has been welcomed in this neighbourhood because we welcome all walks of life and all dietary limitations.”

The Annex just got a new food hall in #Toronto and we're having serious trouble deciding what to eat🍴🍜🙌 . Click the link in our bio for an even closer look at @theannexfoodhall ✔