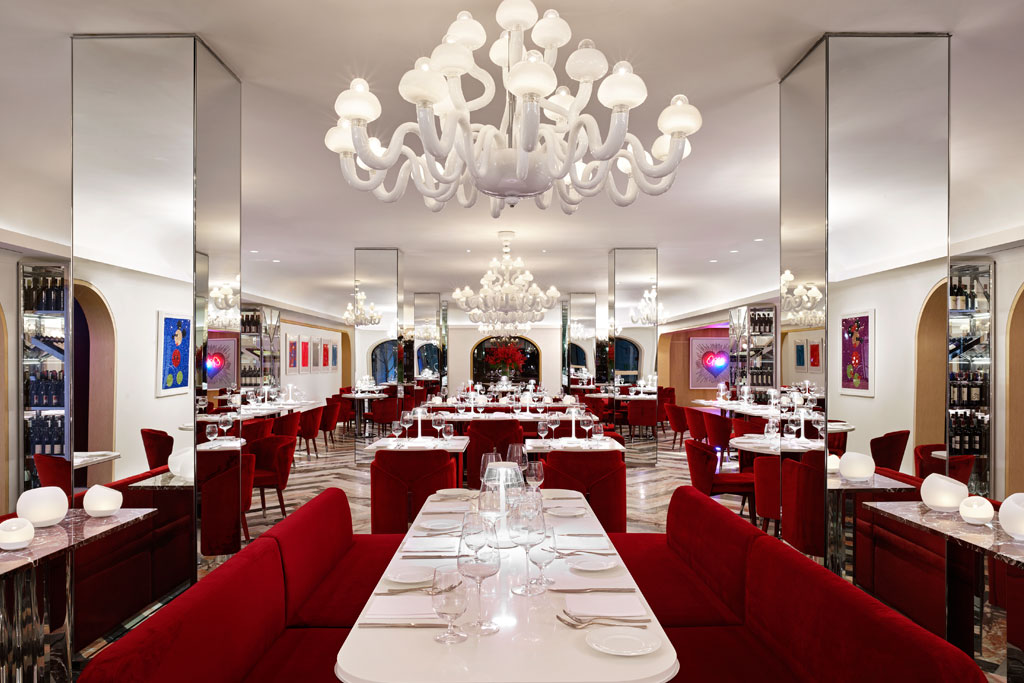 Just off Yorkville Avenue, the gorgeous new Sofia restaurant occupies the the former home of chocolate purveyor Morroco and the legendary Coffee Mill restaurant. When we visited, owner (and T.O. club king Charles Khabouth was just outside talking with two staff members. He entered the restaurant with us, and discussed the new space as if we were old friends – even though we have never met.

He led us inside to the podium at the front where two well-trained greeters take our names and let us know the rest of our party is waiting in the bar. Behind the podium is a version of the Mona Lisa by Jeff Koons. Khabouth tells us that this piece, and many others in the restaurant, are from his personal collection.

We meet friends at the bar—a round room with a bright, beautiful mural. The vibe is 1970’s glam meets 2018 opulence. The crowd is impeccably dressed: the men are in blazers and ladies mostly wear sleek black or white attire.

Concocted by former Blowfish barchef Nishan Nepulangoda, the cocktails veer on fruity and refreshing, relying on house-made cordials and syrups in unexpected combinations.

Nights of Cabiria ($22), for example, named after the 1957 Federico Fellini film, combines zesty Japanese yuzu and sweet and refreshing grapefruit syrup with the kick of jalapeño black pepper over vodka, aperol and Cointreau, creating a patio-ready, intensely sippable treat.

Once we are served our drinks we are whisked into the main dining room which has all-white walls and oval tabletops, chrome accents and plush red velvet chairs. The lighting is impeccable, with LED Philippe Starck table lamps and stunning white chandeliers. I am hard pressed to think of a Toronto dining room that has lavished this kind of money on impressing its patrons.

A white baby grand piano on a white circular podium graces the front of the room. It is played by a white vested pianist. While the walls, as Khabouth promised, feature a stunning Mr. Brainwash, as well as a series of Warhols and other modern stars.

Sofia's menu focuses on the purity of ingredients, leaning on traditional flavours and modernized by plating.

“Italian cooking is all about local, seasonal ingredients, and you can take that concept anywhere and apply it to what you’re doing,” explained executive chef Christine Mast, who previously cut her teeth at Canoe and Oliver & Bonacini Restaurant Group. “It’s about using the freshest ingredients at the peak of their ripeness and highlighting that.”

The insalata di arance($15) is an elevated citrus and fennel salad made with blood oranges, clementines and grilled fennel, topped with chunks of Calabrian olives. Rustically presented and dressed with nothing more than maldon sea salt and olive oil, this palate-prepper highlights the flavours of the season without any competing ingredients.

The mozzarella di bufala ($22) also combines simple, pure ingredients. After searching far and wide, Mast found a Quebec producer that makes buffalo mozzarella from their own herds. It’s sprinkled with a handful of salty fava beans and served with some super-crispy Sardinian flatbread.

We loved the orecchiette ($26), with its simple handmade pasta ears scooping up flavourful chunks of lamb ragu and saffron-infused raisins in a pool of olive oil. The branzino, a seasonal Mediterranean sea bass ($39) was served whole, seared at the edges and lightly garnished with little more than simple olive oil, oregano and lemon.

However, for a restaurant for which the executive chef also serves as the pastry chef, the desserts took the literal cake. Sofia served up a densely formed, lightly flavoured clementine semolina cake, soaking in clementine syrup. It brought to mind a Québecois-style pouding chômeur, but with the cloying sweetness replaced with a fresh citrus tang, sitting pretty on a swipe of basil cream.

“We just tried to take really authentic Italian cooking and bring it into the modern day, just by elevating the plating but keeping true to the flavours and the kind of charm that Italian cooking really brings,” said Mast.

With Sofia, Charles Khabouth, who paced the opulent room all evening assisting and encouraging his team, is truly wearing his heart on his sleeve—and the restaurant shines because of it.