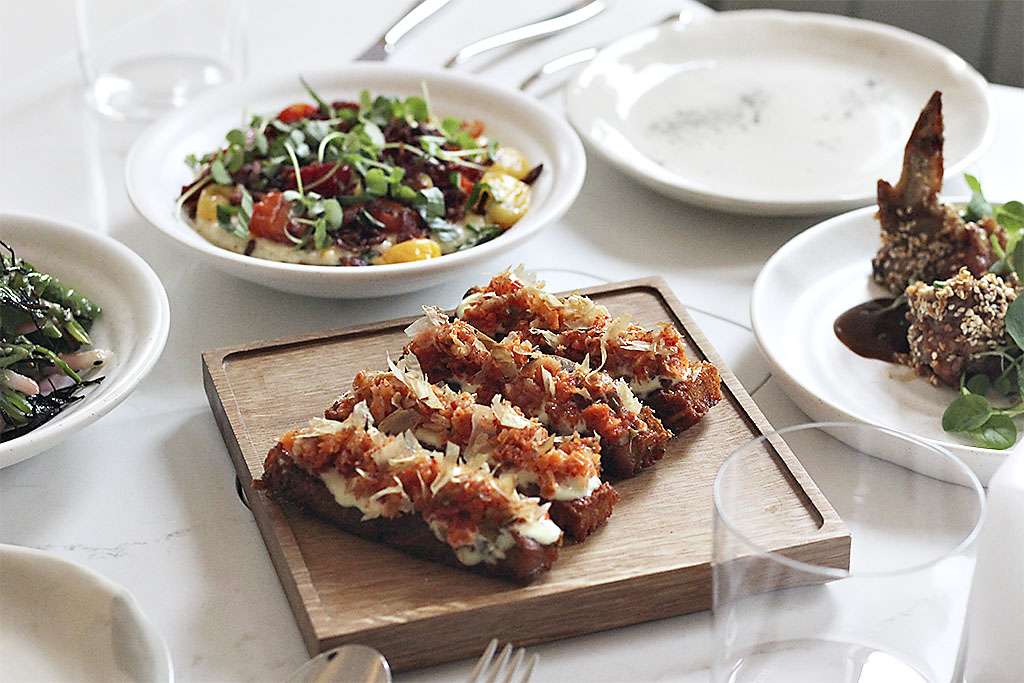 Sara, a new globally-inspired fine dining concept by the Food Dudes, is the culmination of a decade-long career in Toronto's food scene.

In ten years, the Dudes have launched a food truck; their take-out counter and catering arm, Pantry; the southern eatery, Omaw; the subterranean, upscale-industrial gastro-shack, Rasa and their take-out pizza chain, Blondies. With the new highly anticipated launch of SARA, they’ve finally filled out their punch card.

“We feel like we’ve checked off the last box that we wanted to,” says Adrian Niman, founder, co-owner and executive chef of the Food Dudes empire. “I think for us, this is the last one. We’ll consult in the future, but there’s no need to keep opening more restaurants.”

Stepping off a chaotic stretch of Portland Street, near Adelaide, and into Sara feels like getting hit in the face with a heady breeze of tranquility. The details are immaculate and deliberately thought out, like marble tables, designed by Spanish-Canadian design firm Odami, which have waved edges, so as not to introduce any sharp lines into the space. They also come with little inlaid boxes underneath the table’s surfaces, covered by a heavy lid, made specifically for stowing cell phones and other distracting accoutrements.

“It really goes with our theme –– to disconnect and reconnect,” said Niman. “These days, everyone’s just all about getting their phones out, taking pictures, texting their friends, and it kind of defeats the purpose of being out at a restaurant.”

Air purifiers eliminate the pollution and debris from outside, while built-in speakers lay flush to the wall. Large windows and skylights flood the space with natural light.

“Less is more was definitely part of the approach,” he says.

And the same applies to the menu. Over the last few years, the team traveled widely: They went to Tokyo, Tulum, Chicago and New York. Inspired by Japanese simplicity and attention to detail, they set out to create Sara, which means “little plates” in Japanese, and structured their menu around four categories: small dishes, dumplings, r​obata (a style of grilling over Japanese binchotan charcoal), and s​weets.

Niman insists that they aren’t strictly a Japanese restaurant, and it’s true that they aren’t. Their techniques are culled from around the world, incorporating ingredients like schmaltz, Asian pear, poblano cashew cheese and more.

“It’s a collaborative effort. Everyone’s coming from a lot of walks of life,” says Mary Dinh, the head chef at Sara. “I grew up in a Vietnamese household [with] a Persian stepfather. Living in Toronto, you get a lot of influences. It’s taking everything we knew and combining it to make food that we enjoy. It’s not strictly personalized, which I feel is what Adrian and the Food Dudes is all about.”

As a result, there are dishes like chicken wings stuffed with Cantonese-style shrimp, rolled in sesame and quinoa, with a sauce of Chinese mustard and hoisin, a delectable take on the dim sum classic of both har gao and siu mai.

There’s also the b​incho broccoli, charred over the binchotan and served with kohlrabi cakes and tossed with a Vietnamese fish sauce vinaigrette.

“We wanted to use the entire broccoli from crown to stem, so we take the stems and mix it with kohlrabi, to make this kind of cake that’s very similar to turnip cakes you would get at a Chinese restaurant,” says Dinh.

Diners may be intrigued by their party sandwich, an ice cream sandwich unlike any other: It’s chocolate tahini ice cream, between a chocolate cake in a puddle of miso caramel.

“I discovered miso and caramel and I really love the flavour and wanted to incorporate it into the menu,” says Dinh. The chocolate and tahini combination, she says, plays off the nuttiness of chocolate and peanut butter.

“It’s a different kind of nuttiness that appeals to a lot of people with nut allergies,” she says.