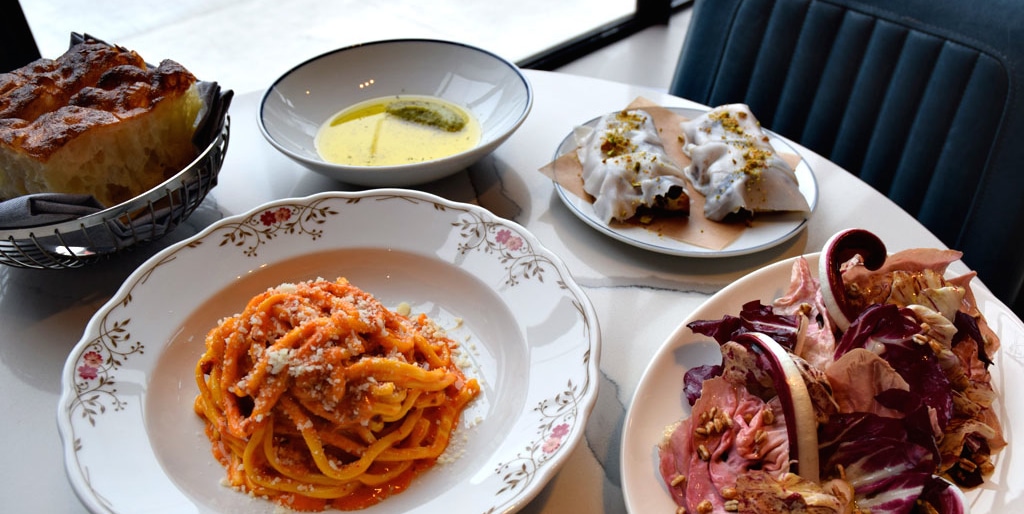 Osteria Rialto is the flagship restaurant in the historical Paradise building which also houses Bar Biltmore and Paradise Theatre.

The restaurant, spearheaded by executive chef Basilio Pesce and bar director Robin Goodfellow (Bar Raval and PrettyUgly), takes its inspiration from non-regional Italian cuisine, using ingredients found in Ontario. This means Rialto is dedicated to Italian tradition and technique, but not bound to authenticity.

The bar program at Osteria Rialto is inspired by French cocktails you might receive on the Italian border. Imagine sipping a French 75 on the Amalfi coast, you get it.

When conceptualizing the menu, Goodfellow decided to match the idea of non-regional Italian fare and play off classic French cocktails using Italian aperitivos and liquors.

Executive chef Basilio Pesce and chef de cuisine Ryan Baddeley have created a menu of Italian fare that riffs off the classics, but includes new and exciting flavours. “It’s hard to do absolute traditional Italian food in Ontario, it really pigeonholes you into what you’re able to create, but if you take that original attitude towards food or ingredients, you come up with these dishes,” says Pesce.

The housemade focaccia and Alhema olive oil ($6) stand alone as it’s own dish. Made with Alhema olive oil from Spain and a puree of Castelvetrano olives, this simple dish highlights the quality ingredients and pure, simple flavour. Crostini of lardo and cherry mostarda ($8) epitomizes sweet and savoury. Made with amerana cherries, toasted focaccia crostini and topped with shaved lardo and chopped pistachio, this dish is the ideal snack to enjoy with a glass of vino. The Radicchio and Beet ($15) is a fresh take on a beet salad. With large curls of radicchio and slices of red beets on a pistachio puree, this salad arouses all the tastebuds. The dish is topped with puffed farro for an added crunch. The star of the menu has to be the n’duja carbonara ($24). Using the same technique as a classic carbonara, the dish highlights the Calabrian sausage, instead of guanciale, to innovate this Roman specialty. Pesce says this idea is the inspiration behind the entire menu. “Where it’s using the same philosophies or approaches to ingredients that you would find in Italy, we’re using what we can get in Ontario.” Dessert pastry chef Jill Barber is creating some edible arrangements that look almost too good to eat. The winter chocolate cake ($12) is made with warm winter spices and brightened up with a pear puree. The peaks of ginger custard and chocolate ganache are decorated with silver dollars of Valrhona chocolate. "I wanted to do something like a mille-feuille," says Barber about the pastry offerings at Osteria Rialto. The apple crostata ($12) is a thousand layers of a caramelized pie dough with slow-roasted apples. It's then topped with ribbons of chestnut cream and lingonberry compote. This dish is accompanied by a side of calvados custard to pour over.

“Pretend that all these cocktails were invented in the southern part of Italy where the border meets France, " says Goodfellow about the cocktails at Osteria Rialto. Taking French classics and adding in Italian spirits, Goodfellow achieves a whimsical take on the favourites. La Rosa ($13) is an eye-catching cocktail with deep pink colour. Similar to a Negroni, the cocktail is made with dry vermouth, Campari and Luxardo Maraschino. The Italian Crusta ($15) is a spin on a Brandy Crusta. The cocktail has many famous variations, including the margarita. Goodfellow calls the amaro-based bevy “flavourful, powerful and bright”. The Via Del Corso ($15) is one of Goodfellow’s favourite cocktails on the menu at Rialto. The herby libation is classically made with green chartreuse, cognac and bitters. Goodfellow swapped out the brandy for the Italian amaro, Cynar to give it that extra Ital flare.

Osteria Rialto lives inside Paradise Theatre, a revamp of the original building that opened at Bloor and Dovercourt in 1937. Facing onto the street, the restaurant has an Art Deco feel but is more subtle in its design. The concrete walls remind one of a family trattoria somewhere in the Italian countryside, while the vintage sconces, decorative glass windows and leather touches give the space that 1930s flare.

Surrounded by windows, the narrow restaurant seats about 30, along with a semi-private dining table in the back of the space.

The large enclosed patio will be a big hit in warmer weather, adding twice the amount of seating to an otherwise somewhat narrow space. Perfect for people watching.