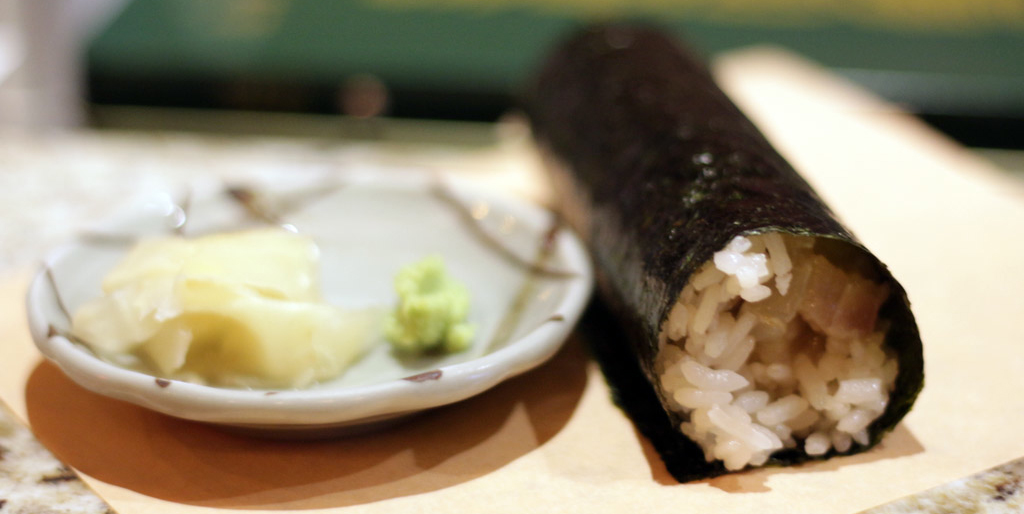 Omai is a Japanese temaki (hand rolls) and sake bar on Baldwin Street from Edward Bang and Jason Ching.

Bang made his first foray into Japanese food in Vancouver before attending the Culinary Institute of America in New York. He has worked at Michelin-starred restaurants such as Eleven Madison Park and Blue Hill at Stone Barns. His Toronto resume includes stints at Canoe, Patria and the now-closed Weslodge.

He and co-owner Jason Ching met through a blogger friend at a craft beer pop-up and from there, the duo went on to host a series of supper clubs out of Ching’s home before becoming business partners. Ching’s family also operated a Vietnamese restaurant, Wonderpho, in North York.

“Patience was running really low at the end,” says Ching of the near two-year hunt to find a space. Their only criteria were something “1,400 square feet and under,” and “anywhere in Toronto.” Before they saw the space on Baldwin, initial ideas included a quick-service concept of Korean rice bowls. But the wrap-around counter lent itself naturally to the temaki and sake bar concept, so that's what they settled on after finding the location.

The duo travelled to Japan prior to opening and frequented “many local, one-man operations” where one person would do everything from cooking and serving to making drinks.  And that’s very much the same culture that Omai is trying to build, as the culinary team often serves the food at the tables. “I wanted to give more back to our cooks,” says Ching regarding the equal distribution of tips between front and back of house staff.

The menu at Omai is a tapestry composed of threads from Bang’s culinary experience. “It’s a bit of Spanish, Korean, and Japanese-Asian influence,” says Bang.

Omai's menu is divided into two sections, temaki and kitchen items. Temaki are made-to-order and should be eaten immediately to ensure that the seaweed stays crisp. There is a selection of seven temaki ($4-$7), such as the tamago, a sweet egg “omelet” with truffle paste (a great vegetarian option) as well as red sea bream with lime and ponzu.

The kitchen menu is stacked with items such as beef cheeks ($15) on a bed of barley “risotto,” smoked butter and Fuyu persimmons. The fingerling potatoes ($9) are triple-fried and topped with house bacon lardons, mentaiko (salt-cured and garlic-chili fermented roe). For vegetarians, there’s also broccoli ($8) with crème fraiche, smoky pickled red onion, and Meyer lemon aioli.

Garnishes are seasonal as much as possible, currently featuring winter radishes, pears, apples and persimmons. There are also daily specials that are “something off-menu and not stuff going bad to pawn off,” says Bang.

Beverage selections lean heavily to Japan, mostly sake and beer with Godspeed as a local, craft brew option. There’s also an Ozawa 40 Shochu, aged two years in a sherry cask which “finished like a whisky and smells like rum.”

Omai is only open for dinner, from 5 p.m. to 10 p.m. from Wednesdays to Sundays.