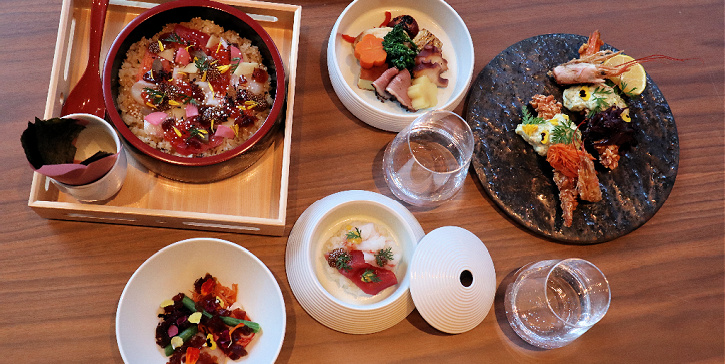 Minami is the latest Japanese restaurant from Aburi Restaurants Canada, the hospitality group behind Miku, Aburi Hana and Tora. It’s the second time the group, which also has several Vancouver restaurants, is bringing one of its successful west coast concepts to Toronto (the first was Miku, which made its Toronto debut in 2015 after seven years in Vancouver). Minami Toronto takes a cue from its sister restaurant in Vancouver, Minami Yaletown, but also draws inspiration from its setting in the heart of the Entertainment District for its theatrical menu and decor. Those familiar with Aburi Restaurants’ other concepts will recognize some of the core menu items, including the group’s signature flame-seared sushi, but Minami Toronto also carves out a new niche for itself with its focus on creative cocktails and Japanese small plates.

Headed by chef Jason Do, an Aburi Restaurants veteran who most recently worked as sous chef at Miku Toronto, the food menu features bentos, bowls and small plates designed to transition easily from evening bar bites to full dinners to late-night eats.

Like Aburi’s other restaurants, Minami emphasizes seasonal ingredients and Ocean Wise seafood, including oshi sushi, a rectangular style of sushi made by pressing blocks of rice and toppings in a special mould. Minami Toronto also introduces more meat-based dishes than its sister restaurants. Ebi furai feature with jumbo Argentinian prawns that are coated in soy crackers and deep-fried. It comes with house made tartar sauce, carrot kinpira and red cabbage. Cocktails, which blend traditional Japanese ingredients with playful global influences, are the core of Minami’s drink programme. With dine-in currently closed, the full cocktail menu has yet to be rolled out but the restaurant promises fun, flashy elements like cotton candy garnishes and drinks smoked tableside. The Oni No Chi, for example, is a spirit-forward cocktail featuring jalapeño-infused tequila, ginger and cassis liqueur,  and lime.

For now, Minami is offering its beer, wine and sake menu for takeout, which includes some interesting imports like Far Yeast Tokyo White beer.

Minami has given the former Penelope restaurant space a sleek makeover, creating a contemporary esthetic that plays with textures, woods, rich colours and dramatic lighting. Like all Aburi restaurants, Minami features a beautiful mural by Japanese artist Hideki Kimura. According to Dean Harrison, national marketing director for Aburi Restaurants Canada, the pandemic complicated the group’s usual tradition of flying Kimura in from Japan to paint the mural wall. Instead, Kimura shipped the artwork and it was applied directly to the wall in Minami.

Once dine-in resumes, Harrison says plans are in the works for a summer patio, as well as live programming like demonstrations of ikebana, the Japanese art of flower arranging. Minami is currently open for takeout and delivery via Uber Eats, Ritual, and Tock.

By Jessica Huras Posted on: Dec. 1