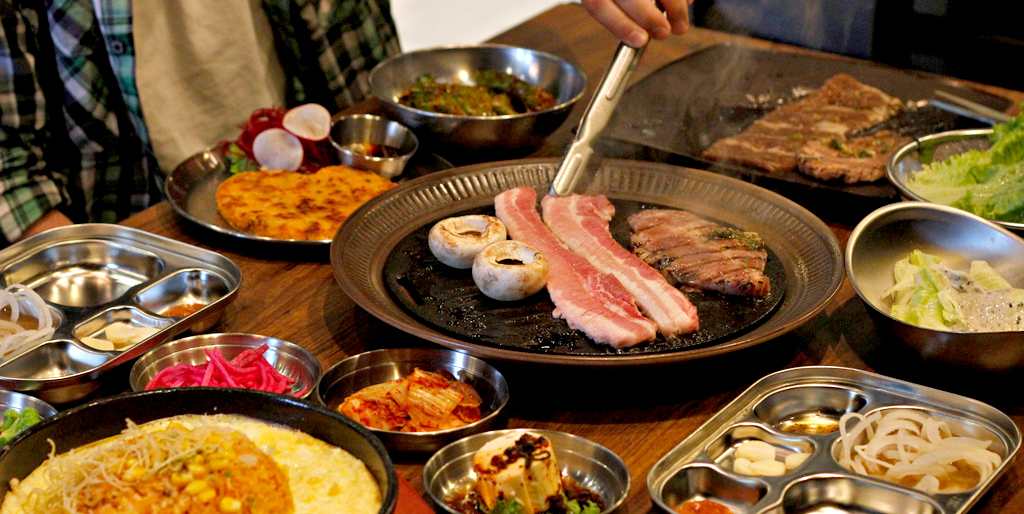 There are many Korean BBQ options across Bloor West, but few are located east of Bathurst, a move that Little Piggy’s owner Joeun Kim says was strategic.

“We didn’t want to be in Koreatown. We wanted a more mainstream area,” she explains.

Of course, it’s only a few blocks east, but the name Little Piggy’s might still ring a bell to the K-BBQ connoisseur. The sister restaurant to Piggy’s in Markham, a 5-year old staple that’s oft featured on the best of lists (especially for their naeng myeon “buckwheat noodles”), has made its way to the Annex and brought the same brand of traditional Korean food for a “younger generation”.

Kim moved to Toronto nine years ago from Anyang, Gyeonggi-do, a district in southern Seoul. Her mother operated Korean restaurants back home and she wanted to bring the traditional flavours and dining customs of her country to Toronto.

“Be sure to realize that a Korean dinner is a group affair. It's likely that you won't find the server willing to give a dinner menu when you come in alone,” a fact that took some getting used to when I moved to South Korea back in 2010. “Even though we're busy and eat on the run, you'll find that Korean dining means for two or more people. And I do think it's still preferable for many reasons to eat a meal together.”

Soju is also one of those beverages that’s best enjoyed with company, especially since there’s serious superstition surrounding pouring yourself a shot. There’s comes straight by the bottle, of course, or mixed  in one of their super sweet signature refreshments – blue lemon soju or grapefruit soju ($7.95/glass, $19.95/bottle).

When it comes to dining solo, Little Piggy’s has a few options, like bibimbap ($9.95) (spelled “bibimbob” on their menu), the classic mixed rice dish served in a hot stone bowl, various soups and stews like the iconic gamja tang “pork bone soup” ($8.95) and duejeon jjigae “soybean paste stew” ($7.95). For their unique UFO rice ($12.95), your choice of fried rice comes with various proteins and veggies served on a sizzling pan, surrounded by steamed egg.

Geared towards the neighbourhood students, they also have a takeout window serving “bob-to-go” ($7 tax in) rice bowls and affordable lunch specials ($7.95-$9.95) on weekdays.

For groups of two or more you can indulge in their remarkable induction grill system used for their table cooking. Various cuts of beef or pork ($17.95-$22.95 per order) are on offer, and require a minimum of two servings purchased per order, as is standard back in the ROK (Republic of Korea). They come with a cute lunchroom style metal tray with raw garlic, housemade samjang (soybean paste) and wasabi marinated onions, lettuce wraps, as well as a plentiful array of banchan (side dishes). If you’d like rice or a soup on the side, toss an extra toonie onto the bill.

Table cooking combos will mix several types of proteins and cuts, and are priced per couple. The mix BBQ combo ($41.95 for two) includes pork belly, garlic pork and korean style beef. Hungry diners will likely want to add a side order of tteok bokki “spicy rice cakes” ($7.95) which can be pimped out with proteins like chicken, fishcakes and seafood, various types of noodles, or cheese for an added $2.95.