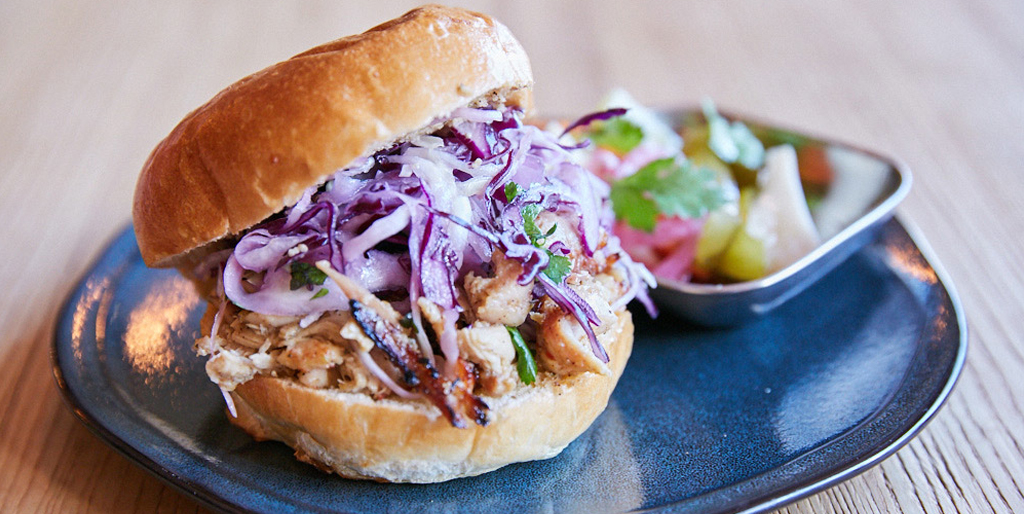 After setting up shop in Calgary and adding Lena to the group, O & B has been on an expansion tear over the last twelve months. They handle the food side of the operation and the downstairs restaurant at Liberty Commons.

In tune with the western side of the neighbourhood, the space is inside a heritage building, which until 2012 was the home for Artscape Liberty Village.

The basement brewery in Liberty Village is Big Rock’s second in Ontario (they’re originally from Calgary) after their production-scale facility in Etobicoke. “All of our beer sold in Ontario is brewed in Etobicoke,” Suzanne Fox, Big Rock’s Communications Manager says.

Downtown, brewer Dan Ellis will get to experiment with the smaller system, while head Ontario brewer Connor K. Patrick handles the mainstays like Warthog English-Style Mild and Traditional Ale in Etobicoke. Size-wise Liberty Commons has a three-vessel, five-barrel capacity system while Etobicoke is six-times the size.

The Big Rock Beer Shop upstairs will pour samples from their eight taps (plus eight more growler fill stations) into 12-oz. glasses. For retail options, they have tall cans, bottles in sixes and twelves, plus 32-oz and 64-oz growlers. The kitchen has put together a special snack menu for the tasting bar.

“I was in advertising,” Dan Ellis says about the jump into his first professional brewing gig, "but I had been homebrewing for years and I have a food science background, so this was something I was always passionate about.”

So far, he’s put out a wide range of experimental nano brews to go with the Big Rock mainstays — everything from a Plum Porter to a recently brewed session IPA.

Despite the variety of styles, Ontario brewmaster Connor Patrick says they’re firmly committed to varying their process to fit the style requirements. “If we ever did a kolsch or a lager down here,” he says, "we’d have to move it to cold storage and we have the capacity to do that,”

Chef du cuisine Ryan Lister has applied his British accent to roughly half of the menu and created (lightly) updated versions of recognizable favourites like fish ’n’ chips, Scotch eggs, and cottage pie — different from shepherd’s pie because it is made with beef, not lamb — anchored by a roasted marrow bone.

Smoke unifies the parts of the menu, including options like Bespoke Butchers pork sausage ($15) and jerk chicken (half $19, whole $37), that aren’t gastropub in nature.  There is also a large-format section of the menu with dishes like Moby Dick fish ’n’ chips for 2-3 ($75) that are meant for sharing.

Naturally, a brewpub-restaurant combination in Liberty Village has to have weekend brunch and Liberty Commons has an extensive menu for their morning offerings on both Saturday and Sunday.