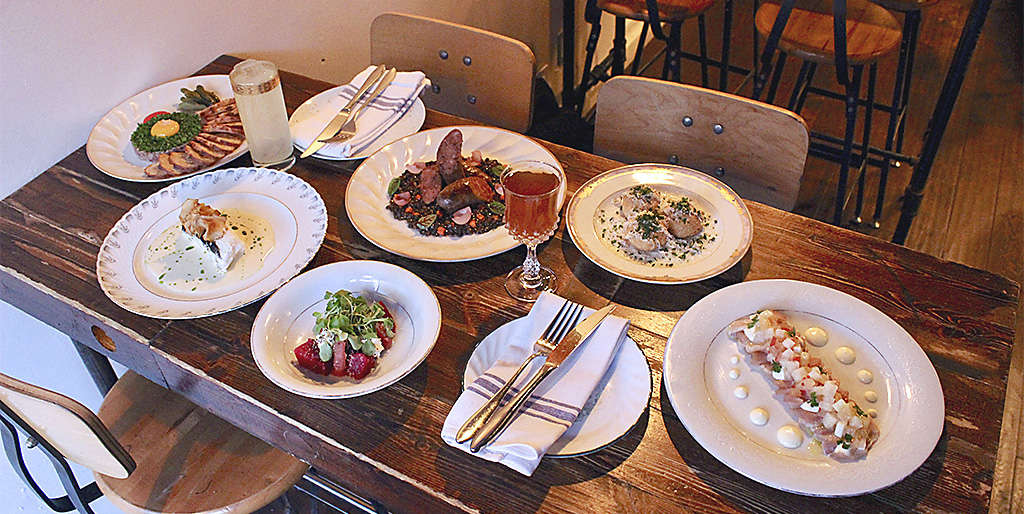 When news broke of a fire at Chantecler in November 2019, people across Toronto were devastated. One of the most beloved destinations for flawlessly executed yet accessible French cuisine would be forced to close. Staff went off in search of new employment, and renovations were planned.

Two months later, chef Peter Robson got a call from owner Jacob Wharton-Shukster with a proposal for a new pop-up. Le Phénix would emerge from the ashes as a temporary outpost in Parkdale. The new project would honour old favourites while giving the team space to experiment with new seasonal dishes.

“It was a no-brainer to come back,” chef Robson reflects. “This place is like a close-knit family. We all love each other, respect each other, and hang out on our days off. There were months in there where people had to find new work, and still almost everyone came back and put in a solid effort with whatever time they had. That’s why this happened.”

Le Phénix had their soft open on Jan. 17 and regulars flooded in. Since then, Robson has launched several new seasonal dishes that have become so popular they may have to move back across the street when Chantecler is set to open again in late summer. The cheese puffs ($2/p) are an old favourite, referred to by many names including “cheese timbits,” “cheese bombs,” and one of Robson’s favourites: “cheese-ception.” These decadent bites are made of cheese pastry stuffed with truffle-cheese sauce and topped with (more) cheese. The dish is finished with lemon-parsley and shaved comté. The roasted beetroot ($11) at Le Phénix is a new side dish with an in-house fromage blanc, grapefruit, orange, horseradish, and puffed amaranth. The steak tartare ($15) is a longstanding winner with tender and flavourful cuts served with a generous topping of scallions, hen egg yolk, and a swirl of toasts for serving. The tuna confit ($16) serves semi-cooked wild pacific albacore tuna alongside dollops of preserved lemon aioli and is topped with cuts of honey crisp apple, kohlrabi, and a sprinkle of pickled chili. The Boucherie sausage and lentils ($15) is a triumph with Ontario lamb merguez atop a bed of lentils and crackling (crisp pork skin), and is finished with a thyme gastrique, pickled pearl onions, and red veined sorrel. Eventually, chef Robson will swap out this and other wintry delights with some new spring creations. The poached halibut ($24 oz. $40 8oz.) is served in a smoked lemon beurre-blanc, and Robson coats half of the cut in a leek ash for a charred taste and crunchy texture. The dish is topped with sunchoke chips and a drizzle of herb oil.

Mixologist Marta Ess created new cocktails for the temporary restaurant and is using the space to experiment with a list that’s completely garnish-free.

“It’s not an imperative goal,” explains Ess as she rinses, shakes, pours, and mists. “But I do think it’s a cool idea to play with the aroma, the glassware, and other techniques to make the cocktails shine rather than anything sitting on the rim that’s tossed aside.”

The On Road is a classic hard-hitting cocktail with a combination of bonal, pommeau de Normandie, Ontario barrel-aged gin, a PEI chardonnay, and cardamom bitters.

Formerly the Indian snack bar IST Eatery, the Queen West location is directly across the street from Chantecler. The long corridor begins with small tables on one side and a bar on the other, eventually opening up to bigger tables and one low open-facing booth for larger groups. Exposed brick walls and crates of records bring an unassuming yet chic vibe to the warm dimly lit space. While Chantecler sat 20-32, Le Phénix can accommodate 48. There’s no doubt that Torontonians would have patiently waited for Chantecler to reopen no matter how long renovations took, but the team is making impressive use of the culinary doors Le Phénix opens. “This has all been such a wild adventure,” muses chef Robson, “and we are not even done yet. In like a month or two, we’re going to start running butchery and cooking classes that end in a sit-down dinner with a wine pairing. Honestly? I can’t wait.”