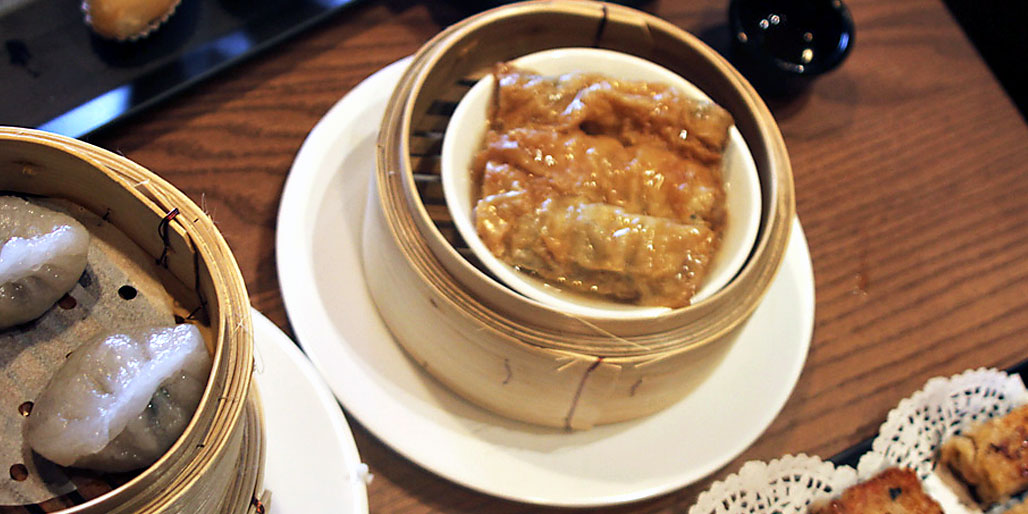 The focus here is sharper than at Yonge and St. Clair — "dim sum all day, even at nighttime," Lui explains. That compares to the menu (and kitchen crew) at the midtown Kwan that switches in late afternoon to larger dishes like Hong Kong style Peking duck and e-fu noodles with crab. The peanuts inside these traditional steamed dumplings contrast nicely with the chicken filling. (IMAGE: DAVID ORT)

Classics and innovative dishes are represented across the menu’s five categories: steamed, pan & deep-fried, served in a steamed rice flour noodle wrap, congees and desserts. Prices range from $3.00 for small options to $6 for the extra-large items. "Give me time," Lui says of the evolving menu, "I need to make sure that the chef and I are on the same page."

Feedback from early customers has inspired her to add more vegetarian dishes, duck dumplings and chicken siu mai to the list of options at Kwan North York. The smaller number of seats, she says, makes it easier to react to feedback and for the kitchen team (veterans of Royal Teahouse in Markham that she also owns) to prepare all of the dim sum in small batches. The football-shaped dumplings have a shattering exterior to go with their filling of dried shrimp. (IMAGE: DAVID ORT)

The front door opens directly into a single, large rectangular room with seating for about 70 diners. Lui wanted to create a calm, Zen-like experience for the space, which had been a RadioShack in a past life. She counts herself lucky to have found a designer who understood that vision. They used large wooden baffles and sound-dampening wall coverings to create a decor that Lui likens to the setting for the fight scene in Crouching Tiger Hidden Dragon. Squid tentacles with sea salt is one of the non-dumpling options at Kwan. (IMAGE: DAVID ORT)