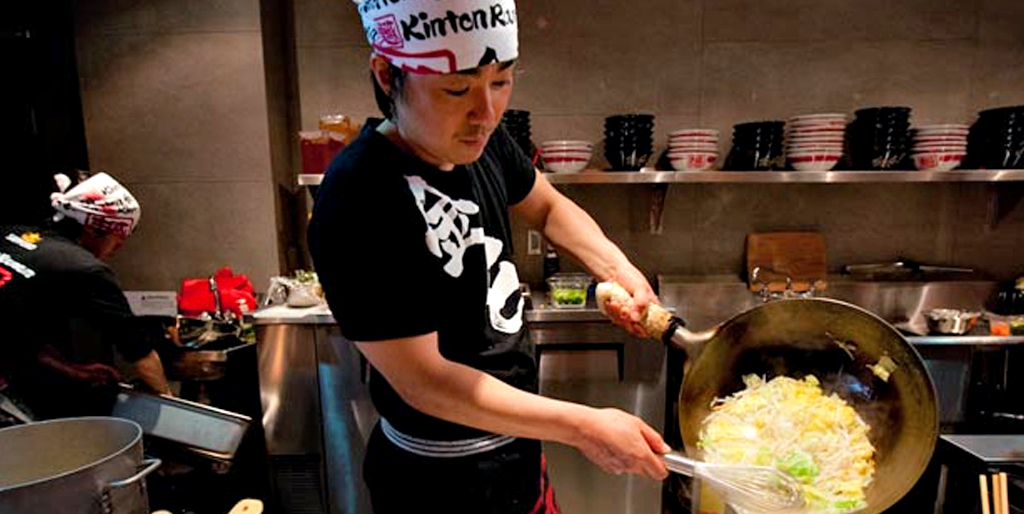 When it comes to ramen in Toronto, choices have been scant compared to the bounty of New York City, with its IPPUDO and Totto Ramen, or even Vancouver, with its Kintaro Ramen Noodle or Motomachi Shokudo. But now Toronto has a new player on the ramen scene: Kinton Ramen, opened last week in Baldwin Village, which aims to do away with the misconception of ramen as instant food that hails from plastic packages.

Behind Kinton Ramen are the same folks who run Toronto’s ever-popular Guu, along with chef Nobuaki “Aki” Urata, who began making and selling ramen at the age of 19 from a street food cart in Kobe, Japan. When Aki moved to Canada, he worked at Toronto’s NAMI Restaurant for several years before going to Vancouver to cook ramen, returning to Toronto only recently to help open Kinton.

A take on a traditional ramen bar, Kinton — which means “golden pig” — offers just 38 seats, most of which are bar style. Designed by Bennett Lo of Dialogue 38 (Guu, Spring Rolls), the space is warm with wood throughout, including the beveled walls, each piece of which was painstakingly cut and placed by hand. As one might expect, the space is dotted with golden pigs (even the bathroom).

Keeping in tune with the pig theme, the ramen broth is mainly made from pork bone (with some chicken and fish stock) and is simmered for at least 18 hours. Guests choose their type of ramen by the tare or “flavour essence” placed at the bottom of each bowl: there’s miso ($9.50) for a milder flavour, shoyu ($9.50) for a soy taste and shio for a saltier flavour ($9.50). There’s also a spicy garlic option ($9.80) and, unique to Aki’s menu, cheese ramen, made from miso tare with shaved Swiss cheese on top ($10.80).