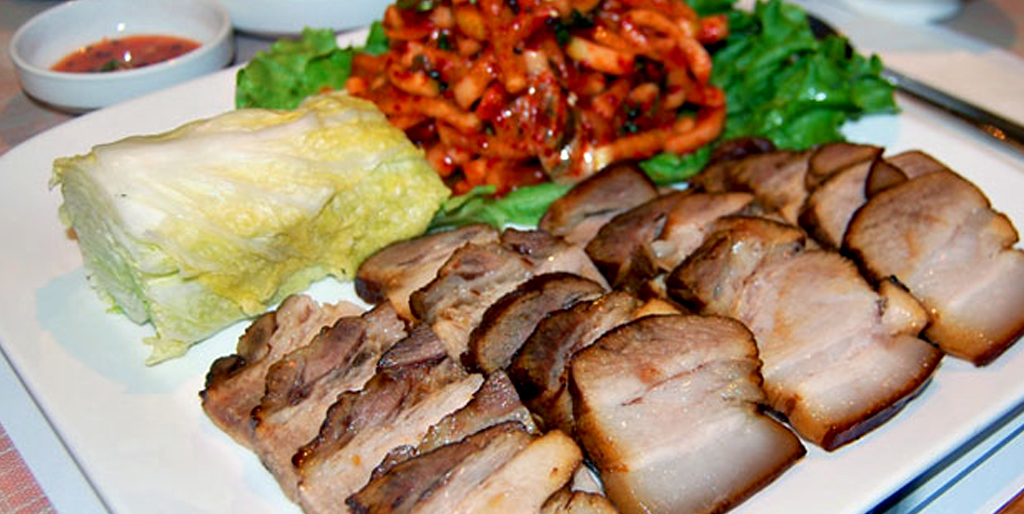 There’s a newbie in North York’s Koreatown strip: Kayagum. Situated in the space previously occupied by The Party Restaurant at Yonge and Finch, it sticks out among the plethora of other Korean options we have in this town, not least because starting next week it plans to stay open 24 hours a day.

Won Choi, the English-speaking waiter on hand when we dropped in, tells us Kayagum is the name of a traditional Korean stringed instrument. Choi says that owner Howard Kim chose to name his restaurant after the instrument because, “In Korea, there are three things we enjoy in life: music, food and shopping. At Kayagum, you can do two of three.”

Proving his point, Choi says Kayagum has live jazz music on Saturday nights, and they are looking into getting live Korean-jazz fusion music as well. Call it another detail that makes Kayagum slightly more special.

Kayagum makes its noodles, appetizers and kimchi in house. Choi points to the popular cold noodle soups made from buckwheat noodles — such as the bibim naeng myeon with spicy sauce ($9.95) — which offer satisfying refreshment on a hot day.

But when we visited, the weather chose to be brisk, so Choi showed us another popular dish on the menu, the beef dolsot bibimbap ($8.95), which comes in the traditional Korean hot pot, sizzling on the table, with rice and vegetables. “Pork belly is greasy. After we boil it, it becomes less so,” Choi tells us. “We boil it in a huge pot, with assorted herbs, including traditional herbs used in medicine. It’s considered a healthy meal.”

Separated by a language barrier, we couldn’t speak to owner Howard Kim directly, but Choi says all the décor is handmade, and many of the staff, including him, worked on the interior. The entrance and roof tiling are inspired by traditional Korean homes, while the spacious tables — large enough for a group of four to sit comfortably — pay homage to the contemporary. It’s part of Kim’s desire to create a restaurant for Torontonians of many types.

For now, Kim is focusing on the immediate neighbourhood. We asked him, through Choi, about his decision to go 24 hours.

“People in the surrounding area, their lifestyle, they are younger generations,” Choi translates. “The people who live in the area, they really seek this out.”