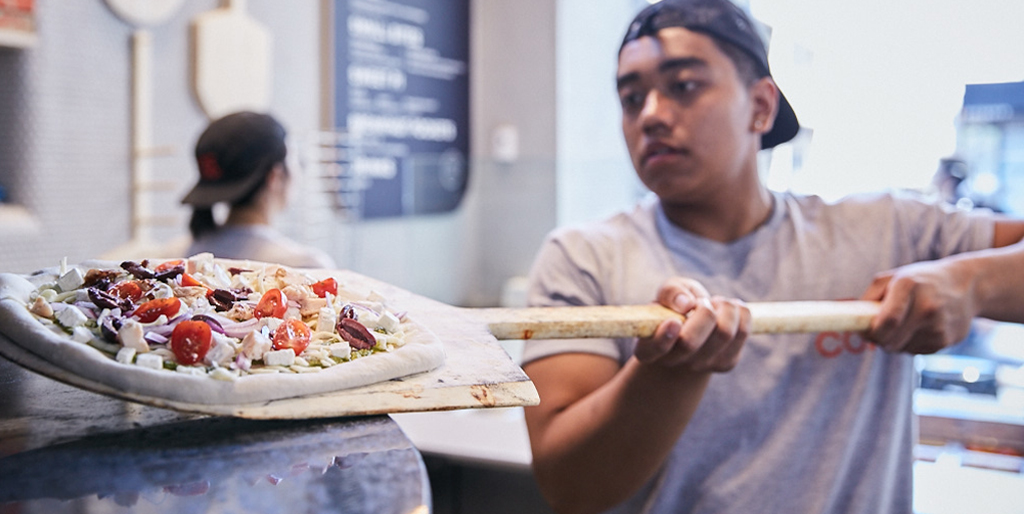 When he travels for work or pleasure, Pi Co.'s Marc Askenasi makes a point to try a steak, a cheeseburger and a Margherita pizza in every city he visits. From this standard comparison, he can establish a baseline opinion about each town’s restaurant scene.

He has noticed — especially on a recent trip to Arizona — how well the make-your-own, quick-service pizzeria model works and decided to bring it to Toronto by opening Pi Co. earlier this spring.

To execute his plan, a feat in an already fairly pizza-saturated Toronto, he brought master pizzaiolo Giulio Adriani on to train his staff on how to use the Marra Forno oven. After about two minutes in a 1000°F degree oven, it’s no surprise that pizza come out steaming-hot  (IMAGE: IGOR YU)

Adriani helped develop a dough recipe that, along with the double fermentation, helps create what Askenasi calls “a very thin, fine layer of crispiness at the bottom so it doesn’t become a messy soup when you walk out with it."

Even though it’s powered by electricity, Askenasi says the oven is capable of reaching the 1000°F mark you would expect for wood- or gas-fired options and that means they can cook pizzas in between 60 and 90 seconds. With the option to craft their own recipe, diners can go as veg friendly as they want (IMAGE: IGOR YU)

As far as the make-your-own aspect is concerned, put aside images of a Cosmo Kramer-style operation — the staff at Pi Co. do all the hard work. But customers do pick everything from the sauce (traditional Italian, North American or oddball options like pesto and bbq), to one of seven or eight cheeses and unlimited number of toppings that range from conventional items like pepperoni or sun-dried tomatoes to more unusual offerings like broccoli and shaved asparagus. To complement the two pizza options (Margherita is $9 and the design-your-own is $13), Pi Co. also sells salads ($7 side or $12 main). Here again, diners are given the control and choose what greens they want, plus two proteins (or cheese) and an unlimited number of other toppings.

Once his branding was set, Askenasi hired Toronto-based MSDS Studio to design the space. “Instead of creating an Italian-inspired environment or a traditional pizzeria environment,” he says, "we have a higher-end, boutique, modern feel in a quick-service format."

If all goes according to plan, Pi Co. will continue to open locations across the city in larger spaces that allow room to add ice cream, beer and wine to the menu. (For now, they do folded dessert pies at the flagship restaurant.) While they wait to expand, UberEats and Foodora are acting as delivery partners.

Instead, Pi Co.’s will use a specially important flour that has been de-glutenized rather than a product based on corn flour.