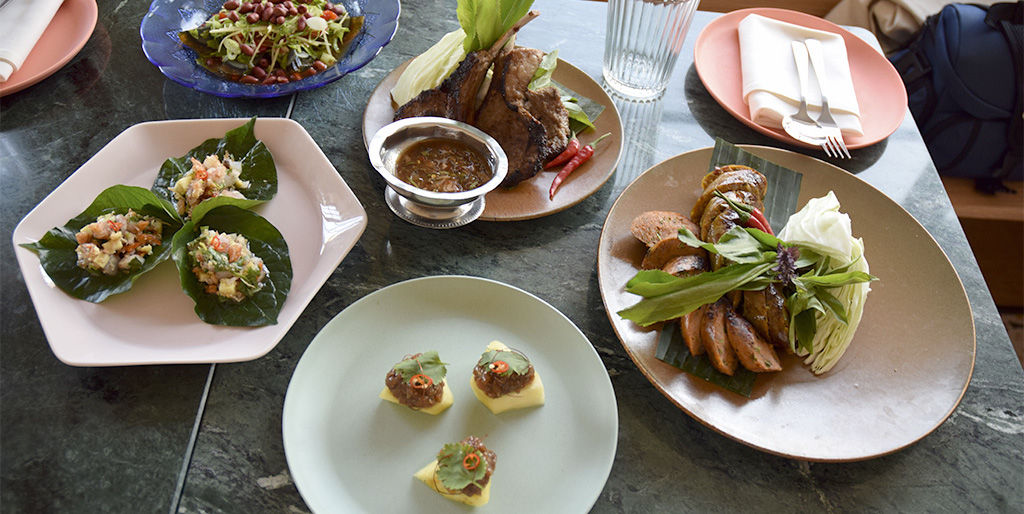 At first glance Favorites Thai BBQ doesn’t look outwardly Thai, in fact it’s the exact opposite. The light and airy space nods towards an influence of Spanish revival with its rounded passageways and clam pastel hues. The serenity is met with a 70’s inspired terrazzo floor and hippie beads that double as a back-room doorway, adding some extra pizazz to Jonathan Poon’s ultra-hip new spot.

After opening Paris Paris, Bar Fancy and Superpoint, Poon was inspired to open a Thai BBQ spot after his Garden Garden event last summer. The backyard wine party served natural wines and Thai BBQ in a secret courtyard across from Paris Paris on Dundas West. After the success of the event, the conceptualization of Favorites was born. Then came Chinese-Romanian chef Haan Palcu-Chang’s (previously the chef at SoSo Food Club) vision for a Thai menu that was a little less traditional than most. “I wanted to bring in flavours that you can’t find at other Thai spots in the city. The food there is usually extremely sweet,” says Haan, referring to the slew of menus peppered with the likes of green, red and yellow curry. “With Favorites I wanted to reintroduce Thai bbq, something that’s more prevalent in Thailand, but still keep it modern with the preparations,” he adds. Now, after months on the drawing board and a little help from his friend Monte Wan of Khao San Road, Jonathan Poon was able to bring chef Haan’s vision to life.

Favorites is tucked away at either entrance from the always happening Ossington Avenue. The street side entrance ushers people into Sam James Coffee Bar; a fully operating coffee shop by day, turned Favorites holding room by night. If you peek around the corner into the unnamed graffitied ally next door, you’ll find colourful murals leading you towards a set of glass windows. True to Jonathan Poon’s eclectic style, rows of wine bottles are exposed through the glass and line the back of the restaurant's cedar booths.

When creating the space Poon and Jesse Fader drew influence from their trip to LA last year. “There were more Thai spots than Chinese restaurants,” Poon laughed while explaining the massive Thai population and influence he saw while in LA. Favorites Thai BBQ was designed to look like a retro, yet clean space where “It wouldn’t look out of place to serve pasta or duck confit” says Poon.

The Betel Leaf snack arrives in a trio of one-bite wonders. Chef Haan says this dish, like many others on the menu, are a nod to the vibrant street food culture that exists all over Thailand. Atop the small green leaf sits a mixture of dried ship, ginger and peanuts all dressed in a tamarind and palm sugar emulsion. This burst of freshness accompanied by a bitey finish, invigorates the palate and is the perfect dose of flavour to intrigue the guest and keep them wanting more.

Next comes the pineapple bite. These delicate snacks really showcase the skill and attention to detail taken by chef Haan. Atop a small bite-sized piece of pineapple is a mixture of caramelized pork and chicken that has been cooked down in cane sugar with shallots and fried garlic. The amuse-bouche is perfectly balanced with nuanced heat and a hint of sweetness.

The grilled lamb chop is the perfect dish for those not bold enough to expand their culinary horizons. Perfectly grilled on one of their three charcoal barbecues, this simple dish is elevated with a traditional nam jim jao, a Thai dipping sauce made with soy, lemongrass and garlic. The three chops are plated with an assortment of herbs. “They are meant to be a palate cleanser, not just a garnish” says Poon of the classic addition to most Thai bbq dishes.

The sausage combo hits the mark for guests looking for those classic Thai flavours, except  instead of delivering them in a curry, or a medley of veggies and rice noodles, chef Haan plays on classic Thai sausages. Both made in house, the red curry duck sausage may be less traditional, but takes on the flavour of the curry you might be missing. Where as the Sai Oua or Northern Thai pork sausage is made true to the Thai style.

Like all of Jonathan Poon’s restaurants in Toronto, Favorites is a place where you’re encouraged to sit back and enjoy the company and the atmosphere, just as much as the food. “This is a full-package restaurant, we have a strong wine list that goes especially well with the food and we want our guests to feel comfortable diving in and getting the full experience,” says Poon of their wine list curated by Krysta Oben of Grape Witches.

With Favorites just in the first stages, we can expect to see a lot more coming from this team of experienced restaurateurs. This space has the potential to build something really special; with events in the holding space and the capacity for outdoor expansion, this is just the beginning for Favorites Thai BBQ.