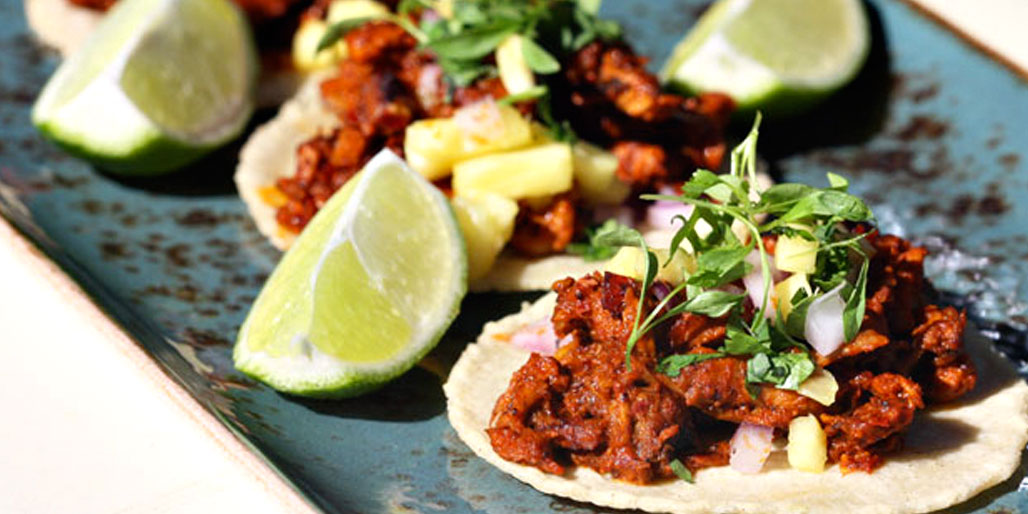 Toronto’s summer romance with Mexican cuisine continues with the grand, and we do mean grand, opening of El Catrin Destileria. The Distillery District’s newest addition, designed by Munge Leung, is a visual feast. Both inside and out, this modern cantina — which used to be The Boiler House — is decked out with eye-tantalizing details, many of which have been imported straight from Mexico.

The 5,000-square-foot patio is decked out with vibrant colours (yellows, fucsias, aquas) and is anchored with an open fire pit that roars both day and night. Custom metal screens inspired by Mexican paper art depict dancing skeletons, while mammoth laser-cut lampshades hang overhead. There’s also a fully equipped outdoor bar that ensures your tequila-based cocktail arrives faster than you can say “¡viva México!” (There are a total of 120 tequilas and mescals on offer.)

The cathedralesque interior of El Catrin (the ceilings are 22 feet high) is brightened by a two-story mural, painted by Mexican native Oscar Flores. The mural is a visual cacophony of Mexican imagery: Día de Muertos skulls, ancient gods, serpents and more.

The chef, Olivier Le Calvez, hails from Mexico City. He arrived a few weeks ago with his wife and young son in tow. He was head chef at the new luxury hotel Live Aqua Bosques before he was swooped up by restaurateurs Mathew Rosenblatt and John Berman (who also owned The Boiler House). In the process of recruiting him, Rosenblatt and Berman went to Le Calvez’s home in what was supposed to be a one-hour tasting, but they ended up spending the entire night drinking mescal and noshing on Le Calvez’s French-executed contemporary Mexican cuisine.

Southern Mexican dishes from Oaxaca and Yucatan (there are six different ceviches on offer) dominate Le Calvez’s modern tapas-style menu. Le Calvez recommends that people order about four to five dishes, for sharing of course. To showcase freshness, Le Calvez has orchestrated tableside guacamole preparation. His French training manifests itself in his braising techniques as well as in a few of the dishes (there’s a foie gras and poblano pepper tostada, $9).

Almost everything is made in house, including the corn tortillas and the mole, and brunch and lunch services are slated to start in the next few weeks.