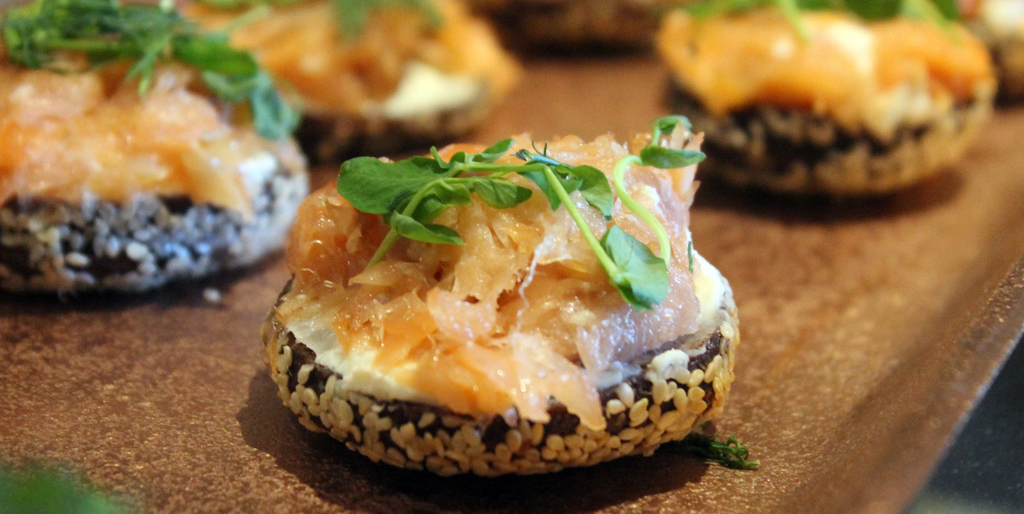 The Drake has gone and done it again. Remember when the original Drake Hotel first stepped out on West Queen West, breathing a gigantic culture-y breath into the once-shabby strip? Hard to imagine but true. Well now cometh the Drake Commissary to the Junction Triangle, an up-and-comer of a ‘hood that’s drawing buckets of cool cats thanks to art galleries, breweries and the incoming Museum of Contemporary Art.

Setting up shop in a former condiment factory on Sterling Road, the new 8,000 square foot Commissary is quite the multi-hyphenate, being both bakery and bar, take-out joint and restaurant, theatre of food and cafe all at once. The space is marked by a giant sign and a 40-seater outdoor patio. Inside, a photo booth sits next to the entrance (a staple of the properties), making way for a lengthy marble display counter loaded with foods both baked and prepped. Frequent Drake collaborator John Tong of +tongtong is responsible for the design of the room, which ebbs and flows from a rec room nook fit with mid-century furniture to more cafeteria style seating arrangements, seating about 140 in total. Local digital artist Alex McLeod was commissioned to do a giant mural — a magical landscape that skips from city skylines over to emerald green mountains. Other works of art will rotate in and out of the space.

At the far end of the room lies the kitchen. Visible through a glass wall, it invites patrons to ogle the chefs as they go about their daily duties. Exec chef Ted Corrado oversees the diverse food elements of the growing Drake empire, while Jonas Grupiljonas manages the Commissary kitchen. Food offerings reach from morning to night, ensuring that patrons can get both their coffee and cocktail fixes. Sunrise picks include breakfast sammies, lox-loaded bagels and plenty of baked goods like blueberry scones and almond croissants. All that bread-y goodness? It’s all baked in house throughout the day. For the rest of the day’s length, current offerings from the seasonal menu include sandwiches — think duck confit with sour cherry, caramelized onion and arugula on a milk bun — miso cauliflower brought in from Prince Edward County and rotisserie jerk chicken. Oh, and there are plenty of goodies for those with a sweet tooth. Banana cream pie with salted caramel and dark chocolate, anyone? The Commissary is also the new home base for the Drake’s catering arm. Drake CEO and founder Jeff Stober noted that the whole project took about a year and a half to get up and running from start to now, which is pretty swift for such an expansive space. As of next Monday, June 12, get ready for Sterling Road to be the city’s new cultural hub and hotspot.