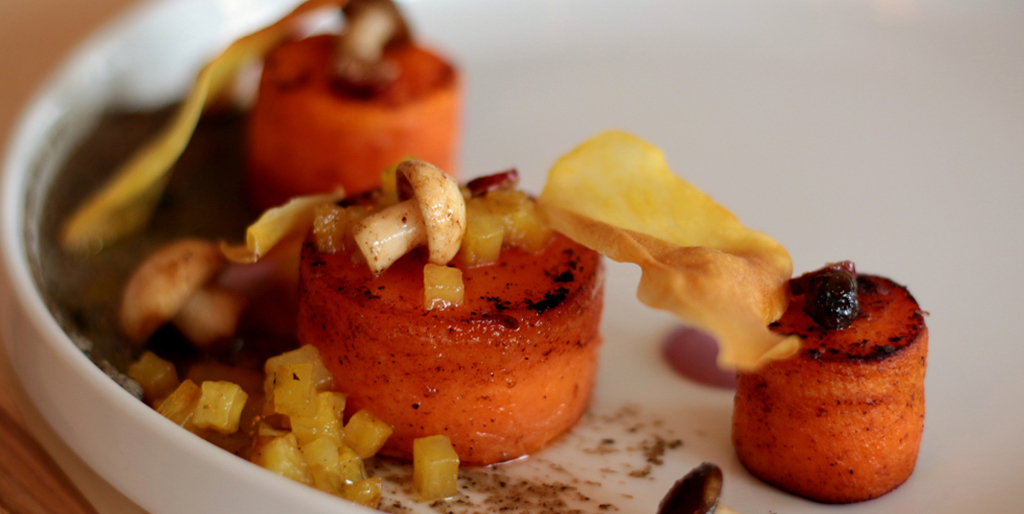 Chef Paul Kim has quietly opened his French-inspired Korean restaurant in a space on Clinton Street, which was formerly the home of Acadia, Red Sauce and Backwoods Smokehouse, respectively.  Doma, the restaurant’s name, is Korean for cutting board.

When asked about the inspiration behind the name Kim states “all food starts from cutting and it’s simple to pronounce.” Kim hopes to recreate Korean flavours using local ingredients. For instance, he goes to the fish market every day to source fish for his seafood dish ($24). It lists scallop, fish, prawn and clams as its primary ingredients and is his riff on a traditional French Bouillabaisse with the addition of kimchi pan-fried gnocchi for added texture. The proteins are butter poached at 60°C before a ladle of velouté is added to the bowl. It is made from a combination of fish and dashi clam stock, butter and cream.

Kim studied at the Cordon Bleu in Ottawa and has worked seasonal jobs at golf clubs, including Ballantrae and Summit, which allowed him to stage at places like Buca and Nota Bene to hone his craft. He briefly owned a catering company, mostly stemming from demand from friends and family to cook for them.

When asked what he was trying to do at Doma, he cites Benu’s Corey Lee as his inspiration. Indeed the way the menu is laid out where dishes do not have names, but instead are described by their ingredients is similar to Lee’s style of menu. The beet dish ($12) appears in uniformly diced cubes, almost tartare-like, topped with a gochujang ‘snow’ (chili oil that’s been turned into a powder via molecular gastronomy) and Korean pear.  The silky powder goes through a reverse transformation once it hits the tongue and turns back into its liquid state.

Continuing on the vegetable spectrum is a trio of yams ($14) made with a purple yam foam, Asian yam chips and a candied yellow sweet potato. This dish is a playful combination of textures as they appear in a pan-fried, chip and mousse format. It also has a melange of Portobello, shiitake, oyster and trumpet mushrooms, as well as a smidge of truffle oil.

Those looking for meatier options can sink their teeth into a pork jowl ($22) which is marinated in a doenjang (bean paste) marinade for 24 hours before undergoing a 6-7 hour sous-vide process. The dish is served with a side of heirloom carrots, fingerling potato and lotus root chips.

The ingredient “perilla” is in several of Kim’s creations, and even on the cocktail list. It is an herb from the mint family that is very commonly used in Korean cooking. The cocktail list was created by Drinksmith’s Danielle Yoon and has updated versions of classic cocktails all ringing in at $13.

The New-Old Style, for example, is Yoon’s take on an Old Fashioned and the Next Generation is an Asian-inspired mojito, subbing perilla leaves for mint.

The wine list is a curated selection of both local and imported offerings with about four options of both red and white available by the glass.

Desserts will definitely seem foreign to most but if you give into your adventurous side you may be pleasantly surprised. The Mugwort Ice Cream sounds like something out of Harry Potter movie, and is made from a species of fragrant plant.  The end product has the hue of eucalyptus but the flavor is subtle. It is served with a dehydrated red bean sponge cake and yuzu curd, the dish, once again showing Kim’s playful love of textures.

The restaurant’s interior is the creation of Jenna Dylan Lee, Kim’s girlfriend, an interior designer who is “obsessed with the Scandinavian look” says Kim while pointing to the tapestry that hangs on the wall as an accent piece.

The menu will change monthly in keeping with the philosophy of creating elevated dishes with local ingredients. A tasting menu is also available for $65 per person.