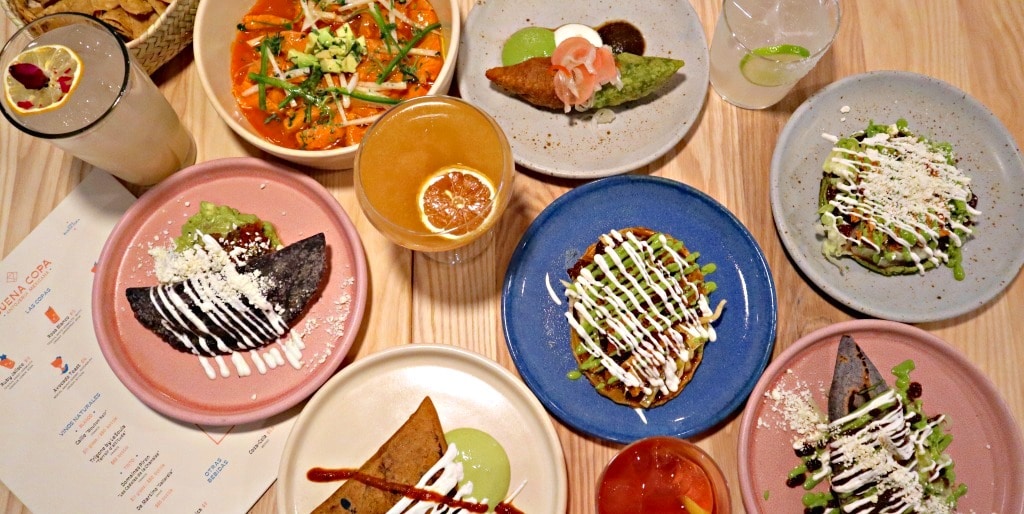 Fans of Campechano are already familiar with its tortillas, which are made from masa, a corn dough that Fisher and Roe painstakingly make in-house using dried corn imported from Mexico. While Campechano is all about tacos made from masa tortillas, Buena Copa introduces Toronto diners to lesser-known Mexican dishes made with masa. The restaurant takes its name from a Mexican term used to describe a person that’s “fun to have a drink with,” a reference to Fisher and Roe’s desire to create a relaxed, convivial space where friends and family can come together for good food and drink.

Fisher and Roe partnered up with former Quetzal chef Alexandra Rivera to create a menu of antojitos – snacks made with masa that are a typical sight in markets throughout Mexico. To make their masa, Fisher and Roe source dry, single-origin, non-GMO corn from farmers in Oaxaca, Mexico. Every day, they cook the corn and then grind it into a masa dough. “The idea was that people in Toronto are pretty familiar with tacos now, so we want to introduce them to some of the other ways that masa gets enjoyed in Mexico,” says Fisher. Popular types of antojitos vary throughout different parts of Mexico. Fisher and Roe aim to change up Buena Copa’s menu regularly to reflect this regional diversity.

Although certain antojitos like tostadas and quesadillas will likely be more familiar to Toronto diners, Fisher and Roe say that antojitos generally have the same basic components as tacos (masa shell, some type of protein, and salsa) and therefore have an approachable, similar flavour profile. The pleasantly mild ceviche rojo is made with trout and a hint of lime. Cascabel chili gives it a little kick and its red colour. The huarache de chicharron gets its name from its elongated, sandal-like shape (the Spanish word for sandal is huarache). For this dish, the masa is fried and topped with pork belly, salsa borracha and crema. Another dish named for its shape is the tetela de frijol y queso, which sees a masa shell stuffed with beans and fresh cheese. Fiery haberno salsa makes it one of the spicier items on the menu. The tlacoyo de bistec sees the masa formed in a torpedo shaped around a filling of steak, cheese, and salsa borracha. For the infladita de pescado, the masa gets a darker colour from squid ink. It's fried into a shell-like sandwich shape and filled with trout and salsa verde. For the tacos de birria, which is designed to be shared family-style, a mix of brisket, shank and short rib is grilled, braised, and then mixed with chickpeas, various adobos, and onions. It's served with warm tortillas and a trio of guacamole, salsa verde, and salsa de chile tusta.

Well-known Toronto mixologist Robin Goodfellow helped to develop Buena Copa’s bar menu, which focuses on tequila- and mezcal-based cocktails. Fisher says their goal is to offer “balanced, fun cocktails that are good with food.” She adds that they also hope to make mezcal more approachable for imbibers who might previously have been intimidated by the strong Mexican spirit. The rosa blanco is a refreshing and slightly nutty blend of tequila, white vermouth, orgeat, grapefruit, and soda. The Buena Copa old fashioned is a Mexican riff on the classic cocktail done with mezcal, hibiscus, and mole bitters. Like any good Mexican restaurant, they also do a mean margarita made with tequila, orange liquor, and lime, and a generous splash of salt on the rim.

The drinks menu also includes a small selection of natural wines. There are a few classic Mexican beers available on draft and by the bottle, plus a local brew from Blood Brothers. For $3, you can make any beer a michelada, a jacked-up beer with added lime juice, tomato juice, chili peppers, and various spicy sauces.

Fisher and Roe worked with designer Truong Ly to create Buena Copa’s cheerful, pink-accented space. One of the most eye-catching elements in the restaurant is the circular-shelved back bar, which Fisher says pays homage to the significant element patterns play in Mexican design. Fisher describes the restaurant as a “grown-up version” of Campechano. “I think the biggest upside that we're excited about here is that we have a full kitchen space and a full bar space. We have space to do way more fun stuff,” she says. The pair wanted the restaurant to be the kind of welcoming space where you’d feel equally comfortable bringing a Friday night date as you would rolling in on a Tuesday night wearing sweatpants. Fisher says they want Buena Copa to offer “a bit of sophistication but still feel fun and casual.” The light, pretty space is designed to transition well from day-to-night — a good thing, since Fisher and Roe say a brunch menu is in the works.