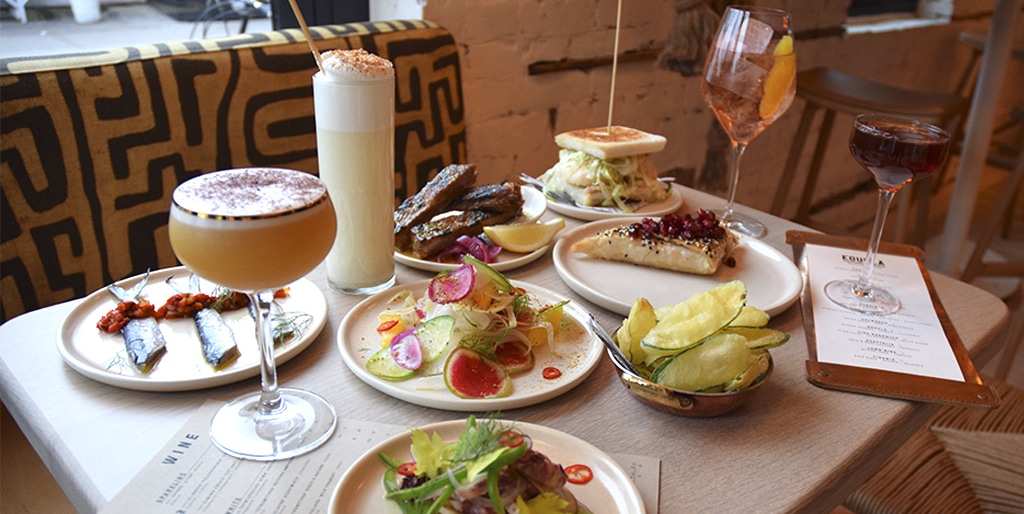 Bar Koukla is the newest member of the Mamakas Food Group and the most recent resto to take its place on the Ossington strip.

In 2015 Thanos Tripi opened Mamakas Taverna and took the west end by storm with his unique collection of Greek wines, traditional yet elevated Greek fare and chic Mediterranean atmosphere. Bar Koukla is the third iteration of Tripi’s love for the Greek lifestyle after Mamakas and Agora Greek Market. Modelled after an Athenian or mezedopoleion or meze bar, Bar Koukla is a place to sit, snack and sip. With a collection of 15 meze — or small — plates and a list of 25 unique Greek wines by the glass, this bar emulates the laid back casual attitude that you would find on the coast of the Mediterranean. “The food at Bar Koukla is a collection of all of my favourite meze plates,” says Tripi. Inspired by his childhood summers in Greece and his many travels back since, Tripi wanted Koukla to emulate the spirit of Greece and their ultra casual way of dining. While developing Koukla, Tripi was dedicated to elevating the dishes from something that's familiar, to plates that were really going to blow his guests away. Tripi also wanted to make sure he celebrated the flavours of the Aegean Sea with his new spot.

"There isn't a raw bar at Mamakas, so I wanted to make sure we had one here," says Tripi. The raw bar features an assortment of seasonal imports from the Aegean, including oysters, lobster, fresh scallops, razor clams and sea urchin. “Its very much a cultural identity of Greece to gather around food," says Tripi. The salata ($13) is an extremely refreshing and light dish. Described as somewhat of a palate cleanser this dish is made up of assorted radishes, fennel, citrus and bird's eye chili. Lamb ribs ($15) are so succulent they barely stay on the bone. The ribs are marinated in a mixture of Greek spices and served with lemon, pickled onion and Mamakas Taverna's famous tzatziki. This decadent dish might as well be dessert. A large chunk of Greek feta is wrapped in a light and flaky phyllo pastry and brushed with honey. Once the dish is baked it's topped with black and white sesame and fresh pomegranate ($10). Similar in style to a traditional spanakopita, this dish leaves out the spinach and focusses on the savoury quality of the salty sheep's milk cheese, while complementing it with sweet and sour elements. The sardines ($13) are an extremely simple dish composed of three marinated sardines and florina peppers, topped with fennel leaves for garnish.

The wine program at Bar Koukla is a show-stopping list of 20 to 25 biodynamic, organic and natural Greek wines, hand selected by Tripi and his team. They have imported an eclectic list of Greek bottles to try and created an approachable way for Torontonians to get to know different Greek grape varietals. The restaurant also has an extremely balanced cocktail program designed by their mixologist and manager Scott Langely. The cocktail list infuses Greek spirits like Mastika, a mastic seasoned liqueur, Tsipouro, Rakmelo and Tentura. Every cocktail on the least has a minimum of 2 oz. and is priced at a reasonable $14. The Aegean spritz ($14) is Bar Koukla's take on the classic Italian cocktail the Aperol spritz. Made with an Aegean citrus bitter, sparkling wine and topped with edible flowers and a lemon peel, this might be the most refreshing of Koukla's cocktails. The fig jus ($14) is made primarily with Metaxa, an amber Greek spirit made from Muscat wines, wine distillates and Mediterranean botanicals. The cocktail is balanced with burnt fig, walnut and verjus, the juice of unripened grapes. The Katsiki fizz ($14) is not your average cocktail. Made with goat's milk, bergamot, Tsipouro and topped with soda, this fizzy drink is rich in flavour while still quenching your thirst. The sumac sour ($14) is made with blood orange, Metaxa, sumac and egg whites and is shaken to give it a creamy and light mouthfeel.

Bar Koukla was inspired by the warm, coastal vibe of Greece. The Grecian influence is present in all of Tripi's locations, but Koukla really emulates the island lifestyle. Bringing back ideas from his trips to Mykonos and Ios, the space is modelled after the Mediterranean and oceanic atmosphere. This is further accentuated by the use of nautical ropes, foliage and the standout Terrazzo bar. The rose gold lighting and brass accents add to the warmth of the space, making it feel as if you’ve drifted away to somewhere sunny even in the midst of winter. The windows illuminate the space and when the sun is shining, light bounces throughout the room adding to the island vibe. By: Nicole Richie, Published on: Dec. 5