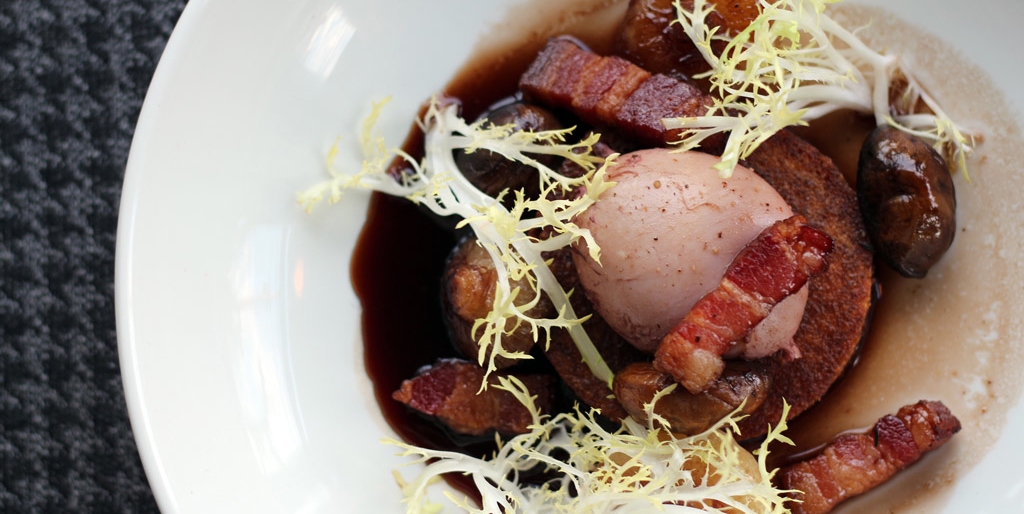 Luke Donato, executive chef and co-owner of Bacchanal, is no stranger to fine dining.  He graduated from the French Culinary Institute in New York City and worked in some of Toronto’s finest restaurants such as North 44, Ortolan and later as sous chef at Campagnolo.

“By the time I was in my early 20s I wanted to take cooking seriously and in 2010 I looked up all the restaurants on enRoute Magazine’s Best Restaurants list and staged through all of them,” he explains. Donato's 3,500-square-foot “neo-bistro”  (formerly the home of Recess Diner) seats 100 and has a spacious wraparound bar. “The space is designed for great theatrics — every seat is a great seat,” says Lachlan Dennis, co-owner and general manager.

Ottawa design firm, Iron and Ivory is responsible for creating the modern bistro with leather banquettes and velvet bar seating, along with “jewel tones and brass accents” to create an “elevated yet inviting space.”

The name is a nod to the Roman god Bacchus, the deity of wine, revelry, good times and sometimes, debauchery.  It fits well with Dennis’s focus on the wine program; he is a certified sommelier (ex-Le Séléct Bistro) and has created a list of some 25+ wines available by the glass.  “It’s just juice; it should just be drunk,” he adds about the approachable wine list which is predominantly French.  “It’s either French or interesting.” Jason Griffin (formerly of Maison Boulud Montréal) is responsible for the bar program with a menu of cocktails that “have a link to French culture” by way of people and landmarks.  There’s the Non, Je Ne Regrette Rien (named after Edith Piaf’s famed song), which is a spirit-forward drink made with mescal, elderflower liqueur and ginger bitters, or the Dalí, in homage to the Parisian roots of the surrealist movement.  In keeping with French cuisine’s reputation of “composition and refinement,” Griffin hopes that the cocktails are a reflection of that.

The menu is a list of classics with a modern twist. “It’s fun to pull heartstrings,” says Donato. Typical to French bistros you’ll find items such as steak frites and a raw bar complete with grand plateaus.  Shareable plates open the menu, including the Oeufs Pépin, a nod to the French culinary great who was also the dean at the French Culinary Institute where Donato received his culinary training.  “When kids were watching cartoons, I was watching [Jacques] Pépin on PBS,” says Donato.

There’s a Gallantine de Volaille, foie gras wrapped in chicken skin and topped with pickled chanterelle or the Leeks Vinaigrette topped with a creamy sabayon and fine herbs. The culinary inclination seems to run in Donato’s family; his mother is a trained chef and a graduate of George Brown. “I wasn’t raised on canned tuna casserole,” he says about his childhood.

The menu continues with small plates such as Oeufs en Meurette, a poached egg in a red-wine reduction topped with crispy bits of lardons and frisée.  The agnolotti is adorned with snails and hen-of-the-woods mushrooms with a sauce iodine, a “green sauce” of blanched parsley, watercress, and spinach with confit garlic.

For mains there are classic dishes such as the Magret de Canard with plum, parsnip and foie gras.  On the lighter side of things is a Truite des Fjords, a nod to the Michelin star restaurant, Maison Troisgros with a sauce de l’oseille (sorrel).

And do save room for dessert — after all, that’s one of the other things the French are known for.  Pastry chef Cori Murphy (Alo) is churning out traditional sweets such as the Paris-Brest, a choux pastry filled with hazelnut praline crémeux or the classic Baba Au Rhum, with pineapple, all-spice and white chocolate.

For those who like surprises, let the chef cook you a “carte blanche,” family-style meal with a wine pairing option for a complete evening.  The team aims to “provide an approachable yet educational experience,” likening it to “knowing an industry insider” and entrusting them to create something exclusive and fun.  And, by all appearance, they have the pedigree at Bacchanal to deliver on that promise.