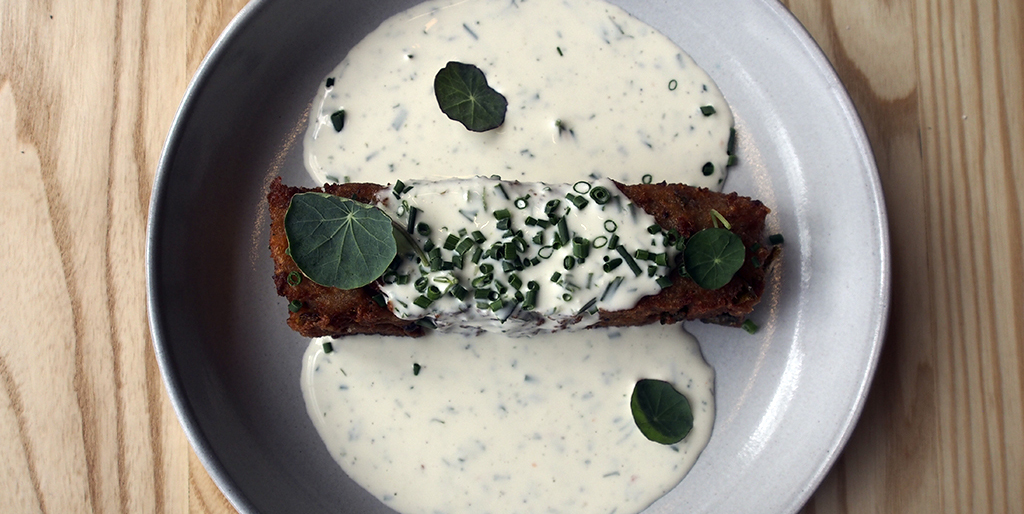 Meighen himself started out as a chef, working at esteemed Canadian restaurants such as Canoe and Joe Beef, before making his way to London where he made the switch to the craft beer scene. After he moved back to Toronto, he wanted to open a restaurant, but it took him some time to settle on the concept.

“I spent a lot of time thinking, does Toronto need another brewpub?” he recalls. Meighen wanted to create a concept that combined his love of food and beer. However, it all came together when he came across the book The Third Plate by Dan Barber, which talks about circular food production, and how the future of food will involve using sustainable, seasonal ingredients.

“I came to see that it was possible for a brewpub in an urban setting to be a place where we could interact with farms and producers –– not only are they sending us product, but we’re sending them what we would consider waste, like whey from our cheesemaking, and spent grain from our beer,” he says. “The more I looked into it the more I realized there were more synergies and more ways that we could be smart about the whole system.”

Their meat and butchery program is an example of this vision of food sustainability. Every week, a full steer from the Enright Cattle Company and an entire pig from Linton Pasteur Pork are delivered to the restaurant.

“Instead of serving 100 cuts from 100 different animals, we’re using all the cuts from one animal, Meighen says. “By the time we’re done with one animal we can use absolutely all of it.”

Campbell can make everything from prosciutto to pâté. While some meats, such as salami, pastrami, and pulled pork, take about a week to prepare, other cuts take months, or even years, to mature, so Avling’s offerings are designed to grow over time.

Chef Barr’s penchant for comfort food is perfectly expressed on the menu, which is populated with items that balance freshness with indulgence. There’s the savoury turnip cake, which is a take on a traditional Chinese dim sum favourite. This gluten-free dish is created with rice flour and mushrooms from Kendal Hills Farm, and then drizzled in a generous portion of house-made buttermilk ranch dressing. It’s topped with scallions from the rooftop garden as well as sliced chives ($14).

Next up is a dish Barr refers to as “Ode to summer.” She takes yellow wax beans and deep fries them, tempura style. They rest on a meyer lemon aioli and are finished with freshly picked sorrel. ($10)

The charred broccoli stems ($12) make use of a part of the plant that isn’t necessarily everyone’s favourite.

“We use the tops of the broccoli and puree that down with garlic confit and some other tricks in our back pocket,” says Barr. Then the stems are fried, also tempura-style, and laid atop the dukkah spice-flavoured hummus and finished with fresh mint.

The large space, designed by LAMAS Architecture Ltd. has a few features that will make you want to linger and explore. First off, in the main room there's a colourful abstract mural by Madison van Rijn that borrows the best parts of the ‘80s aesthetic and channels it into a modern work. You can pull up a pastel chair around the circular bar and admire the art as you sip on a buckwheat saison or Belgian ale.

However, the highlight might just be the rooftop garden. While the space is not licensed yet (that’s to come), diners can venture to upstairs on a tour and get a glimpse of the brewpub’s philosophy in action as they step between rows of basil, kale, and field peas with a view of the city in the background.