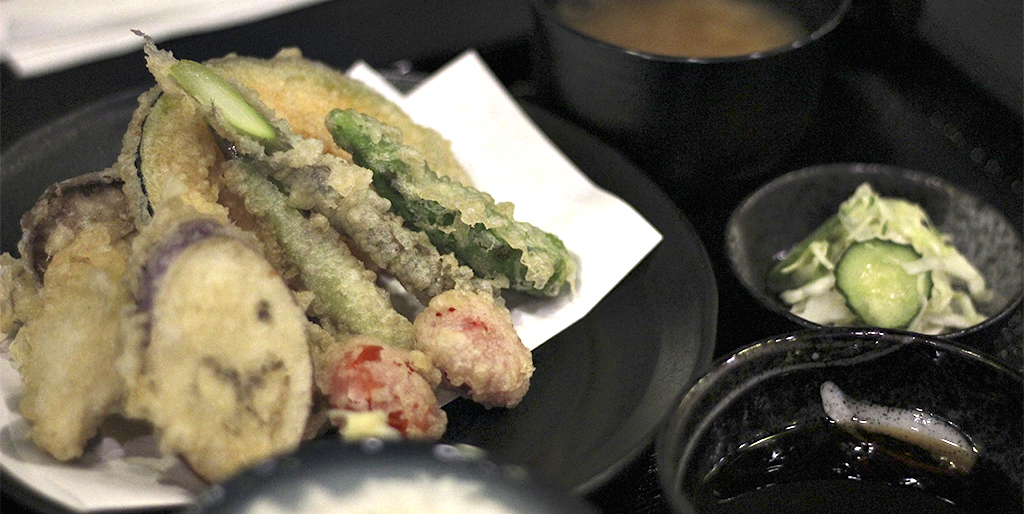 Toronto’s first specialty tempura donburi (which is abbreviated to ten-don) restaurant has officially opened downtown. Akimitsu, also known as Shitamachi Tendon Akimitsu, is a global chain of restaurants specializing in tempura-battered shrimp and seafood over rice.

With successful outposts in Singapore, Australia, United Arab Emirates, and Malaysia, they mark their first North American foray with this shop on the second floor of a handsome Victorian building on Elm Street. The restaurant is situated just above the downtown location of the already beloved, Michelin-starred ramen shop Konjiki Ramen, which opened in North York two years ago to great foodie fanfare and lines out the door.

In a city where most people’s perception of “tempura” is a basket of panko-battered shrimp served alongside sushi — as an app, or a side, but rarely the main event — the idea of a restaurant that is exclusively focused on tempura might seem counterintuitive. But in Japan, tempura is an art, and the donburi (which means “rice bowl”) is about as comfortably common as a sandwich in North America.

One thing diners might be surprised by when they walk into the narrow, fast-casual space, is the nutty aroma pervading from a large vat of gold sesame oil cut with black sesame oil in the open kitchen by the back of the space. Chefs dip battered shrimp and veg into the roiling oil and each morsel emerges crispy and golden brown. The tempura is dipped in a special blend of sesame oils to create a nutty aroma and enduring crispiness.

Another thing that diners would be surprised by is the sheer diversity of tempura items served in their specialty ten-don, from a crispy jalapeno that collapses at first bite, to buttery cuts of herring, a wide strip of roe still attached. In one bowl, battered jalapeno, king oyster mushroom, shrimp, herring, salmon, seabass and diced squid sit atop a bed of seasoned rice. Diners can order an accompanying onsen egg ($1.50), named for the hot springs in which the eggs are traditionally cooked. The egg is lightly poached and floating in a delicate broth of dashi, soy sauce, mirin and sugar. Once the tempura has been picked over, you’re supposed to mix the onsen egg into the leftover rice, which has caught the crumbs that have fallen off the tempura, and finish the dish that way. The result is pure comfort: gooey, and eggy, with the unexpected crisp of batter in rice laced with the broth of the onsen egg.

The vegetable set ($13.50) comprises seven pieces of vegetable tempura and is served with rice, miso soup, and a side salad. Apart from the ten-don bowls available (each with different combinations of vegetables and seafood), there is a small list of appetizers and salads, including tako-wasabi, a cold squid dish spiked with wasabi, and tofu salad. Their special wagyu beef shoyu ($19.50) ramen is only offered on Monday, Tuesdays and Sundays.

Konjiki Ramen has also added a new vegetarian ramen ($14) to their menu, with an avocado and soy milk base.

This vegetarian option marries the freshness of avocado and soymilk with the earthy nuttiness of porcini mushrooms and fried yams.