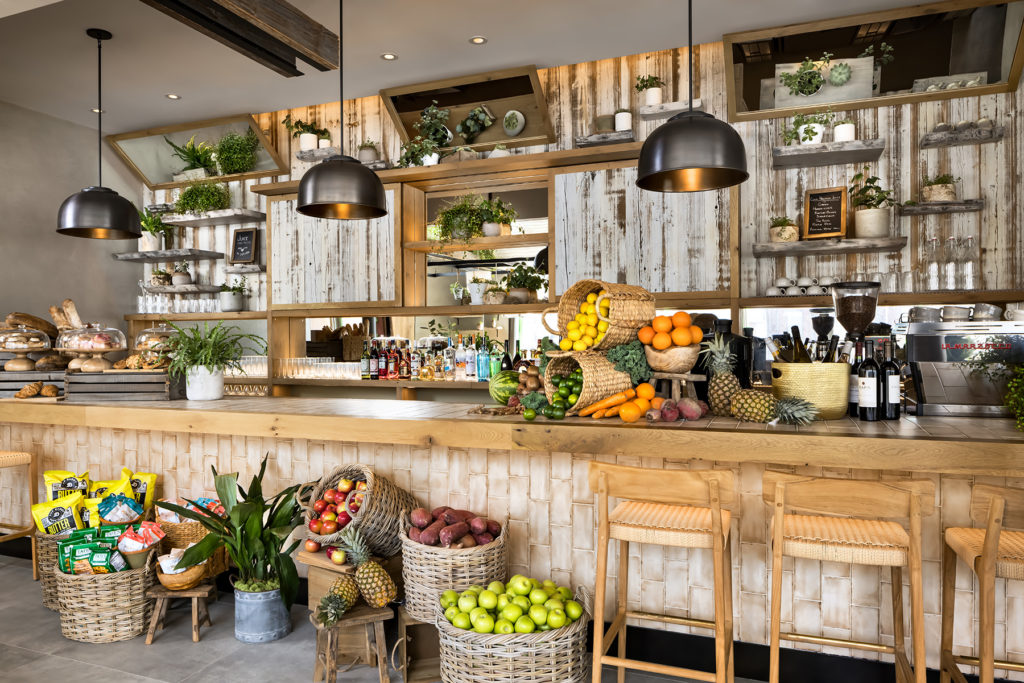 Walking through the doors of 1 Hotel, one might feel as though they're in familiar territory.

1 Hotel Toronto is also Canada's first eco-conscious luxury hotel that celebrates the beauty of Toronto's natural environment and offers an urban oasis in the heart of the city. 1 Kitchen Toronto and Flora Lounge are two of four restaurants tucked inside 1 Hotel Toronto.

1 Kitchen, bathed in natural light and adorned with hundreds of living, hanging plants, replaces the old Thompson Diner adjacent to the hotel. Flora Lounge is located in the hotel's lobby, and is unmistakeable thanks to a breathtaking living wall located right behind the bar.

The menu at 1 Kitchen and Flora Lounge was created by Chef Derek Powers Jr. who has held culinary positions in world-class culinary destinations such as Los Angeles, Miami, Las Vegas, Nassau Bahamas, and Saudi Arabia.

The culinary team at 1 Kitchen takes pride in their relationships with the local farmers, purveyors who supply their kitchens with high-quality, sustainably -made products. Farmers across Ontario provide the culinary teams at both 1 Kitchen and Flora Lounge with quality, fresh produce so that guests can savour the seasons while they work to preserve the environment by purchasing locally-made products.

"When I started working with the brand, they wanted to focus on sustainability, and I wanted to make sure I brought that and tailored it to the city of Toronto," says Powers. "We wanted to touch as many cultures as we could at the same time, and we came out with this beautiful product."

"The team that I inherited at 1 Kitchen is just fantastic; it's very multicultural, so you'll see elements of what my team loves to do in the food as well," Chef Powers continued.

Roughly 80 per cent of the dishes on the menu at 1 Kitchen are plant-based and the remaining 20 per cent features locally sourced meats. The majority of the dishes are made using ingredients within a 100-kilometre radius of the restaurant, which pays homage to one of 1 Kitchen's main suppliers, 100 KM Foods.

The sourdough bread used in the charcuterie board at 1 Kitchen and served with the whipped ricotta and wild honey spread at Flora Lounge is delivered by Forno Cultura.

Along with sourcing local products from a well-rounded list of suppliers in Ontario, 1 Kitchen also cultivates a lot of its ingredients onsite at the Garden Pavillion.

Just outside the doors of the restaurant, the Garden Pavillion supplies the on-property restaurants (including 1 Kitchen and Flora Lounge) with a selection of crops including 100 percent organic herbs, fruits, lettuces, edible flowers, peppers, onions, beans, and specially hybridized pollinator perennials and shrubs.

1 Kitchen currently seats 108 seats inside and 80 seats outside. The menu remains hyper-seasonal, so come fall and winter, diners should expect a different menu.

A brunch menu is also available at 1 Kitchen on weekends.

1 Kitchen serves a variety of international wines available by the glass or bottle, as well as a list of beers.

Guests can also build their own spritz by choosing from prosecco, champagne, or rose champagne as a base, then adding Aperol, and infusing it with the following: lychee+rose, mango+serano chile, or strawberry+rhubarb.

A series of health and elixir-driven drinks are also available, and incorporate immunity-boosting ingredients like wild honey, cayenne pepper, turmeric, aloe vera, and matcha, among others.

A juice bar offering fresh-pressed juices is also available at the counter.

Like the restaurants themselves, all of the drinks at Flora Lounge and 1 Kitchen can be made vegan by replacing drinks that call for egg whites with aquafaba (chickpea water), which produces a very similar texture.

Sustainable design is a pillar of 1 Hotel properties, and this transcends into 1 Kitchen and Flora Lounge.

Emphasis on working with sustainable, like-minded partners wherever possible is seen across all hotel operations and aims to encourage guests to discover a deep connection to nature and the importance of preserving it.

Just Be Woodsy is a local woodworking studio that gives fallen Toronto trees a second life by transforming them into one-of-a-kind furnishings, which include the serving boards for light bites served in Flora Lounge and 1 Kitchen.

Each board also includes a unique set of latitude and longitude coordinates that allows diners to see where the tree used to create the serving board came from.

Even the bees get their very own accommodation at 1 Hotel Toronto, with a special custom-made bee hotel that's designed to attract native bees and pollinators by building a habitat uniquely designed for their nesting preferences.

1 Hotel and its restaurants are committed to harboring a zero-waste facility. The on-site composting program turns all organic wet waste into reusable soil to be used in the more than 3,300 living plants located throughout the hotel, garden, and restaurants.

Nearly 85 percent of all food waste is converted into organic matter to feed the plants.

-Photos and text by Christine Hogg