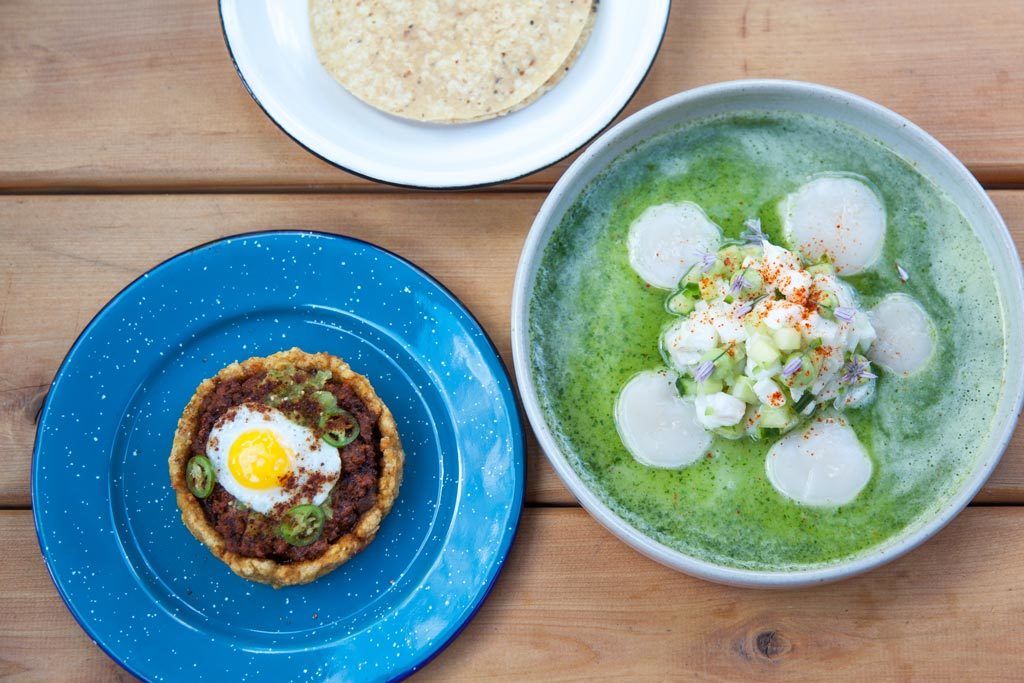 There’s a babe at the next table wearing booty shorts. And both legs liberally tattooed in bright colours. Her swain, equally inked, has a greying ponytail. A brief and highly informal survey of the customers at El Rey, the new resto owned by Grant van Gameren and Owen Walker, indicates that the majority of the customers are more like the aforementioned couple than like me and my equally aging uptown spouse.

Which is a good thing. I’m guessing they like El Rey for its cocktail extravaganzas and Mexican munchies. After all, this is Kensington. People need munchies. Which don’t have to taste great.
And they mostly don’t. The only standout I tasted on the menu is green ceviche, which is impeccably fresh raw scallops and marinated halibut in pale green blender-whizzed sauce with coriander and lime. It’s delicate, citric and creamy all at once. But all else disappoints, especially in taqueria town. I personally liked the Peruvian anticuchos, which were little skewers of grilled chicken hearts with chimichurri sauce, tiny fried potato cubes and a lot of oil. But not everyone favours either chicken hearts or oodles of oil for dinner. Bar food.

Does the world really need a deep-fried slightly mealy potato/corn tortilla holding refried beans and chorizo with tomatillo salsa on top? Or seafood cocktail made of octopus, oysters, shrimp, olives, avocado and clams with tomato, orange and lime juice — with enough sweet to make it sophomoric. And saltines on the side? Is that to be retro and cool? The saltines go well with the store-bought corn tortillas.

But it’s dessert time when the biggest letdown happens. Their one dessert is plantains with nut crumble and goat caramel. The crumble and the caramel are munchies madness, super-sweet buttery crunchy. The sweet that makes your teeth hurt. But the plantain — like most other plantain — is the texture of shoes. Most unfortunate.

Do we think Grant has tasted it? We know he didn’t cook it.

I’m always nervous when a superstar chef expands. Can he control more than one kitchen? Will it be his hand on the tiller? In the case of Bar Raval, Grant’s second resto after the superlative Bar Isabel, we taste his imprimatur everywhere. But El Rey is a frank statement of Grant owning the shop with the food vision of others. Grant fell for the cooking of the Montreal husband-and-wife team Kate Chomyshyn and Julio Guajardo (La Catrina, Tuck Shop, Le Comptoir). He went to Montreal, tasted their food and hired them to helm El Rey. It’s a cute spot, with bar and small eating tables inside and a front terrace with a good view of the Kensington parade. The flights of mezcal are dandy. One feels almost cool just by showing up. No reservations of course. Would you want one?

El Rey, plus the fact that Grant is opening yet another bar, this one in Parkdale, begs the question: If I could use my name to make money without having to show up, would I? Would you?