Restaurant Review: Miku Toronto is great — if you like accessible, unchallenging sushi - Streets Of Toronto
Skip to content 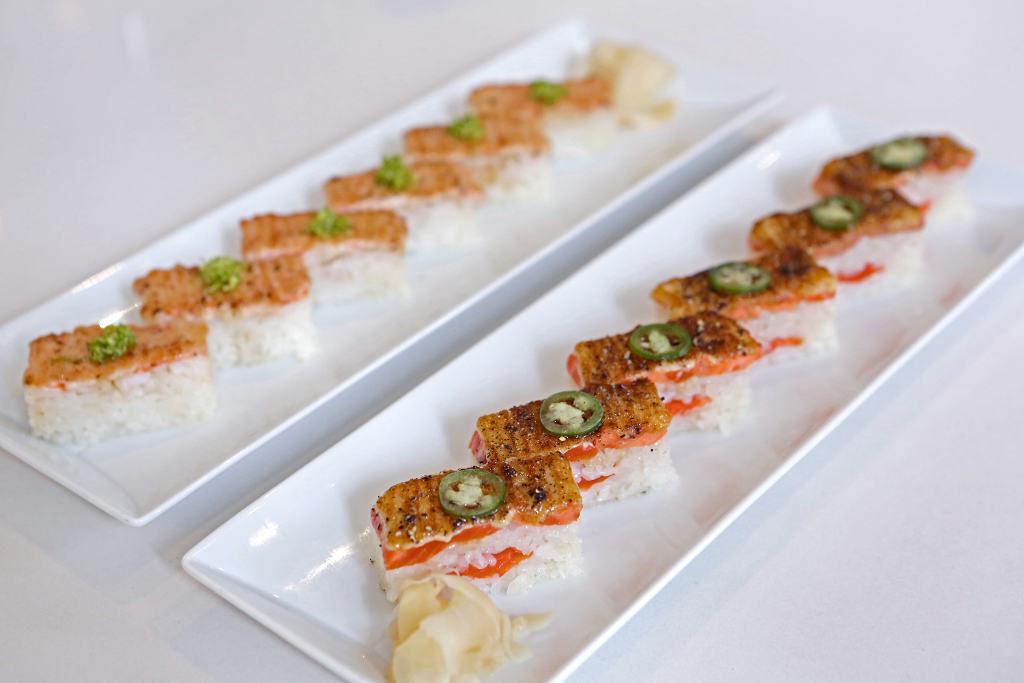 If I were orchestrating a Big Night Out, let’s say a date with somebody I wanted to impress, and that somebody was not a sushi lover … and money wasn’t really an object, hands down I’d take them to Miku.

Because Miku is hands down the fashion capital of downtown, the It spot of this winter. Nothing weird or slimy there, it’s all — to put it kindly — accessible sushi. Miku is a high-end super-snazzy chain restaurant. It started in Vancouver and southern Japan and has opened its first Toronto outpost — 7,000 square feet of glitz and glamour, a triple height wall of glass facing Queens Quay, big banquettes and flattering lighting, a long curving sushi bar with a huge fish mural behind it. And the servers aren’t too hard on the eyes either.

This is a formula that works very well. It took me a month to get a reservation and they’re turning tables at a ferocious rate. All these people are happy to pay Miku’s prices? Our dinner for two — with moderate alcohol — cost $205 plus $16 for parking.

Not a cheap date.

But so unchallenging. Miku specializes in aburi sushi, which is lightly torched and hence slightly cooked. Then there are the garnishes. Aburi is the anti-soy ’n’ wasabi sushi. None of either is proffered with aburi. Instead, Miku garnishes its sushi with a fabulous collection of mostly westernized treats. This is truly not sushi for the trad sushi lover. If perfect plain raw fish is your thing, not for you.

Foie gras on your sushi? Edible flowers? Gold leaf on top? This is Miku. Aburi salmon with jalapeno is done oshi, which means they press it in a wooden box to intensify the flavours and render the texture creamier. Cooked lobster sushi is scented with lime. Pressed prawn sushi comes topped with lime zest and ume sauce. Mackerel nigiri has ikura and a dashi jelly sheet draped over top.

It’s all beauty-pageant gorgeous and quite delicious. Just different from regular sushi. And not quite as tasty as the aburi at Ja Bistro on Richmond Street.

Seigo Nakamura, who owns the chain, has nine restaurants in Japan and two in Vancouver. He hopes to open outlets in Europe and Dubai, with a franchise business starting in London next year. The goose that laid the golden egg.

Joanne Kates trained at the Ecole Cordon Bleu de Cuisine in Paris. She has written articles for numerous publications, including the New York Times, Maclean’s and Chatelaine.