Residents of Leaside are beginning to worry with upcoming Costco, Walmart and condo development projects - Streets Of Toronto
Skip to content 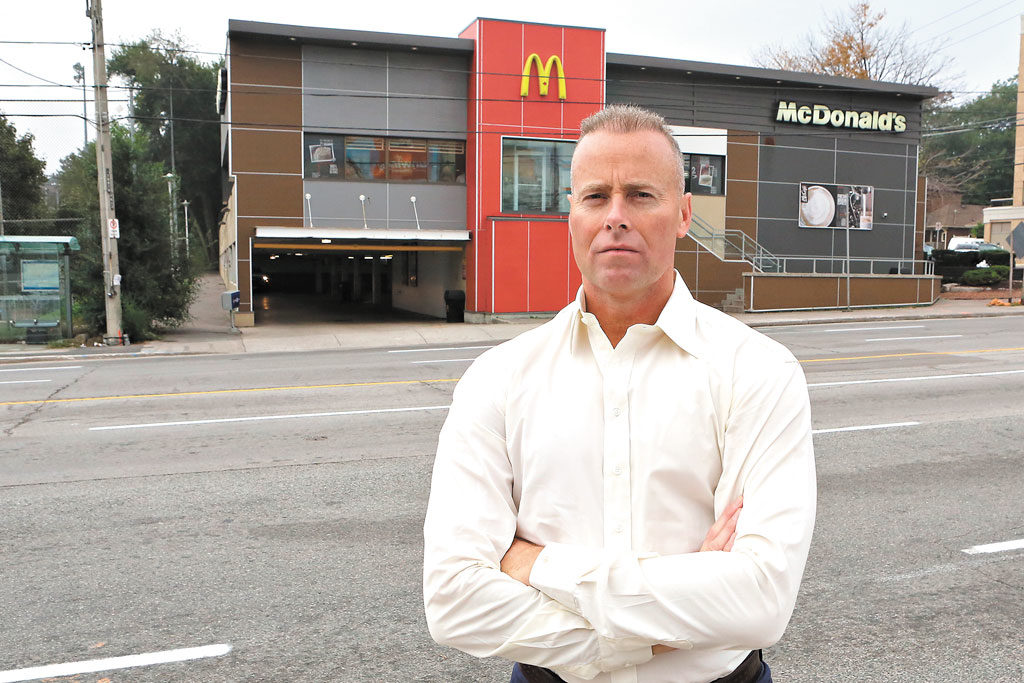 It’s a refrain heard across the city time and time again: concerned residents are desperate to preserve the character of their local neighbourhoods and stem the overwhelming tide of residential development sweeping across Midtown Toronto. But things will not remain the same. That much is obvious. The trick is staying ahead of the wave and trying to control it before developers or Ontario Municipal Board (OMB) take matters into their own hands.

The Crosstown LRT is coming. So, it seems, are big box stores and a number of large-scale residential condo projects including two on the corner of Bayview Avenue and Eglinton Avenue East and a game-changing proposal further east. It’s a lot. Things are moving so quickly in Leaside that any attempt at marshalling the troops to present a unified vision of neighbourhood development will soon be too little too late.

Residents of Leaside are beginning to worry if the end of their beloved neighbourhood is just around the corner.

There are not one but two possible big box stores — a Walmart near the corner of Laird Drive and Eglinton and a Costco in nearby Thorncliffe Park — that will impact the strip of main street shops on Bayview south of Eglinton, the heart of Leaside to many.

There are a number of residential condo projects peppered throughout the neighhourhood, including on Laird, to the east, and Bayview and Eglinton, but none is larger than a massive proposal for four condo towers and a mid-rise office building of varying heights at Eglinton and Brentcliffe  Road that would include 1,300 residential units.

The development has been portrayed as one that will set the agenda for other large-scale developments on that strip of Eglinton Avenue East, including the Leaside Centre at Laird Drive and the redevelopment of the Staples site immediately to the west.

“It would definitely set the precedent, which is why it is so dangerous with two other huge properties nearby,” said local councillor Joe Burnside. As for the future of development along Eglinton, he went on to say that “a focus study was identified for this stretch in 2013 but never undertaken. It is now planned to begin mid 2016 but not in time for this application.”

Local residents’ meetings have become heated battlegrounds with developers facing off against up to 500 people per meeting. Groups such as Leaside Unite, Leaside Matters and Preserve Leaside have emerged to give voice to angry residents.

Remarking on recent residents’ meetings, Connor Turnbull, the co-chair of Leaside Matters and an architectural historian, was impressed with the turnout and composure of participants.

“Leaside residents were so well-informed,” she said. “I couldn’t believe they kept their cool. It could have been a mob scene.”

Coun. Burnside has been hearing from residents over the coming stores.

“I think 95 per cent of the community is concerned about this,” said Burnside. “Everyone in Leaside is worried.”

Turnbull compared the current wave of development to a “sledgehammer” coming down. “Even one of these developments is too much. All of them together, it’s like a tsunami,” she said. “Collectively these projects begin to demolish the unique character of this neighbourhood.”

The design of Leaside was inspired by the Garden City urban planning movement of the 19th century. Followers of the philosophy sought to plan neighbourhoods as self-contained communities surrounded by greenbelts that featured a balanced mix of housing types and industry. Don Mills as well as Mount Royal in Montreal were laid out according to these principles.

“Many of the new residents don’t know this history. They have a sense that there is something unique about this neighbourhood, but they don’t quite know what it is, be it the curvilinear streets or the mixed-use buildings,” said Turnbull. “That’s in danger of being lost.”

Burnside recognizes that unique nature. “It was designed as an end-of-line community with a distinctive grid pattern. It’s very beautiful. So when residents see this new type of development, they fear it is tearing at the fabric of a community,” he said

The neighbourhood has slowly evolved with infill homes replacing bungalows, for example. But the pace of change has quickened. One project of particular concern is a condo project proposed by RioCan for the northeast corner of Bayview and Eglinton, home to Sunnybrook Plaza.

Elaine Biddiss, a lab technician, assistant professor and Leaside mother, recently wrote a report outlining her concerns with the development.

Her report notes that two City of Toronto studies recommend that development along avenues consist of mid-rise buildings. Original versions of these studies called for buildings of just six storeys and eight or nine storeys in later versions. When the RioCan plans were released showing a 19- and a 13-storey tower, Biddiss was floored.

“To see these reports ignored is disappointing,” said Biddiss. “The city puts a lot of time and effort into these [planning studies]. These were done democratically, with lots of input. The vision in these reports was itself a compromise. Many people did not even want the small mid-rise there. So when the debates are done and the proposal comes in at 19 storeys, it’s like a kick in the teeth.”

The Leaside Property Owners Association (LPOA) recently appealed the RioCan development to the OMB and now is being invited to a pre-OMB hearing with city staff to discuss the concerns. (Executives of the LPOA did not want to comment before an upcoming board meeting.)

Burnside admitted, though, that for all intents and purposes the RioCan development is in the can.

However, the next source of conflict might be right across the street. Although not yet submitted to the city, it looks like the Metrolinx station scheduled for the southeast corner of the intersection will be part of another development deal that could also include a condo tower.

It isn’t just residential development that is worrying local residents. Large-format retail operations, the so-called big box stores, are also in the works including the biggest of all the boxes: a Walmart and a Costco.

Last month, Jennifer Keesmaat, the city’s chief planner, spoke about her vision for Leaside, putting the new developments in the context of the city’s official plan.

“I hope nobody thinks there will be no development in these spaces, because you will be disappointed,” she said, before providing some hope to concerned residents in the form of a traffic study and a potential Heritage Conservation District, also suggesting residents could be a part of the solution by joining working groups such as the one Coun. Burnside announced he is setting up for the Brentcliffe proposal.

“Get involved in the working group. This is where residents can have an effect on development,” Keesmaat said. “Be realistic. Participate in the process.”