Don't look now, but the fiery debate over approved bike lane project on Yonge might be restarting - Streets Of Toronto
Skip to content 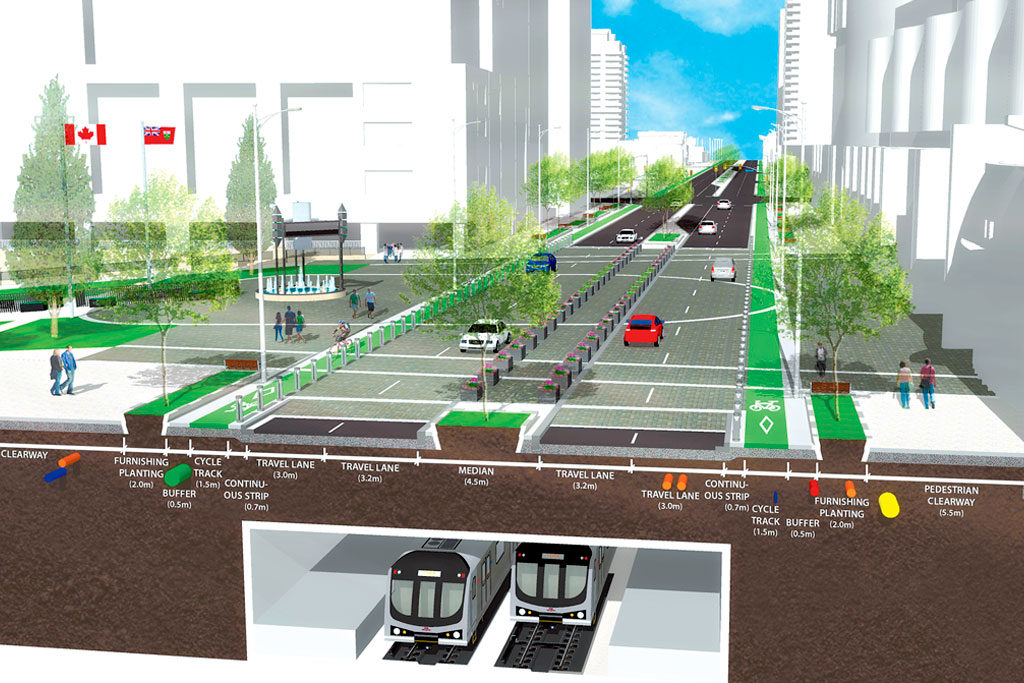 The Korean Canadian Business Association in North York has teamed up with newly minted Willowdale city councillor Lily Cheng in its battle to reopen the approved and once hotly debated REimagining Yonge plan.

The city council-endorsed plan, the approval of which dates back to December 2020, would see traffic lanes on Yonge Street between Florence Avenue/Avondale Avenue and the Finch Hydro Corridor reduced from six to four lanes. In the approved complete street makeover, the pedestrian realm would be greatly enhanced with wider sidewalks and boulevards, and improved pedestrian crossings. But what seems to really be sticking in the craw of local businesses is the inclusion of separated and safe cycling infrastructure and that age-old chestnut: bike lanes are bad for business.

City council approved the project on Dec. 16, 2020 by a vote of 18 to 5 with two councillors absent. Mayor John Tory voted for REimagining Yonge.

Cheng acknowledged that the Korean Canadian Business Association contacted her to reopen the debate. She said that when the plan was originally proposed some local businesses didn’t feel included as a result of language barriers and other issues. She hoped to correct this by proposing REimagining Yonge as a pilot project and then study the data and arrive at a plan that the local community can get behind without feeling left out of the process.

“I don’t want to cancel REimagining Yonge because we do want that beautification investment enlarging our sidewalks. But do we include parking? Because right now, the design does not include street parking,” said Cheng. “And I know for instance on the Danforth for their bike lanes, they have still maintained some parking for the local businesses. And so we need data. Data can bring us together as well as a shared experience.”

Cycle Toronto spokesperson Maggie Crawford is okay with the pilot project scenario. Although the bike advocacy group has yet to hear from the Korean Canadian Business Association or Coun. Cheng, Cycle Toronto has reached out and is hoping to meet with the councillor sometime in the coming weeks.

Crawford points out that Destination Danforth, the recent complete street makeover of Danforth Avenue east of the DVP has been a success and is being extended further east. It started as a pilot project.

“From what we can tell, it seems like she’s (Cheng’s) proposed a pilot project that would involve bike lanes,” said Crawford. “And I think that’s always a great start for a project like this because it gives people time to give feedback and it gives the city time to make potential changes. But also usually, once it’s there, people realize that it’s not just okay but, actually, it’s often better.”

To oppose REimagining Yonge, a petition has been put on the site Change.org entitled “No Bike Lanes on Yonge Street,” which has garnered a whopping 700 signatures over the last three months.

Comments on the petition site include some of the same talking points that were brought up during the lengthy debates when the project first came to light more than five years ago: there’s too much traffic already, nobody rides bicycles in North York, bike lanes are bad for business, and of course a few of the classic, “F–k cyclists,” which is always very convincing.

Crawford said not only do bike lanes not hurt local business, they actually help it and help reinvigorate neighbourhoods, unlike automobile drivers who tend to use Yonge Street in North York as an expressway between work and homes to the north of Toronto.

“We’ve seen this with multiple other projects like Destination Danforth, and the Midown Yonge Complete Street Project – generally what happens is that it’s actually better for businesses, and it increases sales in the long run because people who are cycling and walking, when we’re increasing that amount of traffic on the street, those are the people who are customers,” said Crawford. “They’re spending money and they’re not just commuting through using the road as a way to get from point A to point B. What we see is that space actually becomes more of a destination instead of just a passing through road.”

REimagining Yonge has long been championed by former city councillor John Filion, who retired ahead of the recent municipal election. The project, which dates back at least six years, was shelved at one point following months and months of debate that at one point involved Doug Ford as well as John Tory sketching out alternative routes for bike lanes.

At one city council meeting regarding REimagining Yonge, Ford was asked by Filion whether he had read the report, and Ford replied, “I don’t need to read a staff report to see they’re going to destroy Yonge Street.”

The project made a comeback during the pandemic when the city and indeed cities around the world began to realize the importance of urban cycling and pedestrian life.

Cheng is not debating the importance of urban cycling, but she did campaign on giving her Willowdale constituents a greater voice in local decision making.

“If you live in Willowdale, you will discover that the political climate is one where many people have felt that they have not been included in decision making, and it’s one of the reasons I ran for city council,” said Cheng.

“Willowdale is very unique, because we are part suburb and part urban. So we have a very urban concentration along Yonge Street, but anyone who lives you know, let’s say a 10- or 15-minute walk out from Yonge, they would be more car dependent, less likely to walk to frequent the businesses.”

She said a new process with a pilot project and greater consultation with the community is key.

“For me, the journey is that we pilot the bike lanes with a very clear feedback loop with the businesses, the people who are car dependent as well as people who are using bicycles to come up with the best modified design,” she said.