Real Estate Roundtable Update: Where will the market head after this summer’s slump? - Streets Of Toronto
Skip to content 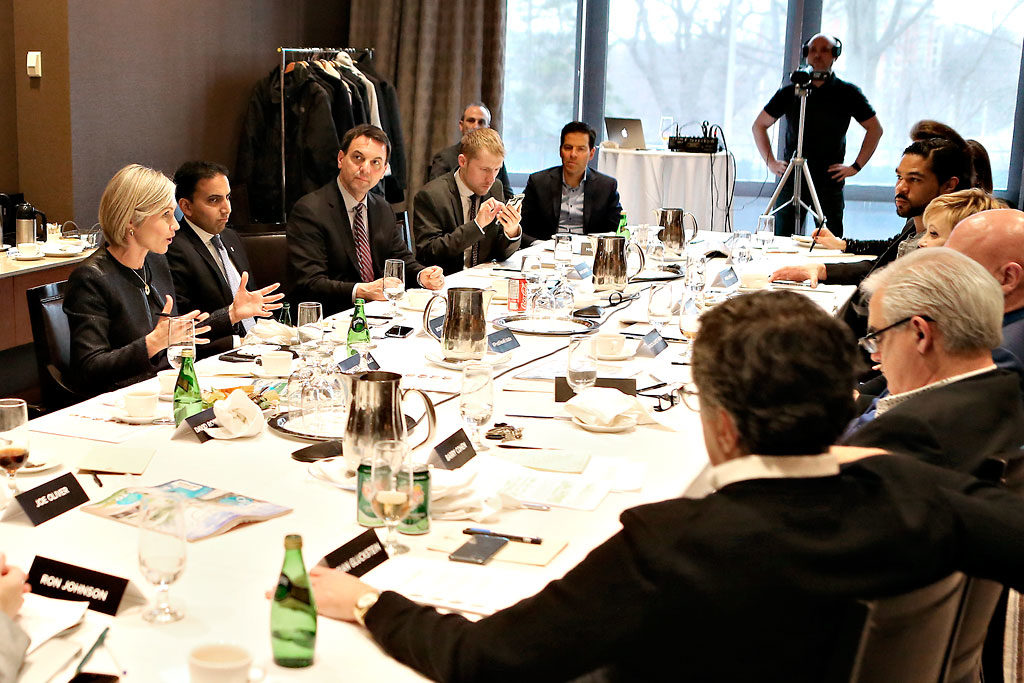 Our panel of experts share their predictions for the fall market and weigh in on why some pockets of Midtown remain white-hot while other areas, such as York Mills, have seen a noticeable decline in sales.

Post: What are your predictions for Toronto’s real estate market come fall?

Barry Cohen: The GTA’s housing market is expected to show signs of improvement come fall. Listings are forecast to match or fall short of last year’s levels as some sellers continue to hold back, if only initially. The new buyers are and will remain cautious, especially after a particularly challenging summer. However, once inventory levels come down and those who have been sitting on the fence make their moves, the market should firm up.

While prices may continue to correct in the short term, prices should level out and stabilize in months to come, and I wouldn’t be surprised to see a slight uptick in average in the fall. One should keep in mind that values traditionally fall during the summer months, and the 33 per cent gain reported in the spring was unsustainable and had nowhere to go but decline.

From an economic perspective, the fundamentals are strong. Unemployment rates are low, and job security is good, which was not the case during the ’89 correction.

Jennifer Keesmaat: Making predictions about the direction of the market in the short term is always challenging. But I do agree with Barry that the fundamentals for Toronto remain very strong. Unemployment is low, and [the city’s] annual Toronto Employment Survey identified a new record in terms of the number of jobs within Toronto. We can also consider other factors that underpin the city — a continuing influx of prominent international companies, high rankings on livability indexes and a growing global awareness of Toronto. Toronto in 2017 is a different city than it was when it entered the last major market downturn in the 1990s. So while we may see (and even welcome) short-term corrections in the real estate market, I am positive about the long-term trajectory for Toronto. With that said, it is paramount that we plan and invest for this future to ensure that the city achieves its full potential in the coming decades.

Brad Lamb: I believe that the Toronto real estate market will continue to see price increases and volume increases over the fall; however, the zaniness from October 2016 to March 2017 is over. We’re back to a more sane marketplace where price increases will likely be five to eight per cent per year. There is absolutely no reason why average prices will fall going forward. The spring 2017 shock took place after the premier made moves to cool exploding demand. Those policy moves will be measured and absorbed by buyers. They will realize that fundamentally nothing has changed, real estate prices will once again march forward. As long as the economy is expanding, jobs are being formed, the unemployment rate remains low, vacancy rates remain low, commercial vacancy rates stay low and interest rates stay low, not much can cause prices to fall. People don’t stop buying goods and services (including homes) during times when the overall economy is good.

Tim Hudak: Currently, we’re seeing consumers taking a wait-and-see approach to the market. Prior to the government’s introduction of the Fair Housing Plan, real estate prices were rising. The government launched a couple initiatives, for instance a foreign buyers tax, that had a psychological impact and has homebuyers on the sidelines watching what’s happening.

But despite the decline in sales, many Toronto brokers I’ve spoken with are seeing a comeback in sales and multiple offers on properties. It would not surprise me if Toronto’s market took a similar trajectory to Vancouver’s after a foreign buyers tax was implemented there. There were a few months of slower sales, followed by a return to a robust market.

Brian Gluckstein: I think the market will be steady and purchasers will be thoughtful in their buying. There won’t be that same frenzy. I don’t see any major downturn this fall.

Post: Why are some pockets of Midtown, such as Casa Loma and Forest Hill, still white-hot while others, such as York Mills and the 905, have experienced a noticeable sales slump?

Cohen: Location, location, location is the short answer. These markets have held up relatively well to market influences, in large part due to their close proximity to the city’s core. If you look back, these are the areas that first experienced tight market conditions, low inventory levels and bidding wars. Areas like Oakwood Vaughan also offer up some of the most affordable single-detached homes in the central core, in and around $1 million.

This area has also been a favourite with foreign buyers and that’s had an impact on the market as well.

Keesmaat: First, this is a level of detail that I must refer to my real estate colleagues. From a city planning perspective, more broadly, we know that neighbourhoods near transit and walkable main streets are more resilient in terms of how they hold their value in general. Areas that appeal to end users, as opposed to investors, will on the whole prove to be more stable neighbourhoods.

“The 33 per cent gain reported in the spring was unsustainable and had nowhere to go but decline.”

It would be problematic to draw long-term conclusions from what I view as short-term anomalies. Rather, how Toronto grows — such as whether we make the transit investments required to support a rapidly densifying city — will determine which neighbourhoods thrive.

Lamb: Great neighbourhoods with a shortage of property will continue to boom. Other less desirable neighbourhoods that have a larger potential supply of property may not see the same increases. For instance, both neighbourhoods of Forest Hill and Casa Loma are very small in terms of the number of homes they contain. They are also very desirable places to live due to their proximity to the city and the excellent nature of the homes.

Gluckstein: I think there are people coming from other areas of the city who want to be closer to the downtown core, in a walkable neighbourhood close to shops and restaurants, while still maintaining a quiet, green neighbourhood feel.

Keesmaat: Condos, particularly those in desirable locations with walkable access to transit and amenities, remain a desirable housing choice. In comparison to low-rise housing options, they provide lower cost access to some of Toronto’s most desirable neighbourhoods. Many families are now making the conscious choice to live in condos, eschewing the burden of a long commute required to find a comparably priced low-rise alternative. While this does not mean condos are immune to a price correction, I do believe that this form of housing is here to stay as Toronto continues to transition into a denser city.

I also hope that the great work my team has been advancing related to designing neighbourhoods and condos as a first choice for families is encouraging more interest. This summer has seen the launch of some spectacular new parks — Grange, Berczy and Trillium. Investing in public space is making the proposition of condo living even more desirable, as a new generation trades backyards for a more urban approach to everyday life.

Whereas in the past condos were viewed primarily a s starter homes, as the character of our city shifts, the role condos play in the housing market is shifting too.

Cohen: For many first-time buyers in the Greater Toronto Area, condominiums represent the first step in home ownership. The urban lifestyle is especially popular with younger purchasers, many of whom are attracted to affordable units within the downtown core that are close to work and play. Demand, however, is not limited to first-time buyers. Empty nesters and retirees are drawn to units in the centre core that are within walking distance of shops and restaurants. Families are drawn to condominium townhomes and apartments in more suburban settings. Condominiums allow new Canadians to realize home ownership at an affordable price point. Investors also factor into the mix, given that vacancy rates in the city hover at approximately 1.3 per cent (according to the Canada Mortgage and Housing Corporation). With demand coming from so many different segments of the market, it’s not surprising that condominiums are holding their own. In fact, apartment condominium and townhome sales represented 35 per cent of total GTA residential sales between January and July 2017.

Lamb: Condominiums are not avoiding a correction because we haven’t had a correction. What we’ve had is a slight price setback due to an outside event caused by the government. This is not a market-driven event. This is not something that has happened due to market forces. This is something that happened because the premier enacted various policies to try to slow down the real estate market. Look to Vancouver as to how that will ultimately work out. One year later Vancouver has exactly the same issue as before. Low supply, higher prices. Buyers read the news. Some portion of buyers took a breather, hoping for a substantial correction. This is why things cooled a little. They will be back in the fall or spring. They will likely pay more money for the same house. Condos are in a good position because they are typically the affordable option. The Ontario Municipal Board changes, and planning delays have created a shortage of new units coming to the market. This shortage of new housing will get worse before it gets better.

Hudak: Toronto is a very attractive destination to live. We have 100,000 people, including new immigrants, coming into the city on a yearly basis. Right now condos are the most affordable housing option for first-time buyers and young families.

Going forward, governments should be focusing on supporting the development of more “missing middle” type homes, such as townhouses, stacked homes and mid-rise buildings, to give families more choice.

Gluckstein: I think it’s a combination of two factors. First-time buyers are getting into the market, and condos are still an ideal entry point. As well, Toronto appeals to people from around the world as a safe haven to both live and invest in.