Raw milk: what’s so good about it? - Streets Of Toronto
Skip to content 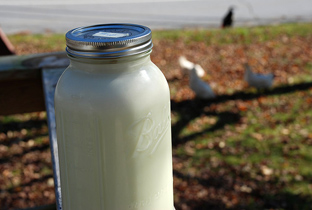 Last week, Michael Schmidt incurred a hefty slap-on-the-wrist (to the tune of $9,150) for charges related to selling raw milk. Not only that, he racked up two separate probation sentences for offences dating back to 2006. The guy clearly loves his raw milk. The government clearly does not. So what exactly is the deal with raw milk anyway? What makes it special enough to die for (or at least to abstain from eating for over a month)? Below, five reasons why raw milk has a cult following.

1. Taste the delicious taste. Of course, advocates will try to convince you that raw milk is the best tasting thing to happen to humanity since manna. But one thing is certain: raw milk certainly tastes different. Here is a pretty thorough breakdown of what to expect if taking the plunge.

2. It has more nutrients. According to some studies, milk loses vitamins, enzymes, proteins and beneficial bacteria during the pasteurization process. The Canadian government’s take, of course, is that “any possible benefits are outweighed by the serious risk of illness from drinking raw milk.”

3. Won’t somebody please think of the children? According to a large European raw milk study, kids who drank raw milk were 41 per cent less likely to suffer from asthma and about half as likely to develop hay fever.

4. Cows benefit from it too. Proponents of raw milk are generally not proponents of factory farming, growth hormones or antibiotics. You know the old term “a fit cow is a good cow?” No? Actually, we just made that one up.

5. Chefs go gaga over it. Raw milk churns out high quality dairy products like crème fraîche, butter, cheese, yogurt, clabber and whey. It’s all in the cream. The good news is that it is legal to sell raw milk cheese in Canada, provided it’s aged for at least 60 days.