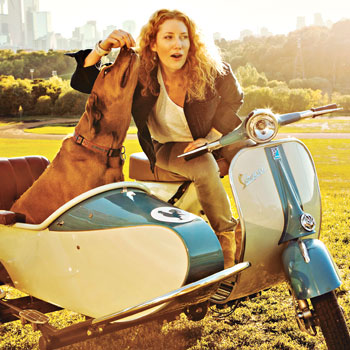 “This is the most out there I’ve put myself, and there are many days when I think not that it is a mistake putting all of my failures and all of my pain up for discussion, available to anyone,” says Toronto-based musician Kathleen Edwards, of her new album Voyageur, “but I feel exceptionally vulnerable, maybe more now than ever in my life.”

A number of the songs on the album were written while Edwards was still married and reflect a relationship in a downward spiral. Others came later and speak to some heartache but also looking for hope and finding your footing once more. It is Edwards’ best work to date on many levels, from the songwriting to the lush and gorgeous soundscape. And, as Edwards explains, it didn’t happen by accident.

“This was definitely the hardest record I’ve ever made,” she explains. “It was really, like, false starts, where you’d try something, it doesn’t work, and I’d go back to the drawing board. It was really excruciating.”

It didn’t help that Edwards heaped pressure on herself to shake the alt-country label she’s carried since her debut album, Failer, back in 2003. Sure, she says, she digs a good pedal steel. But that doesn’t make her the second coming of Loretta Lynn, so drop it already.

“I realized that I was stuck in the pigeonhole of alt-country and I don’t relate to that,” says Edwards. “I needed to find a way to make a record that proved that wasn’t me, without it being a betrayal or unnatural, that is far more reflective of my influences and my music aesthetic.… It was a pretty big goal to have in mind, and it was a really hard project to see through.”Along the way, a couple of fellow musicians provided enough of a creative spark to allow Edwards to fulfill her vision, including singer John Roderick.

“That really sparked a lot of momentum, going to Seattle and working with John,” Edwards explains. “By no stretch is he a renowned co-writer, but I really liked his work. He just had great lyrics and his music was really smart. I thought, ‘This guy isn’t going to just fill in the blanks with whatever sounds fine.’ ”

The result of that collaboration was the album’s first track, “Empty Threat,” and, perhaps more importantly, led to Edwards’ next collaboration, Justin Vernon of Bon Iver — the recent Grammy Award nominees with whom Edwards toured this past fall.

“I think the highlight of working with Justin is the fact that I felt like he knew my old material so well, and he was so respectful of all the things I’ve done and really understood where I wanted to go,” says Edwards.

Vernon ended up co-producing, with Edwards recording the bed tracks with her band in Toronto and travelling to his home studio in Wisconsin to work on the additional layers of sound and texture that distinguishes Voyageur from Edwards’ previous albums.

One song, above all, “I’m Going to Hell,” is indicative of Edwards’ raw emotional songwriting but also the incredible sonic soundscape she’s establishing. It’s no surprise that Edwards considers the song her biggest accomplishment.

“That song is a very true statement of some of the feelings I had about the last few years of my marriage,” says Edwards. “How it musically came together: Justin played a huge part in my finally accomplishing what I wanted to do. I had the exact foundation I wanted, and he would come in and help build and create a house of all these sounds. It’s a bit of a victory.”

This winter, Edwards heads out on tour in support of Voyageur, out Jan. 17. For more information, go to www.kathleenedwards.com.

BSS plus the Stills equals analog bliss
First, the Stills called it quits last spring, followed by Broken Social Scene — two major Canadian indie bands gone in the wink of an eye. Hipsters swooned. Music fans cried out for something new to fill the void in their limited edition vinyl libraries. Meanwhile, unbeknownst to all but a select few, Stills’ frontman, Dave Hamelin, and Liam O’Neil and BSS alum Justin Peroff were already at work on their project Eight and a Half.

When news broke, the excitement was palpable. Their debut album drops Feb. 7; a tour is imminent. And all is right with the world.

“There was a point near the end of the Stills where we took a five-month hiatus, and during that time, Justin came up to Montreal and myself, Justin and Liam decided to take advantage, and this is what happened,” says Hamelin, now living in Toronto.

“It was just a lot of fun. There was no pressure, or scrutiny. It is different when there are literally no expectations at all. Nobody knows you exist.… We still barely exist.”

The new music, a lush and ambient blend of electronica backing Hamelin’s tender vocals, isn’t a mashup of BSS and the Stills. Instead the trio went in a different direction that should allow them to carve out their own musical niche while winning over their ready-made fan base.

Currently, the band is working on new songs and rehearsing for a tour in 2012. For information, go to www.eight-and-a-half.com.