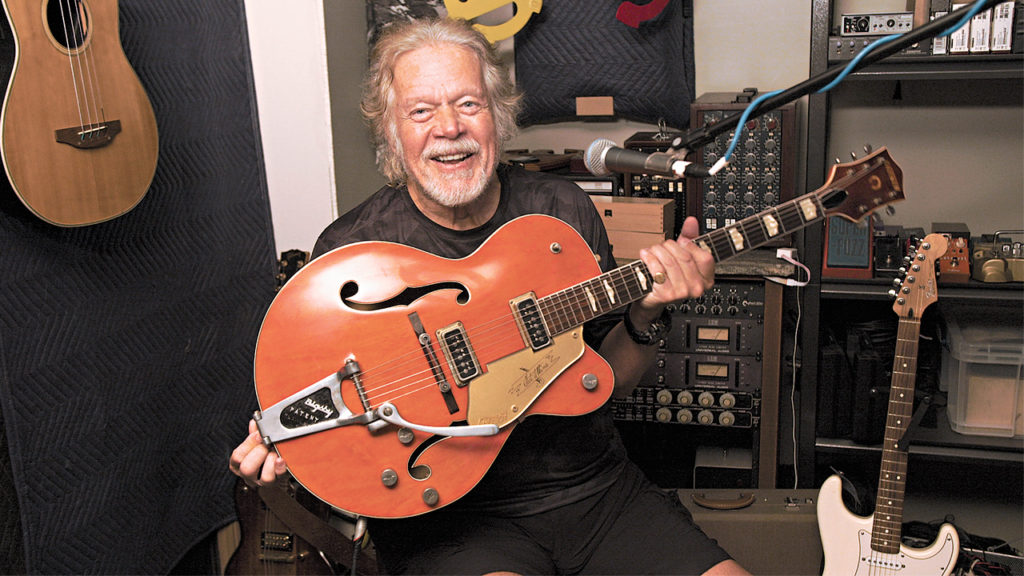 Randy Bachman, the legendary guitarist from The Guess Who and BTO made headlines recently with the incredible tale of being reunited with his first Gretsch guitar. We asked Bachman to recount the story of when the guitar was stolen in Toronto.

So tell us about the guitar.

I bought it way back in Winnipeg, Manitoba. I must have been about — I don’t know — 18 or 19. And that guitar was my guitar. For everything I wrote and played: “Laughing,” “These Eyes,” “American Woman.” It’s on every one of those songs.

And where did you get it?

I would go downtown to Portage Avenue. Everybody went to the Bay and walked along Portage to Eatons. In between there were clothing stores, record stores and music stores. And I would go and look in the window and look at this orange Gretsch guitar that Chet Atkins played, Duane Eddy played, Eddie Cochran played, Chuck Berry even played one on American Bandstand. And I would stand there next to Neil Young and look at this orange guitar and dream about having an orange guitar like that. Finally, I had enough money to go and buy the guitar, and Neil Young bought one at the same place.

And someone stole it in Toronto?

We were at a studio in Toronto, I think Phase One. We were doing BTO’s, I think, seventh album in 1977, and the guitar was stolen out of the hotel room, and it absolutely shattered me because I’d had this since I was a young kid. So when it was stolen, I called the Toronto police. I called the OPP, the Mounties. I checked every pawn shop on Yonge Street. There was no Internet or anything. So you basically had to go there. I went and did it, and all they said was, “Look we’re gonna tell you the truth about your guitar. It’s probably out of the country driven over to Buffalo or Rochester or something, and it’s gone. It wouldn’t be around here.”

How did they do it?

They said there was a gang that had been hitting all the motels. They made a deal with the hotel maid. They go into your room to clean it, and if you’re down having your free breakfast, you have an extra key in the room, and they throw it out the window. The gang gets the key and goes to the front lobby. He phones the room. If it rings and rings and rings, he knows you’re either paying your bill or you’re having your free breakfast. He’s got an opportunity to go to your room, knock on the door. If you’re checking out, everything’s at the door, your suitcases, your briefcase or your guitar. They open the door, grab whatever is close to the door, walk out to the end of the hall downstairs, and it’s into their truck and gone.

So what happened recently?

I was doing a YouTube live with my son Tal, and you know there are comments that come up on the side of the screen, and one read, “I found your Gretsch guitar.” So we get this guy’s name, William Long, who lives in White Rock, and we got a hold of him.

How did he find it?

He told me that he was working out of his house and had some free time so he started doing facial recognition of the Gretsch. So he basically Googled every orange Gretsch guitar sold in the world over the Internet in the last 20 years. And he said he’d found it in Japan belonging to a guy named Takeshi.

And how did he react when you told him?

So we emailed them. This guy is quite famous in Japan. He’s written songs for all the Japanese idols and he’s sold like 30 to 40 million records, and it took a few months before they read it. Then we get a note back saying, “Well, is this really your guitar? We know who you are, Randy Bachman. Tell me what songs this was on.” I told him and he goes, “My goodness, this is amazing. And so we do a Zoom, and he brings the guitar into the zoom camera, just like about a year ago. When I see the guitar, I can’t move. I’m basically … I’m in tears.

Did he agree to sell it back to you?

Well, I said the guitar was stolen in ’77. And he goes, “I was born to get your guitar and look after it for you. I will trade it back to you.” He said, “I don’t want a new guitar, I want his [Gretsch] sister. We are guitar brothers.” So when I go there to meet Takeshi, we’re going to go to the Gretsch factory there and do a concert. Then I’m going to go to the nightclub where he plays in a video that led to us finding the guitar and doing a performance and trading the guitars. Then I am going to bring the guitar home. It’s a real Cinderella story.