A wedding dress worn by J. Lo will be at a bridal rage room in T.O.
Skip to content 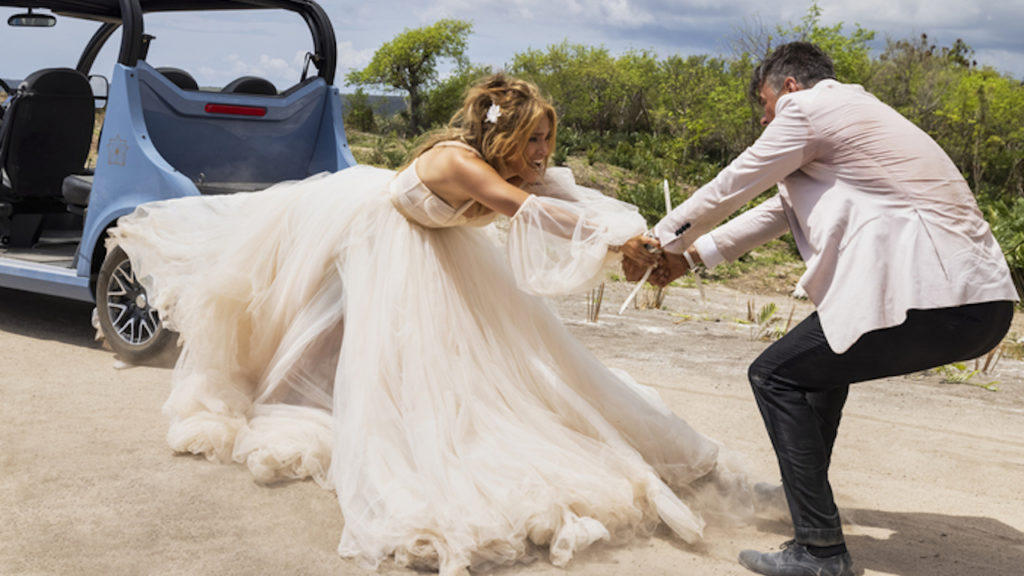 Canada’s largest bridal show is coming to Toronto this weekend, and attendees are in for a surprise. With Shotgun Wedding, a new movie starring Jennifer Lopez, coming to Prime on Jan. 27, the streaming service has set up a rage room perfect for exhausted bride-to-be attendees to de-stress — and it will feature the wedding dress worn by Lopez in the movie.

Happening from Friday to Sunday, Canada’s Bridal Show will be hosted at the Metro Toronto Convention Centre and will feature over 300 exhibitors, a bridal fashion show and plenty of prize giveaways. But anyone who has ever helped plan a wedding before knows that it’s not exactly easy. From financial stress to dealing with an overly particular bride, everyone visiting the bridal show might be looking for a chance to release that built-up frustration. Enter: the rage room.

Rage rooms were invented back in 2008 in Japan as a place to essentially throw a tantrum in a socially acceptable way. These rooms are filled with common household items, from plates to TVs, and visitors don the appropriate protective gear, grab a baseball bat or similar tool, and smash their anger out. Rage rooms quickly became popular worldwide, but it wasn’t until 2016 until Toronto got its first rage room. Currently, there’s only one rage room in Toronto — Go Smash in Scarborough, and it’s a bit of a trek, so the bridal show’s rage room could not come at a more perfect time for all the soon-to-be-marrieds across the country.

But why the Jennifer Lopez wedding dress? Well, Lopez’s new movie is a little more thriller than romance — in it, her character’s wedding gets put on hold when the wedding party is taken hostage, and it’s up to her and her husband-to-be (Josh Duhamel) to save the day. As one can imagine, rage of all kinds ensues — the kind that a wedding dress doesn’t withstand very well. Designer Galia Lahav had to create 28 copies of the wedding dress, two of which will be on display exclusively at the Toronto show.

The rage room, created in celebration of the upcoming film, will be free and bridal-themed (picture wedding stilettos as a smashing tool and a fake wedding cake and wrapped presents to destroy), and the wedding dress worn by Lopez will be there to keep you company while you get out all those frustrations over intrusive in-laws and expensive hors d’oeuvres. The room will fit two to four people per session, so bring along your bridesmaids and enjoy the rage together!

Tickets to the show cost $20 and can be purchased online or at the door.