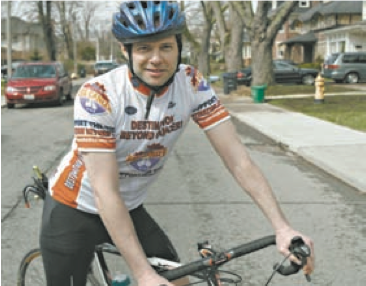 On June 13, David Sugarman will join 35 other cyclists on a trek across Canada as part of the second Sears National Kids Cancer Ride. The coast-to-coast journey from Vancouver to Halifax aims to raise $2 million for childhood cancer research.

“It seemed like too good a cause for me not to get involved with it,” says 40-year-old Sugarman. “One hundred per cent of the money goes to the cause.”

Nearly 1,700 Canadian children are diagnosed with cancer each year, and money raised from the ride will help support local oncology units and raise national care standards.

Unlike many other fundraising events, riders pay their own expenses, and money raised outside that goes directly to the charity. In addition, each of the cross-country riders are committed to raising $25,000. For Sugarman, founder of Succession Capital Corp., this means turning to friends and business contacts for support.

“When you tell people the facts, it’s not hard for them to open their cheque books,” he says.

Writing a cheque is one thing, pedalling thousands of kilometres is another. While Sugarman has been a cycling enthusiast for the past 10 years and previously rode in last year’s Ride to Conquer Cancer, he’d never taken on a challenge this big before. So he’s been training hard since his application to take part in the Vancouver to Halifax cycle was approved in January.

Sugarman and his fellow riders expect to travel about 300 kilometres a day during the 12- day event. That’s on top of the more than 7,000 kilometres pedalled during training.

The training process has been a challenging one for Sugarman, who is often on his bike for two to six hours a day.

While it can get monotonous, Sugarman has been getting together to train with a few other riders in the event. They work with a professional endurance trainer and have a nutritionist working with them as well.

“It’s really tough, but you have to be dedicated,” Sugarman says,“and to see the benefits of what you’re doing and why you’re doing it.”

When not rigorously training, Sugarman enjoys spending time with his young daughter and wife Laurin, who calls herself his “biggest fan.”

Post City Magazines salutes David Sugarman for putting the pedal to the medal for medical research.