Ahead of the 2022 Queen's Plate, here are all the times the Queen has visited Toronto for it - Streets Of Toronto
Skip to content 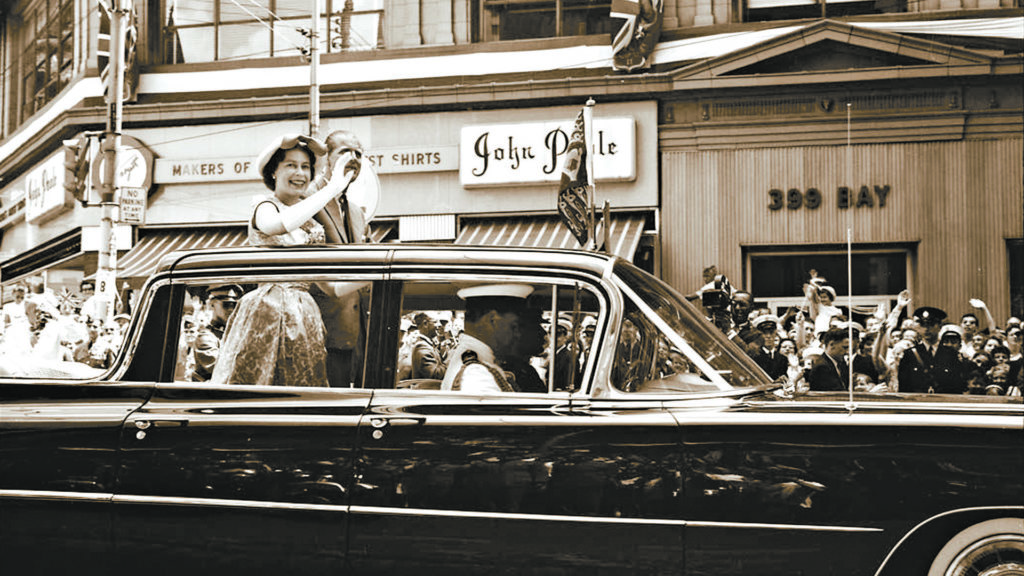 There is magic happening at Woodbine this weekend. When the Queen’s Plate gets underway and the pageantry of the racing day is upon us, there is something special in the air. Now, when royalty is actually on hand for the occasion, it is the stuff of legend.

The Queen’s Plate was inaugurated, with royal blessing, on June 27, 1860, at the Carleton Track in Toronto, near what is now the corner of Keele and Dundas Streets. The plate is the oldest thoroughbred horse race in North America, and the original purse awarded was a whopping 50 guineas. The original winner was Don Juan, ridden by jockey Charles S. Littlefield and trained and owned by James White.

A year prior, a couple of gents by the names of Sir Casimir Bzowski and Thomas Patteson, of the Toronto Turf Club, petitioned Queen Victoria for a plate to award at a race in Ontario.

The goal was to legitimize the sport of horse racing, which had apparently fallen on rough times in old Upper Canada. Joseph Duggan, owner of the Woodbine Race Course, enlisted T.C. Patteon, then Toronto’s postmaster, in a last-ditch effort to save his beloved sport. And save it he did. By getting the royal nod, horse racing was established as a Canadian institution and a sport of royalty.

The race has been held at Old Woodbine (renamed Greenwood Raceway and Greenwood Race Track over the years) at Queen Street East and Kingston Road for much of its existence. In 1994, the Queen’s Plate moved to its current home at the Woodbine Racetrack in Etobicoke.

In 2006, Josie Carroll became the first woman trainer to ever win the Queen’s Plate.

The purse has improved somewhat since the 19th century, with the winner now taking home $1 million. The race will be held this year on Sunday, Aug. 21, with Moira as the early favourite.

Four times in the illustrious history of the Queen’s Plate, has the Queen, Elizabeth II, actually visited the humble stomping grounds of the Woodbine Racetrack: 1959, 1973, 1997 and 2010. In addition, there have been numerous appearances by a representative of the monarchy, such as the Queen Mother.

Queen Elizabeth II’s first official visit to Toronto dates back to 1959 (though she was here as a princess in 1951 and as Queen in 1957 to Ottawa) when the city was included in her “royal tour” of Canada. The Royal Couple spent a significant amount of time in the area, including a visit to the Woodbine Racetrack to take in the 100th running of the Queen’s Plate horse race.

The Hospital for SickKids was visited by the Queen during her 1973 tour of Toronto. She also made her second appearance at the Queen’s Plate during this visit. She would attend again in 1997.

In 1984, the Queen visited the city once again. She formally dedicated the Nathan Phillips Square Peace Garden during the visit as well as opening the Queen Elizabeth II Terrace Galleries, as part of a major expansion at the Royal Ontario Museum, and opened the Metro Toronto Convention Centre’s north building, among other things.

In 2002, the Queen was in town as part of a tour to celebrate her Golden Jubilee. During her stop in Toronto, she visited such places as Exhibition Place and Sheridan College. A special concert was held in their honour at Roy Thomson Hall featuring performances by Evelyn Hart, Rex Harrington, Cirque du Soleil, the Tragically Hip and the late Oscar Peterson.

Queen Elizabeth II and Prince Philip have visited the country and Toronto on many occasions. Prince Philip has visited Canada more often than any other commonwealth country.

In 2010, the Royal Couple visited the Woodbine Racetrack for the Queen’s Plate for their final visit, during its 151st running.

Though the Queen won’t be in town this year, the 163rd Queen’s Plate is guaranteed to be an exciting one nonetheless.

For the story of how this Woodbine jockey met his match, click here.