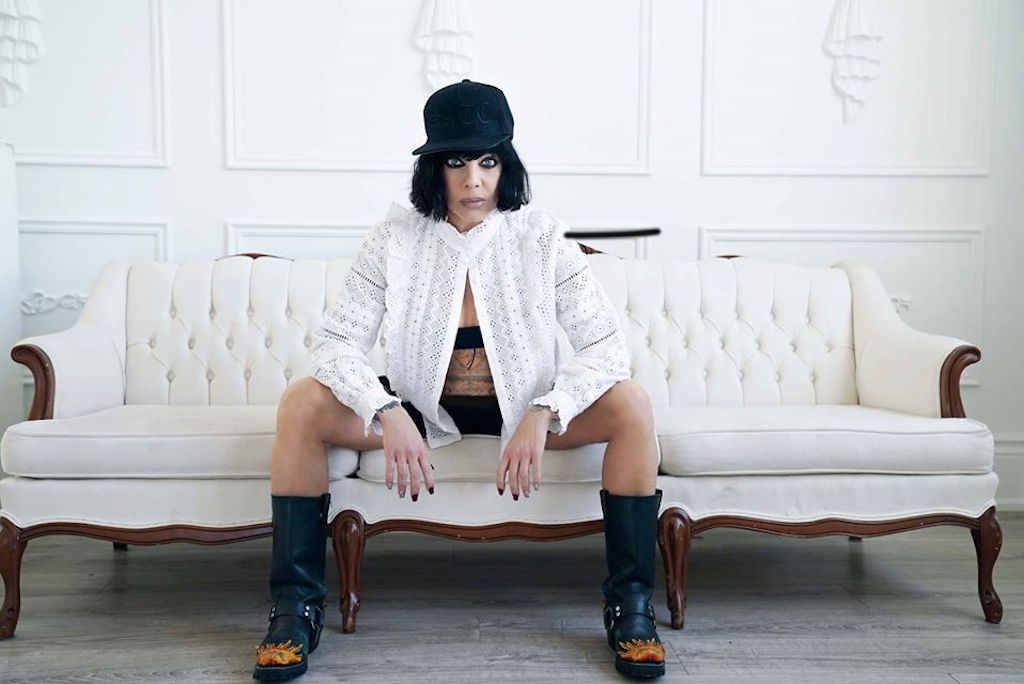 Bif Naked is an iconic Canadian rock star and something of a spiritual guru for those who follow her social media feeds. The first single “Jim” off her upcoming album is now out and she also has a book of poetry and cartoons coming soon called Razorblade Chewing Gum. Her spring tour is no longer, but we decided to check in to ask her to tell us about a few of the books she loves.

Here are five books that matter to her:

Canadian poet Irving Layton changed my life, after discovering him when I was 15 years old. This book was the first book I had ever stolen from my high school library, and only the second thing I have ever stolen in my entire life (the first being a small package of Wrigley’s Juicy Fruit Gum from a grocery store in The Pas, Manitoba, in 1977). This book, published in 1969, was the result of Layton’s journal keeping discipline mixed with poems, which he describes as his “1968 journal exploding into observations, aphorisms, and poems.” It blew my mind and sent me on my writing path for life. It is equal parts funny and moving, and I began collecting the works of Layton from this time, and currently own 29 of his books (32 if you count the ones I carelessly loaned to paramours). My Layton collection is all I wish to be buried with unless I donate them to a hospice library. I thank Irving Layton for my love of language, writing, and misadventure.

The Emperor of All Maladies by Dr. Siddhartha Mukherjee

When this book originally came out, in 2010, I was still experiencing much fallout from my own cancer treatments for breast cancer, which I was diagnosed with just three years before. My time as a cancer patient was transformational for me, as I became a hospital volunteer, a peer support volunteer, and a casual medical translator for my fellow chemo patients. I began to feel as though I missed my calling. Reading this elegantly written, riveting account of the history and biography of cancer was hugely meaningful to me. With this book, I reignited a joy of learning, and gleaned so much insight and inspiration surrounding cancer, its history, pathology, treatment protocol histories, and the practitioners of medicine. It is no wonder that Dr. Mukherjee won so many awards for this book!

Harry Leslie Smith was a freedom fighter. His life’s work and all his writing and calls to action should inform all of us. This book was a tremendous motivator for me, and I often use it as a reference when talking to my fellow social activist friends. Harry’s words always move me, despite my unfamiliarity with the British parliamentary activities and the election manifestos of the many players, and I always look to his activism as a benchmark. Harry Leslie Smith was fighting injustice long before the armchair activism of today’s social media whippersnappers became fashionable. His son, John, referred to his late dad as “the world’s oldest living rebel” and it’s perfect.

Lost and Found by Sam Thiara

Sam Thiara’s story is true. He really did travel to India with only a faded photograph as his compass to find his grandfather’s village. Beautifully written, he takes us with him along the motorways, through crowded bazaars, into crowds praying at temples, and to the serene rural villages where he almost gives up his quest for the truth. Sam’s real victory is in the journey, and in turn, the reader champions him and rides the emotional roller coaster beside him. I loved this story so much, my praise for Sam Thiara’s book was included within the covers! I wrote, “Through his writing, I feel the very pulse of India’s heartbeat through Sam’s heart. In his search for his lost village, he actually finds himself. In this unbelievable story, along the way, I found myself, too.”

Living Your Yoga by Judith Lasater

Yoga has been a part of my life for more than 35 years, and it helped me stay connected to, what I felt was, my Indian birthright. Being born in New Delhi, and growing up as an adopted kid (and the only Canadian in my family) I had no stronger connection, culturally, than India. Despite my whiteness, in my childhood, I felt very Indian. As I grew up and matured, my rational thinking helped me understand my desires and needs for this cultural identity, and I would say that besides food and music, yoga was the greatest connection I found. Reading ancient texts like Bhagavad Gita and Yoga Sutras lay a foundation for my spiritual yoga practices, but Judith’s book, Living Your Yoga brought the spiritual into my everyday. From the time that I first read this book (around 2000) to the many times since that I re-read and enjoy every page, Living Your Yoga continues to be a marvellous guide to keep me delighted by the wonders of the everyday gratitude I can cultivate — on, and off, my yoga mat.