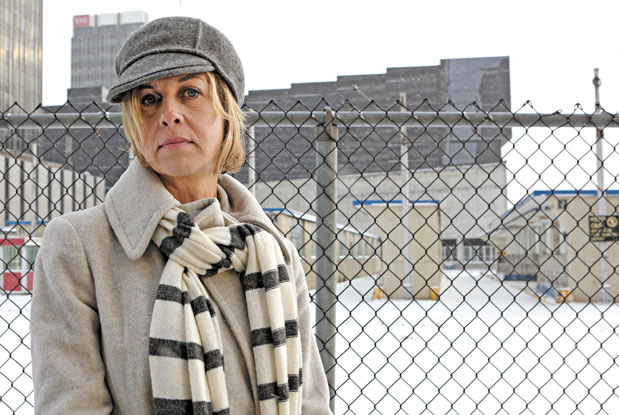 You may know it as “Young and Eligible” or you may shorten it to “Yonge and Eg,” but no matter what you call it, the intersection of Yonge Street and Eglinton Avenue has become a battleground for clashing ideals.

The major midtown intersection has been a breeding ground for high-density development over the years, with an influx of condominiums being built around the Eglinton subway station and more on the way. The upcoming Eglinton-Scarborough Crosstown LRT is expected to boost numbers even more.

Some of these developments have caused friction between developers and residents of the neighbourhood’s side streets, many of whom want to maintain a low-density character for Yonge and Eglinton.

One of the most contentious pieces of land near that intersection is the former site of the Toronto Transit Commission [TTC]’s Eglinton bus barns.

The former bus garage now lies inactive behind a chain-link fence. Although a part of the property has already been declared surplus, the majority of the lot is still awaiting declaration.

TTC chair Karen Stintz is in no hurry to declare the land surplus, and she says that she also is under no obligation to make the declaration by a particular date. Stintz, also a Toronto city councillor for Ward 16, wants to take the time to discuss appropriate visions for the site.

However, there may be pressure from Build Toronto, an agency of the city, for the TTC to relinquish the land.

A sketch of the bus barns property, drawn January 2012, shows several tall residential buildings, with heights reaching to 40, 50 and 60 storeys. Other structures include a five-storey hotel and a two-storey mall. Build Toronto has said the plan is outdated, but its existence was enough to rankle the local community.

“There actually already is a plan to develop the bus barns with a park that will be included within it,” said Stintz. “In the last term of council, [former Ward 22 councillor] Michael Walker had brought forward a more comprehensive plan for that block that included a more modest proposal for residential and a park and other uses.”

The plan was approved by council, but discussions have continued between Stintz, her fellow councillors, Build Toronto and other stakeholders.

“They [Build Toronto] haven’t really incorporated any of Michael Walker’s ideas into their planning,” said Stintz. “From my experience with Build [Toronto], they look at it as a blank slate.” She added, “They’re also including other properties that weren’t included in Michael Walker’s planning exercise. They’re looking at the Canadian Tire building as well as the [TVOntario] building.”

Bruce Logan, vice-president of corporate affairs and operations for Build Toronto, said that currently its only role is to proactively stay informed of the progress and study how the transit work could suggest a thoughtful new integrated mixed-used development for the site and that they will meet the expectations and interests of the community.

Coun. Josh Matlow believes that community consultation is the key to success.

“I have been very clear with Build Toronto that they need to go through a public consultation with our communities as to what kind of development we’re going to agree to have on that site,” he said. “There is no proposal that I will ever support that doesn’t include a public space as part of the agreement.”

Ben Daube, president of nearby Sherwood Park Residents’ Association, said that he has been calling for a specific, long-term plan for the neighbourhood similar to the one drafted for Yonge and Sheppard Avenue, which stipulates height and density maximums for future development. Currently, Yonge and Eglinton has no limits in place to control development, he said.

“The bottom line is without necessary planning the quality of life at Yonge and Eglinton is going to go down. Guaranteed,” he said. He would like Toronto to slow down area development until the Yonge relief line has been built.

Similarly, Matlow’s own long-term vision for the site is more than just a jungle of concrete and glass. “Yonge and Eglinton is one of Toronto’s most important junctions, and it will continue to become even more important as the underground LRT is built,” he said. “We [need to] create people-friendly spaces.”

His short-term goals for the area are more concrete. During the construction process of the Yonge station for the crosstown LRT — which will interchange with the Eglinton subway station and create a more complicated, lengthy construction process — the site will not only be beautified, but used as a central information hub to keep the public up to date.

“This will be happening soon,” said Matlow. “There will be new additions to the periphery of the site that will hide a lot of the equipment, that will have information for the public about the new crosstown LRT … as things change through the construction process.”

Even if relinquished by the TTC, the land would not be suitable for development for several years due to the construction of the LRT.

“I don’t understand what [Build Toronto’s] interest in this land is at this time,” said Stintz. They don’t need the TTC’s surplus land. They have enough that they can do in other areas of the city.”

Although Stintz agreed the area has value to be capitalized on, she doesn’t see a need for aggressive development.