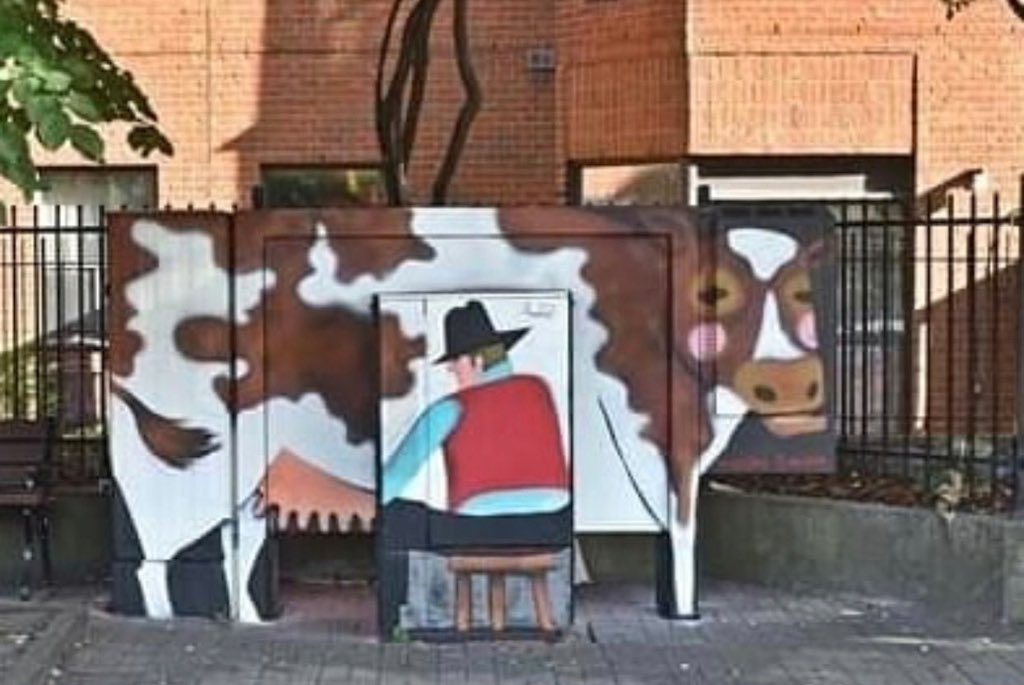 Cows once marched down St. Clair Avenue West toward a rather dubious fate. Today, a bright mural of a cow being milked is a nod to the rich history of the neighbourhood.

The cow mural is part of a new installation of Bell utility boxes turned art and spearheaded by city councillor Josh Matlow. The paintings are a reminder of how art can lift spirits during tough times.

Matlow worked with interested artists to create a series of murals to beautify the neighbourhood.

“When we rent or buy houses, most of us try to make those living spaces more beautiful. We should design neighbourhoods the same way. We should make them beautiful,” Matlow said.

The Bell box project is just one of the recent community initiatives created to help people stop and smile. Another art-based project getting noticed is a series of colourful pebbles placed along the Beltline Trail called Positivity Pebbles.

The Positivity Pebble project was the brainchild of two high school students, Alya Seker and Alyssa Pather, seeking to brighten the daily walks of people exploring the Beltline Trail.

The two friends decided to paint faces and other works of art on small pebbles placed strategically throughout the trail.

“When quarantine started, we were both equally upset that we couldn’t see each other. However, when it was deemed safe enough to meet up, physically-distanced with masks, we took the first chance we had and decided to start a project together, not only to lift each other’s spirits but others’ spirits as well,” Seker says.

Although Seker and Pather started the Positivity Pebble movement, they’ve inspired others to create works of rock art too.

“We’ve seen over 50 pebbles that were painted by children and adults, and we love them all,” the pair said.

Art seems to be one of many ways that communities are staying connected during the ongoing pandemic. Many artists like Seker and Pather are taking to painting to spread joy, while others are focusing on music.

“Artists have the ability to share talents and lift community spirits,” Matlow said. “While sometimes the curtain seems like it’s on fire, there are a lot of silver linings too. Sometimes, the little things in life are the big things.”