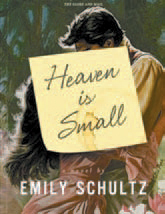 THE MOST OFTEN used word to describe the work of Emily Schultz has been “promising.” But with the publication of her third book, the time has come to lose the promise and accept that Schultz is a talented writer, plain, simple and staying that way.

Her new novel, Heaven Is Small, is a gem, inspired by Schultz’s stint as a night editor at Harlequin in suburban North York. Its lead character, Gordon, travels to a similar destination from his downtown abode after he dies. The suburban, corporate headquarters of the Heaven Book Company is his own, personal afterlife. And he has to take public transit to get there!

Of course, Gordon doesn’t know this at first, and that’s half the fun. To make matters worse, good old Gordon has literary aspirations of his own. This, combined with his stinging divorce from Chloe Gold, who has since hit stardom as the writer of chick lit, makes Gordon a very unhappy camper.

“Gordon was inspired by every writer I know,” Schultz explains. “He’s such a schleppy guy, and most writers I know are like that. I’m included in that as much as anyone. He’s the Charlie Brown of writers flung into romance land.” A land Schultz found herself in during a short stint at Harlequin in 2000–2001.

“I have nothing against them,” says Schultz.

“It was a strangely surreal place. It was a good place to work, and because I worked the night shift I didn’t have to pretend to like the books.”

Schultz grew up in southwestern Ontario, heading to Windsor for university before moving to Toronto and attending the magazine publishing program at Centennial College.

She published her first book in 2002, a short story collection entitled Black Coffee Night (Insomniac Press). Her follow-up, her debut novel, Joyland, was published in 2006 (ECW Press). An ode to a video arcade in her native Wallaceburg, Schultz structured the novel to approximate the electronic games of that ’80s era — think Centipede, Galaga, Ms. Pacman.

Named one of Canada’s top writers under 30 by the Globe and Mail, Schultz is hitting her stride as a novelist.

She will be reading from Heaven Is Small around town this summer and is hosting Joyathon, in conjunction with the Scream Literary Festival, on July 9 at the Stealth Lounge in Yorkville.

WHAT IS ACTOR MICHAEL BIEN READING?

“I’m reading Five Past Twelve by Robert N. Shapiro, which covers a year in the life of Jack Geary. This book makes me happy that I went to theatre school. I also read When You Are Engulfed in Flames by David Sedaris. The stories range from a childhood babysitter to tapeworms. He’s such a jerk and isn’t afraid to let you know it.”

Michael Bien stars in Goodbye Rounds at the Toronto Fringe Festival this month.