Potential mega-development in midtown - Streets Of Toronto
Skip to content 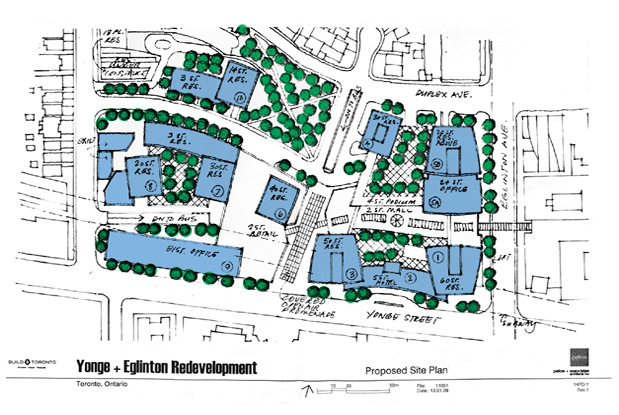 Though Toronto Transit Commission’s (TTC) bus garage at 24 Eglinton Ave. W. is no longer operating and was set to be declared surplus in late 2012, the decision was deferred by TTC chair and Toronto city councillor Karen Stintz — and it may continue to be deferred for quite some time.

With no set deadline for when the TTC must relinquish control of the land, Stintz and fellow city councillor Josh Matlow (Ward 22) are hoping to use that time constructively to work with Build Toronto, a City of Toronto agency.

“We’re just working with Build Toronto on what they plan to do before we declare the land surplus,” said Stintz. When asked if there was a specific date by which the property had to be declared surplus, Stintz stated that there was not.

Though unable to propose any formal site plans while the TTC maintains ownership of the land, Build Toronto has floated some ideas informally — some of which aren’t sitting so well with Matlow.

He feels that his values aren’t aligning with what Build Toronto wants: “They’re trying to jam-pack as much as possible into that whole block,” said Matlow, who favours open space and public squares.

“More people are moving into the area, and therefore, we need to create people-friendly spaces,” he said. “There needs to be a great public space for the local community. That’s how great cities are planned. Go to Paris, London, Rome or New York, and you will find great public squares and parks near major junctions. And we haven’t done that in Toronto.”

Those green spaces are a sharp contrast to what Build Toronto has sketched out on one preliminary plan obtained by Post City Magazines from councillor Matlow’s office. Those plans include a five-storey hotel, two-storey mall, four-storey podiums and residential towers stretching 20, 30, 50 and 60 storeys. According to executive assistant to Coun. Matlow, Andrew Athanasiu, these preliminary sketches are the only plans that have been presented to the councillor.

All parties involved are hoping for co-operation with one another as the discussions stretch on. “There are many stakeholders included,” explained Natalie Pastuszak,  stakeholder and communications associate for Build Toronto. “Metrolinx, TTC, councillors, potential tenants, potential leaseholders, other development partners, communities — so any delays are probably a function of making sure all those interests from all those different stakeholders are involved. We definitely want to work in a collaborative approach.”

Stintz is determined to make sure that every concern is addressed before the TTC relinquishes control of the land. “As TTC chair, I’m charged with making sure that any of the assets that the TTC transfers over are developed in an appropriate way,” said Stintz, who also said that she has not seen these drawings — or any others — from Build Toronto.

“I can’t imagine anyone would want a hotel at Yonge and Eglinton,” she said after being informed of the sketches. “If they’re actually proposing a hotel, I find that very interesting.”

But Stintz doesn’t seem worried about any unofficial musings. “We own the land,” Stintz said matter-of-factly, referring to the TTC. As long as the TTC holds ownership of the bus barns, none of these ideas can come to fruition.

Though Matlow insisted that the area is in need of more outdoor public space, Pastuszak stated, “Many of our developments focus on public realm and green space.”

“I want Yonge and Eglinton to be one of the great intersections in the city,” Matlow said. “I’m already working on designs for that space, and Build Toronto needs to work with us rather than the reverse.”

According to Matlow, transparency and community consultation is key.

“I think Build Toronto doesn’t understand the concept of public consultation,” he said. “You’ve got to slow your horses down. There needs to be a consultation with the community. This is not just about building as big and as much as you can. If they are willing to work in a transparent and open way with residents, then they will find that both councillor Stintz and I will be at the table with them.”