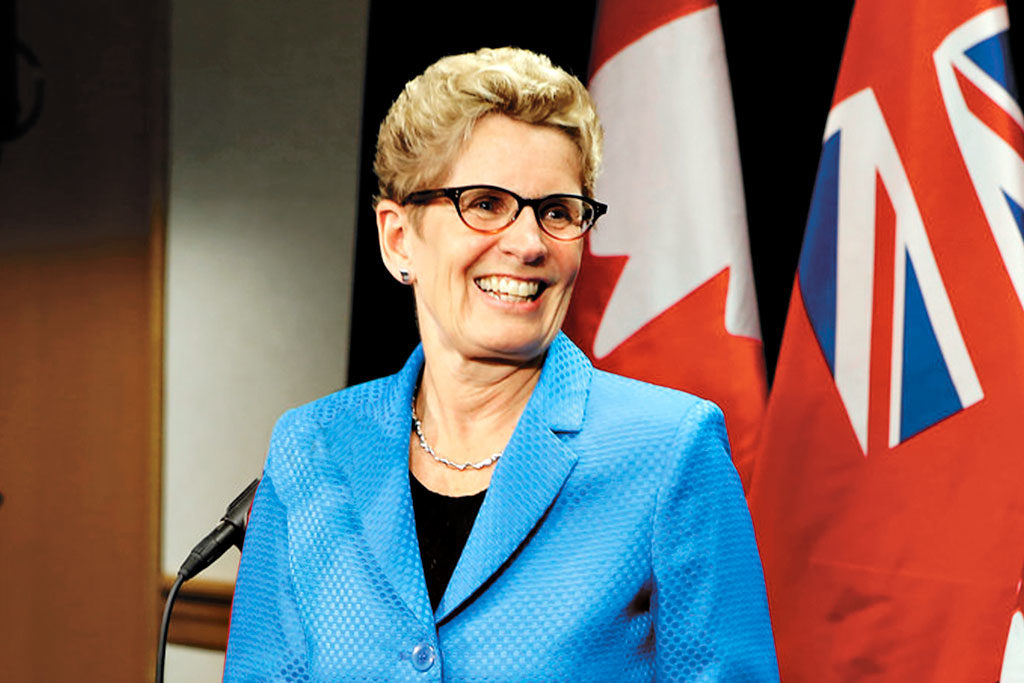 New initiatives show Premier Kathleen Wynne is ready to buck the conservatism trend with policies that appeal or pander to the province’s social activist base — especially in big cities like T.O. — with policies not unlike those of the NDP.

Are you surprised at the backlash to some of your policies? Do you feel that there is a bleed over from rising conservatism in the U.S.?
I wouldn’t say so. I think that we in Ontario are looking for government to be fair, to understand people’s needs and to put in place supports that people need. These aren’t partisan issues. I believe that most people in Ontario see the utility of those policies and are looking for that kind of support for their families.

But approval ratings aren’t exactly sky-high.
Polls are what they are. I can’t control what individuals think of me personally or what they think of my government. But we are listening to people, we are responding to people’s needs, and we are putting in policies that I hope will help them in their day-to-day lives. The politics of polling and party approval, those are things that get worked out at the ballot box, and we’ll see what happens.

How did universal basic income go from utopian pipe dream to something that we’re actually attempting to do here in Ontario?
The notion of basic income has been around for over 30 years. It seemed to me that this is an idea whose time had come, to see if there is a better way of supporting people who are having real challenges. As we look at the changing economy, with artificial intelligence and new technologies and the displacement of people, we need to figure out if there are things we should be doing as a society to support people as they make transitions in this new economy.

Is it economically feasible though?
That’s exactly why we’re running the pilot. I want to see what the outcomes are going to be. There was a pilot run years ago in Manitoba, and it looked like there were some promising results. But there wasn’t a proper follow-up, so we need to demonstrate that this new program can work.

What do you make of the concerns of small business owners who say a $15 minimum wage will put them under?
I’m hearing different messages. There are thousands of businesses in Ontario that already pay their employees more than $15 an hour, so they will be much less affected. There are some businesses that have concerns about the transition, and so do I, particularly for very small businesses. So we’re looking to bring out some supports in the fall to help them through that.

Speaking of small businesses, how do you see them fitting into the plan to legalize marijuana?
We haven’t landed on exactly what the model will be in Ontario. There are still questions that have not been answered by the federal government, questions around roadside testing and other implications. What I will say now is that I want to see good, strong government regulations. There will be a government role to play in the distribution and regulation of cannabis, but what that model might look like, I can’t tell you right now. I have said in the past that the LCBO should be involved, and whether it’s the LCBO or the Alcohol and Gaming Commission of Ontario, those questions are up in the air.

Will Ontario have a plan in place by next year? That is coming up quickly.
We have said that we’re working toward a July 1, 2018, implementation. If we are not able to get answers to some of the questions that we’ve asked the federal government, it will be more challenging to meet that deadline. But Ontario is on track to be ready by then.

Do you anticipate that this will generate income that can be used for infrastructure and other benefits for the province?
That’s an interesting question. We actually have not projected any incremental income from the sale of cannabis. We need to recognize that this is about public safety and protecting youth. Those are the big concerns that I have right now. I think what you’re going to see is a need for investment in enforcement and in support for municipalities as they implement changes.

We’ve also seen a concerted effort to cool down Toronto’s real estate market. Why was it important to intervene?
It seemed like there was a real heating of the market,  and we wanted to address areas of concern. For example, the non-resident speculation tax was about making sure that, as people buy places to live, that those units are actually used as places to live. Recent data shows that many people still want to buy in Ontario. The goal was to make buying and renting a home more affordable, and it seems the plan is having that desired effect.