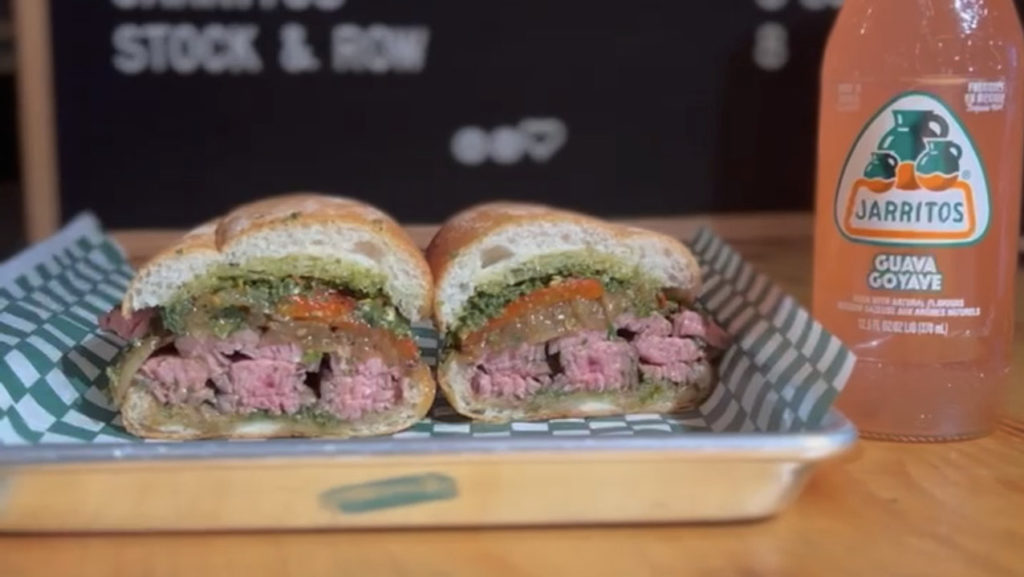 What started as a backyard BBQ venture has moved into the creative and sprawling Assembly Chef’s Hall, a chef-driven community market that’s currently home to more than 15 restaurants and four full-service bars.

Doing one thing extremely well has proved the key to success for Bear Steak Sandwiches founders, Ricardo Barrientos and Aki Erenberg. The duo began whipping up flank steak and chimichurri sandwiches (named The Sammy) back in spring 2021 for friends, family and neighbours in their Little Italy neighbourhood before expanding to offer online pre-orders.

Assembly Chef’s Hall has been a vibrant, communal space full of uniquely handpicked food vendors since it opened its doors back in 2017 and Bear may have slipped in at the perfect time. With more and more people returning to work, foot traffic has increased in the centrally located space which shares a home with the Google Canada HQ.

Bear is in good company, too, rubbing shoulders with other culinary faves like authentic Mexican joint Colibri and coffee shop, Lost Coffee. What’s more, the move to Chef’s Assembly Hall gives the pair the space they needed to get creative in the kitchen and introduce new menu offerings.

“When we began this operation out of Ricardo’s backyard, we intended to stick with what we knew best and keep our menu streamlined,” says Aki. “Now that we’ve moved into a legitimate space, we wanted to use this opportunity to bring another sandwich to the menu, as well as offering fries…you can’t have a sandwich without fries, right?”

Bear’s new and improved menu still offers the fan favourite that shot them to sandwich stardom, in addition to a new creation, called The Tosty (pronounced “Toasty”).

The pair describe the Tosty as a revamped Tosta Mista ham and cheese sandwich popularized in Portugal. The Tosty is packed full of bold flavour, featuring red pepper jelly, mortadella, provolone, cheddar, and caramelized onions, piled onto a Portuguese roll and then toasted on a panini grill.

Despite all the change, one key value remains a priority: using only locally sourced, quality ingredients. Bear Sandwiches sources all of their meat and Portuguese rolls on College Street at Nosso Talho and Golden Wheat Bakery and has even partnered with Prince Edward County-based cider company Stock & Row to offer their cold tea cider – a perfectly crisp complement to the rich and flavourful menu items.

While Aki and Ricardo are trying to take things one day at a time, they are hopeful a permanent spot at Chef’s Hall may be on the horizon.

“Right now our main focus is absolutely killing it at Chef’s Hall, so no plans to pop-up elsewhere at the moment. The ultimate goal is to become a mainstay at Chef’s Hall in the New Year and begin to expand from there.”